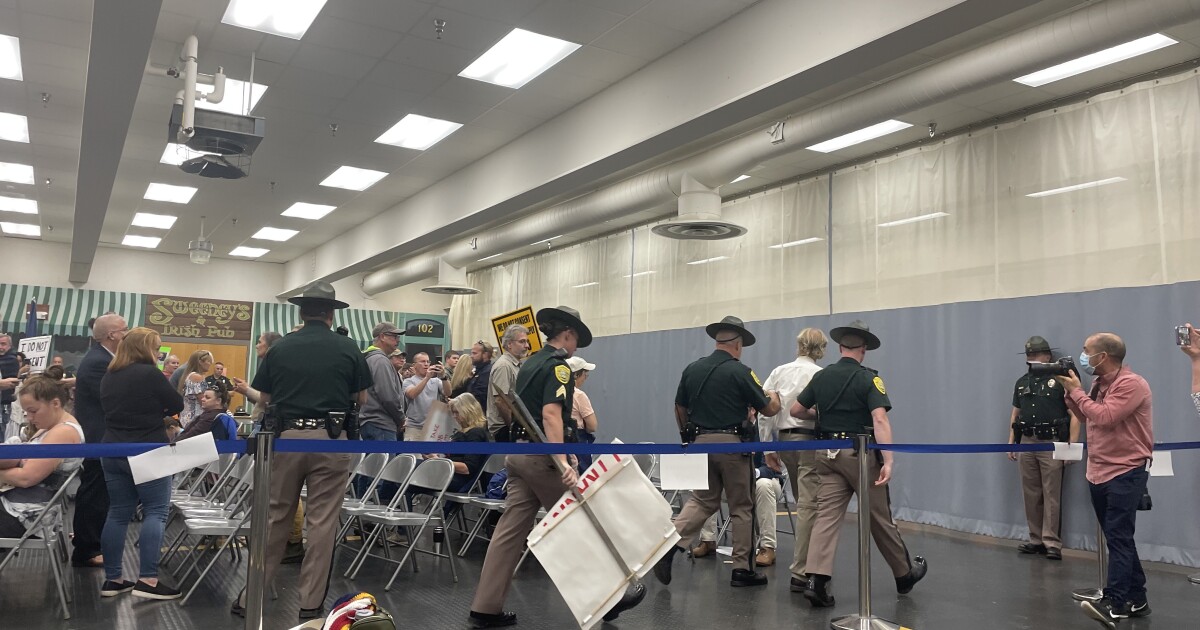 The vaccination contracts that sparked disruptive protests that shut down an Executive Council meeting two weeks ago were voted down at Wednesday’s Council meeting.

Get NHPR’s reporting about politics, the pandemic, and other top stories in your inbox — sign up for our newsletter today.

The scope of the two contracts included $27 million in federal funding that would have created 13 state health department positions for immunization work. The positions included vaccine outreach, assistance for health care providers navigating the logistics of vaccines and support for data entry on the state’s immunization information system. Health officials had described the contracts, and the money tied to them, as key to boosting the state’s vaccination efforts.

Councilor Cinde Warmington, a Democrat, was the only councilor to vote in favor of the funding. All four Republicans on the council voted against the money.

The vote followed a period of intense questioning of Department of Health and Human Services Commissioner Lori Shibenette, an angry back and forth between Gov. Chris Sununu and several councilors, and a long statement from Councilor Janet Stevens hailing the importance of vaccine equity and combating disinformation, meant to preface her “no” vote.

In a statement issued after the vote, Sununu said the “vote showed a reckless disregard for the lives we are losing while they turn away the tools our state needs to fight and win this battle against COVID.”

Speaking to reporters later in the day, Sununu said he pushed fellow-Republican councilors to support the contracts as hard as he could, but described the party-line vote against the money as driven by disinformation.

“At the end of the day, there was no rational, logical reason to say ‘no’ to these contracts,” Sununu said. “Every argument that the council attempted to bring up was shot down immediately.”

Opponents to the federal funds, meanwhile, like Kelley Potenza of Rochester, said Sununu has disregarded what they say is the will of the people.

“The people who want the shot have gotten the shot, they want the shot,” Potenza said. “Leave the other freaking people alone, we are done.”

Wednesday’s meeting took place at the state Police Standards and Training Council in Concord, a location officials chose in the wake of protests that required the last Executive Council meeting to be postponed. Officials said it was secure and large enough to accommodate members of the public, press and officials.

About 170 protestors filled the public section of the room. They made their opinions known early on in the meeting when federal funding for case management for refugees 60 years and older was discussed. Some protestors shouted they did not want refugees in New Hampshire.

As disturbances continued, state troopers did not hesitate to make arrests and escort loud and unruly protestors out of the meeting. Sununu said in a press conference that nine people were arrested at the meeting.

The contracts rejected today had come under fire from protestors and coordinated right-wing groups last month, who falsely claimed that a standard section in the contract would increase federal control and oversight of New Hampshire’s public health efforts.

Both Attorney General John Formella and Gov. Chris Sununu addressed and debunked these claims. The two reiterated key points from Formella’s prior statement that the language had already appeared in items approved by the council in the past, is likely to appear on future items, and the language of concern does not bind the state to any sweeping federal demands.

The council did approve other federal funding for other COVID-19 vaccination efforts, including the expansion of a contract with On-Site Medical Services to provide mobile vaccines and funding to create a second mobile vaccine in partnership with ConvenientMD. Both efforts had been on hold following the cancellation of the last executive council meeting.

Other COVID-related funds were approved Wednesday too, including a retroactive contract with ClearChoiceMD for four public testing sites.

For protestors, the “no” vote on the contracts at the heart of their demands was a success. As soon as the contracts were voted down, the remaining crowd left the building, cheering.

This is a developing story and will be updated.