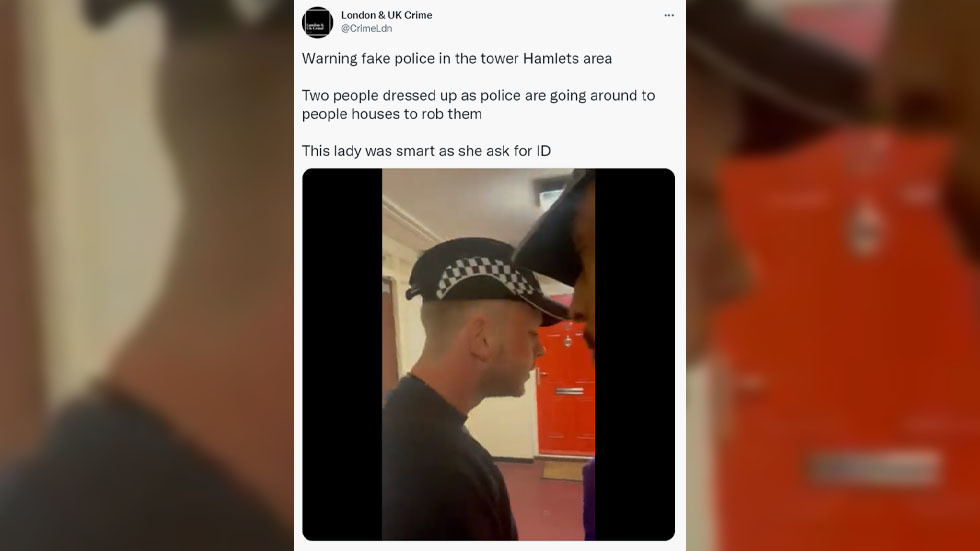 Two men dressed as police officers, armed with batons and handcuffs, allegedly tried to enter a woman’s home in London’s Tower Hamlets this week, before they were chased out of the area.

The targeted woman filmed the two men – who wore police caps, purple disposable gloves, and white sneakers – at her door after they allegedly tried to enter her home and refused to present identification. As the woman started to record the encounter, the two men hid their faces and became aggressive, with one of the fake officers threateningly drawing his baton and attempting to grab her phone.

Warning fake police in the tower Hamlets area Two people dressed up as police are going around to people houses to rob them This lady was smart as she ask for ID pic.twitter.com/8TJmYWn19G

Despite repeated attempts to intimidate the woman, the two men soon fled the area and pretended to call for backup through a fake radio, before sprinting away down a nearby road.

The disturbing video went viral in London on Thursday after being posted on social media by the grassroots reporting group London & UK Crime.

Look at him talking into the “radio” till the end 😂 that’s commitment. Where did they get those costumes?? 😂😂😂

I don’t know what the police look like over there, but I can’t imagine they dress like that… It’s funny that the one guy is talking into his fake walkie, yet getting no response back.Clearly they were there to rob them, thankfully they trusted their instincts.

Though some social media users argued that it would be unlikely for uniformed police officers to be wearing white sneakers, others highlighted the threat that the two men could pose to someone who is vulnerable, naive, or unable to fight back.

Tower Hamlets Police have not yet responded to the incident.

The issue of fake police activity has occupied the UK’s consciousness since the kidnapping and murder of Sarah Everard. Though her killer, Wayne Couzens, was a legitimate police officer, he used a fake arrest in March – citing Covid-19 lockdown restrictions – and even a police warrant card to get Everard into his car before she was raped and murdered.