Hezbollah leader Hassan Nasrallah on Friday warned Israel against unilaterally searching for natural gas in a disputed maritime region before any agreement between Lebanon and Israel is reached.

In a wide-ranging speech broadcast from an undisclosed location during a ceremony marking Prophet Muhammad’s birthday, Nasrallah said that while he would leave it up to the Lebanese government to negotiate an end to the dispute, his group would not tolerate Israeli searches in the disputed region.

Accusing Israel of casting a “greedy” eye over Lebanon’s natural resources, the terror leader said Israel was “mistaken if it thought it could extract these resources from the disputed area before negotiations are completed.”

“The resistance is capable of acting and will do so against any Israeli actions in the disputed zone,” Nasrallah said, accusing Israel of giving a company the go-ahead to begin explorations.

During his speech, Nasrallah also repeated his condemnation of the recent normalization deals signed between Israel and four Arab nations, urging the Arab world to protest such moves.

Israel and Lebanon have no diplomatic relations and are technically in a state of war. They each claim about 860 square kilometers (330 square miles) of the Mediterranean Sea as being within their exclusive economic zones. 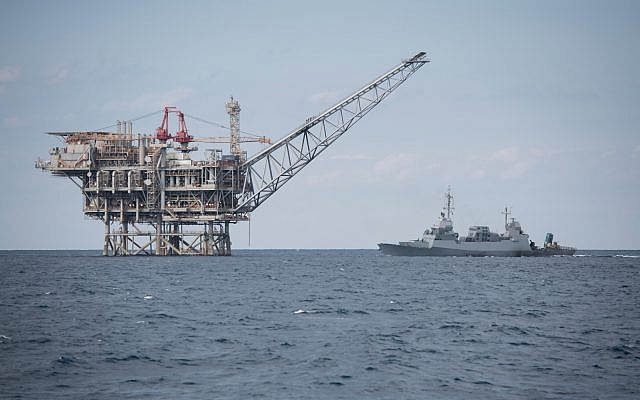 However, the US has been hosting mediation talks, with the last round held in May.

There have been signs the US was ready to resume its mediation.

US envoy Amos Hochstein arrived Tuesday in Beirut apparently in a bid to rekindle moribund talks.

The Israel-born newly appointed envoy to the US-mediated talks, a longtime close adviser to President Joe Biden, is also due to tackle Lebanon’s dire energy crisis in his meetings.

“Hochstein will also underscore the Biden administration’s willingness to help Lebanon and Israel find a mutually agreeable solution to their shared maritime boundary for the benefit of both peoples,” the statement said.

Hochstein’s selection for the post was reported earlier this month by the Axios news site, which quoted unnamed Israeli officials saying he was expected to also visit Israel soon. 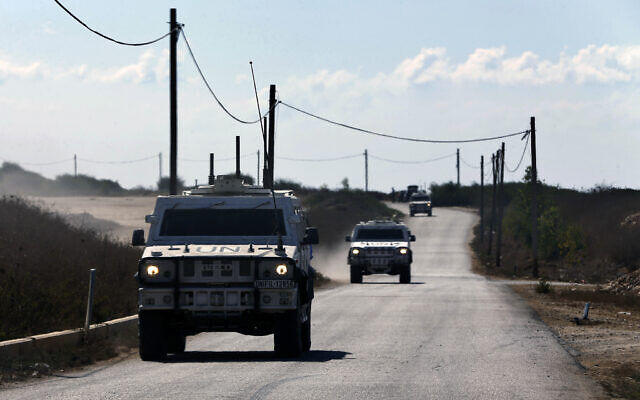 UN peacekeeping military vehicles patrol near the post where the indirect talks between Israel and Lebanon were being held in the southern Lebanese border town of Naqoura, Lebanon, on October 14, 2020. (Bilal Hussein/AP)

A State Department spokesperson noted at the time that Hochstein had previously been a mediator in the Israel-Lebanon maritime border dispute during the Obama administration.

Lebanon has sunk deep into an economic and financial crisis that started in late 2019 — a culmination of decades of corruption and mismanagement by the political class. The small Mediterranean country is eager to resolve the border dispute with Israel, paving the way for potential lucrative oil and gas deals.