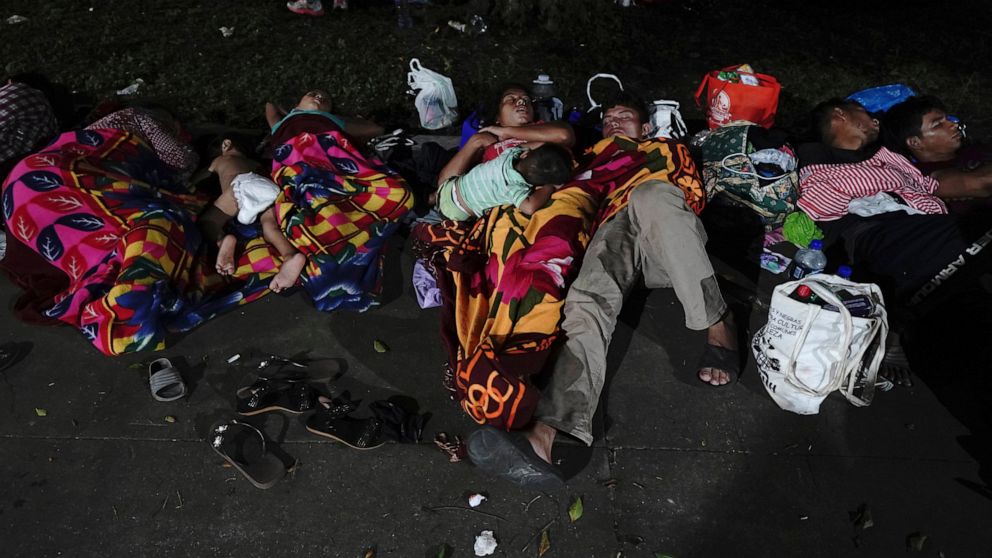 A group of about 2,000 mainly Central American migrants are continuing their mass trek from the southern Mexico city of Tapachula, reaching a town about 16 miles (26 kilometers) away

HUEHUETAN, Mexico — A group of about 2,000 mainly Central American migrants continued their mass trek from the southern Mexico city of Tapachula on Sunday, reaching a town about 16 miles (26 kilometers) away.

Migrants started out before dawn to avoid the burning heat. Mostly from Honduras and El Salvador, many were accompanied by small children. By midday on the second day of their march, they reached the town of Huehuetan, in southern Chiapas state.

Unlike previous marches, the one that started Saturday from Tapachula did not include as many Haitian migrants, thousands of whom reached the U.S. border around Del Rio, Texas, in September.

Tens of thousands of migrants from Honduras, El Salvador and Haiti have been waiting in Tapachula, near the Guatemalan border, for refugee or asylum papers that might allow them to travel, but have grown tired of delays in the process.

Mexico requires migrants applying for humanitarian visas or asylum to remain in the border state of Chiapas, next to Guatemala, for their cases to be processed.

Anthony Beltrandez, a Cuban who left his country in 2018 to go to Uruguay, had been waiting for 1 1/2 months in Tapachula for papers that would allow him to reach the U.S. border.

“But they took a long time,” said Beltrandez, a furniture restorer. So he decided to join the group of migrants who left Tapachula on Saturday.

“There has been a lot of heat, a lot of sun,” Beltrandez said of the walk.

On the first day of the march, the migrants pushed past a line of state police who were trying to stop them. There were minor scuffles and a small child suffered a slight head wound, but the migrants continued on their way.

They made it only a few miles (kilometers) to the nearby village of Alvaro Obregon on Saturday before stopping to rest for the night at a baseball field.

“We don’t want problems with anyone,” Beltrandez said as the group reached Huehuetan on Sunday. “We want to do everything peacefully.”

Police, immigration agents and National Guard have broken up smaller attempts at similar breakouts earlier this year. In August, National Guard troops in riot gear blocked several hundred Haitians, Cubans and Central Americans who set out walking on a highway from Tapachula.

In January, a larger caravan of migrants tried to leave Honduras but was blocked from crossing Guatemala.

José Antonio, a Honduran in the latest group who did not want to give his last name because he feared it could affect his case, said he had been waiting in Tapachula for two months for an answer on his request for some sort of visa.

“They told me I had to wait because the appointments were full,” the construction worker said. “There is no work there (in Tapachula), so out of necessity I joined this group.”

The marches are reminiscent, but nowhere near as large, as the huge migrant caravans that crossed Mexico in 2018 and 2019 heading toward the U.S. border.