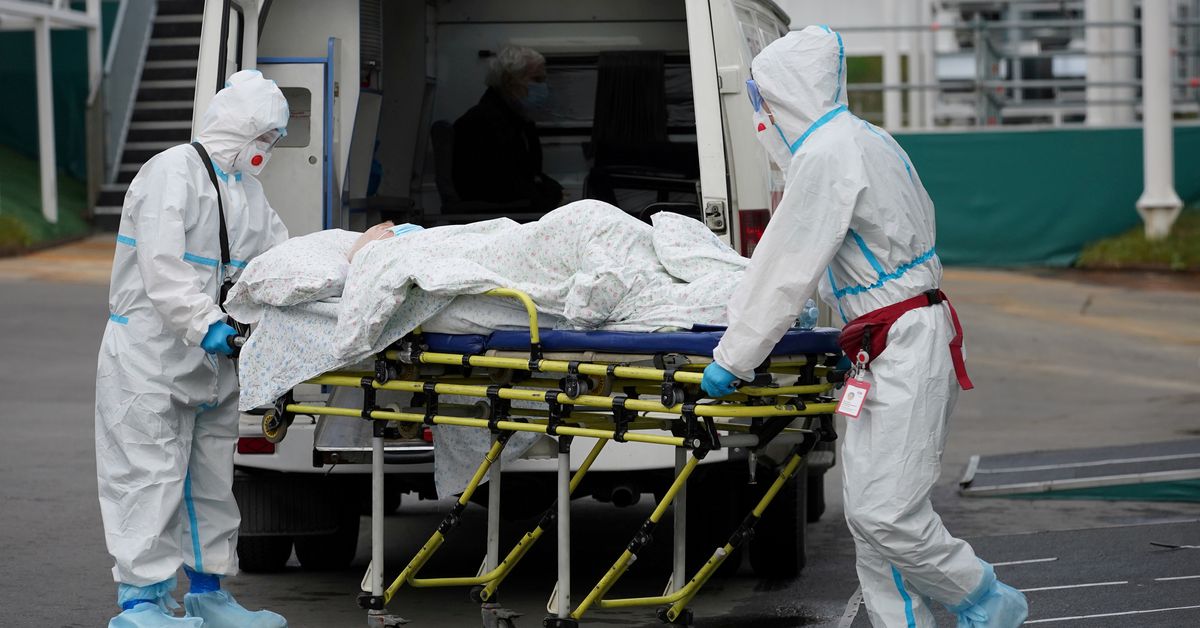 Medical specialists transport a patient outside a hospital for people infected with the coronavirus disease (COVID-19) in Moscow, Russia October 13, 2021. REUTERS/Tatyana Makeyeva/File Photo

MOSCOW, Oct 25 (Reuters) – Russia reported its highest single-day COVID-19 case tally since the start of the pandemic on Monday as some regions imposed a workplace shutdown to combat a surge in infections and deaths.

Faced with worsening disease rates and frustrated by the slow take-up of Russia’s Sputnik V vaccine by its own population, authorities are introducing stricter measures this week to try to slow the spread of the pandemic.

President Vladimir Putin last week declared that Oct. 30 to Nov. 7 would be paid non-working days but said every region could extend that period or start it earlier depending on the epidemiological situation.

Six regions, including the Samara and Perm regions east of Moscow, began their non-working days on Monday, TASS news agency reported. From this Thursday, Moscow will introduce its tightest lockdown measures since June 2020, with only essential shops like supermarkets and pharmacies remaining open. read more

The measures are not popular among some Muscovites who question whether the disruption is justified.

“I’m very sceptical about the lockdown because it hurts businesses first of all,” said a man who gave his name as Viktor as he walked in front of the Bolshoi Theatre, wearing a medical mask. “I’m an athlete, and gyms are closing. For people who live and breathe sport, it’s really bad.”

Moscow schools are also closed, and unvaccinated over-60s in the capital have been ordered to lock down for four months starting Monday.

Authorities in St. Petersburg, Russia’s second largest city, said COVID-19 restrictions would not be lifted until at least 80% of its population was vaccinated, RIA news agency reported. Nationwide, only about a third of the population has been inoculated.

Putin has ordered a series of measures including increased testing, tighter monitoring of mask-wearing and social distancing and an acceleration of the vaccine campaign, with employees to get two paid days leave as a reward for getting inoculated.