The Biden administration is standing by its assertion that Israel did not give it a heads-up before its controversial decision last week to blacklist half a dozen Palestinian human rights organizations.

“It is to the best of our knowledge accurate that we did not receive a specific heads-up about any forthcoming designations,” said US State Department spokesman Ned Price, who was asked at a press briefing Monday to respond to the Israeli claim that it had in fact notified administration officials ahead of time of the decision to classify six Palestinian rights groups as terror organizations.

However, he said the US “looked forward to hearing more details” from an Israeli delegation expected in Washington later in the week.

Price on Friday said the US would be “be engaging our Israeli partners for more information regarding the basis for these designations,” which Jerusalem says are warranted, alleging the groups effectively operated as an arm for the Popular Front for the Liberation of Palestine terror group.

“We believe respect for human rights, fundamental freedoms and a strong civil society are critically important to responsible and responsive governance,” Price added, in what appeared to be a tacit rebuke of Defense Minister Benny Gantz’s decision.

But it was the spokesman’s assertion on Friday that “the Israeli government did not give us advance warning” that set off a firestorm in Jerusalem.

On Sunday, in a briefing to reporters, a senior Israeli official said that a Foreign Ministry official traveled to Washington and notified the US State Department’s Bureau of Counterterrorism of the impending decision and handed it relevant intelligence ahead of Gantz’s announcement. 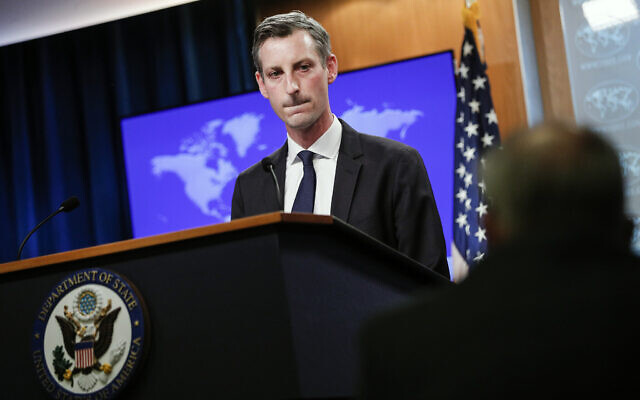 However, the official, speaking on condition of anonymity, claimed that the information likely wasn’t passed on to the Bureau of Near Eastern Affairs, which deals with the Israeli-Palestinian conflict, due to an “internal mishap” within the State Department. This led Price to say that there was no advance notice of the move, the official surmised.

The intelligence connecting the organizations — including prominent ones with significant backing and oversight from the European Union and other international bodies — to the PFLP was “ironclad,” the official insisted. He said the material included “unequivocal evidence that includes video footage, photos, payment receipts that tie the said groups to the backing of terror activity.”

However, another Israeli official confirmed to The Times of Israel on Monday that Foreign Minister Yair Lapid, as well as Prime Minister Naftali Bennett and other members of the cabinet, were not notified of Gantz’s decision ahead of time either, casting doubt as to how an official in Lapid’s office could have been dispatched to Washington last week without his knowledge.

Moreover, Israeli authorities have yet to publicize any evidence tying the six groups (Union of Palestinian Women’s Committees, ADDAMEER — Prisoner Support and Human Rights Association, Bisan Center for Research and Development, al-Haq Organization, Defense for Children International — Palestine (DCI-P), and the Union Of Agricultural Work Committees) to the PFLP.

Some critics of the designation have likened it to Israel’s 2016 arrest of Muhammad Halabi, who headed the Gaza office of the global Christian aid organization World Vision. Halabi was accused of joining Hamas’s ranks and siphoning off millions of dollars from World Vision’s budget for humanitarian projects and funneling them to the enclave-ruling terror group.

But five years after the dramatic accusations were made, the case has continued to drag on, with over 160 court sessions and minimal concrete evidence provided by Israeli authorities to back their claims against Halabi, who has remained in jail since his arrest. 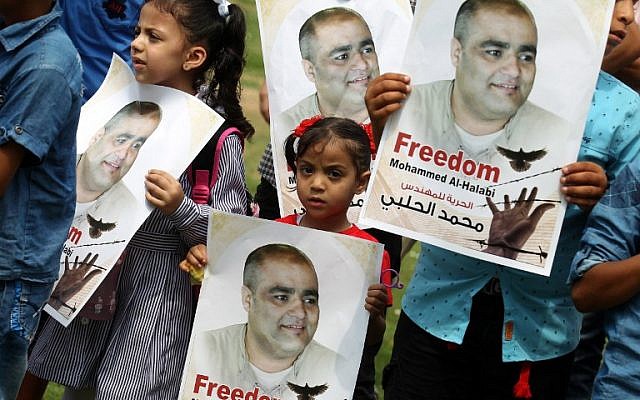 Palestinian children hold posters of Mohammed el-Halabi, left, the Gaza director of World Vision, a major US-based Christian NGO, during a protest to support him at Rafah town in the southern Gaza Strip August 29, 2016. (AFP/SAID KHATIB)

The senior Israeli official said Sunday that another Israeli delegation, this time including an envoy from the Shin Bet security service and the Foreign Ministry, would be sent to the US this week armed with “unequivocal” information proving that the six Palestinian human rights groups had terror ties.

Gantz’s blacklisting of the Palestinian groups sparked a swift backlash around the globe, with the EU, the Palestinian Authority, progressive Democrats, US Jewish groups, and international and Israeli human rights organizations expressing criticism.

Both Israeli military and civilian law ban supporting or joining a terror group, and violators can face years in prison. Israeli authorities can also seize assets belonging to terror organizations and prohibit funding their activities. Donors may also be subject to significant jail time.

Israeli authorities have charged before that the PFLP has pilfered millions of euros from civil society organizations affiliated with its members to fund terrorist activities.

Sorgente articolo:
US insists it wasn’t given heads-up before Israel blacklisted Palestinian groups – The Times of Israel