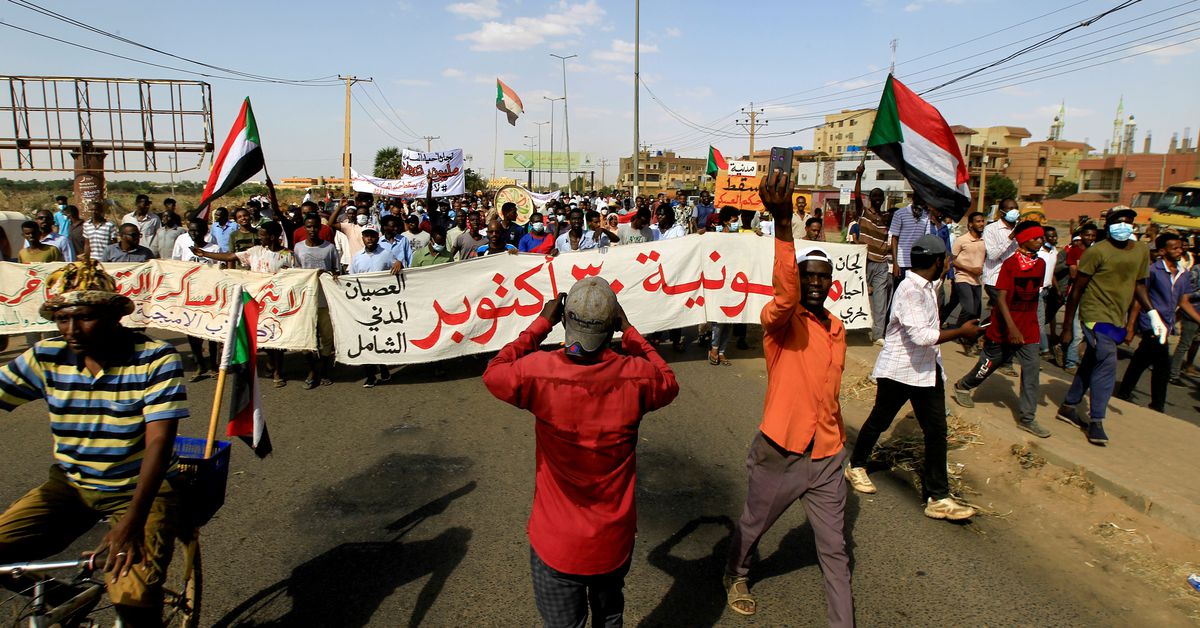 Protesters carry a banner and national flags as they march against the Sudanese military’s recent seizure of power and ousting of the civilian government, in the streets of the capital Khartoum, Sudan October 30, 2021. REUTERS/Mohamed Nureldin/File Photo

KHARTOUM, Nov 17 (Reuters) – Security forces shot dead at least 15 people and wounded dozens as thousands of Sudanese took to the streets on Wednesday on the deadliest day in a month of demonstrations against military rule, medics said.

The protesters, marching against an Oct. 25 coup across the capital Khartoum and in the cities of Bahri and Omdurman, demanded a full handover to civilian authorities and for the leaders of the Oct. 25 coup to be put on trial.

Security forces fired live rounds and tear gas to prevent gatherings in all three cities, and mobile phone communications were cut, witnesses said. State television said there were injuries among protesters and police.

“The coup forces used live bullets heavily in different areas of the capital and there are tens of gunshot injuries, some of them in serious condition,” said the Central Committee of Sudanese Doctors, a group aligned with the protest movement. Deaths were concentrated in Bahri, they said.

Earlier, on a main road in Khartoum, protesters burned tyres and chanted: “The people are stronger, and retreat is impossible.”

Others carried pictures of people killed in previous protests and of Abdalla Hamdok, the civilian prime minister who was put under house arrest during the coup, with the slogan: “Legitimacy comes from the street, not from the cannons.”

Images of protests in towns including Port Sudan, Kassala, Dongola, Wad Madani and Geneina were posted on social media.

Security forces were heavily deployed on main roads and intersections, and bridges across the River Nile were closed, witnesses said.

There was no immediate comment from the security forces and a police representative could not be reached for comment. Military leader General Abdel Fattah al-Burhan has said peaceful protests are allowed and the military does not kill protesters.

The coup ended a transitional partnership between the military and a civilian coalition that helped topple autocrat Omar al-Bashir in 2019. read more

Despite pressure from Western states, which have suspended economic assistance, efforts at mediation have stalled, with Burhan moving to cement control with help from Bashir-era veterans. read more

Speaking in Kenya, U.S. Secretary of State Antony Blinken said “We back (the Sudanese people’s) call to restore Sudan’s democratic transition,” saying the country had been on a path towards stability and that he was “engaged intensely” in the matter.

Protesters and a Reuters witness said they saw security forces chase protesters into neighbourhoods and homes to carry out arrests.

“We haven’t ever had violence in Bahri like today’s, even under the old regime,” said one demonstrator, who said the air was thick with tear gas and security forces used live bullets into Wednesday night.

“The coup forces are practising excessive repression and are encircling the revolutionaries’ marches in several areas,” said the Sudanese Professionals Association, which has helped promote the protests.

“This was preceded by the deliberate interruption of voice and internet communications services.”

Mobile internet services in Sudan have been suspended since Oct. 25, complicating a campaign of anti-military rallies, strikes and civil disobedience.

The doctors’ committee and other unions said in a statement that security forces had tried to raid one hospital in Omdurman and were surrounding another, releasing tear gas and blocking patients’ access. The same was witnessed at hospitals in Bahri, said a demonstrator.

Wednesday’s deaths brought the committee’s death toll since the coup to 39 people.

“Military commanders will be held accountable for these abuses,” said the U.N. special rapporteur on Freedom of Association and Peaceful, Assembly Clement Voule, in a tweet.