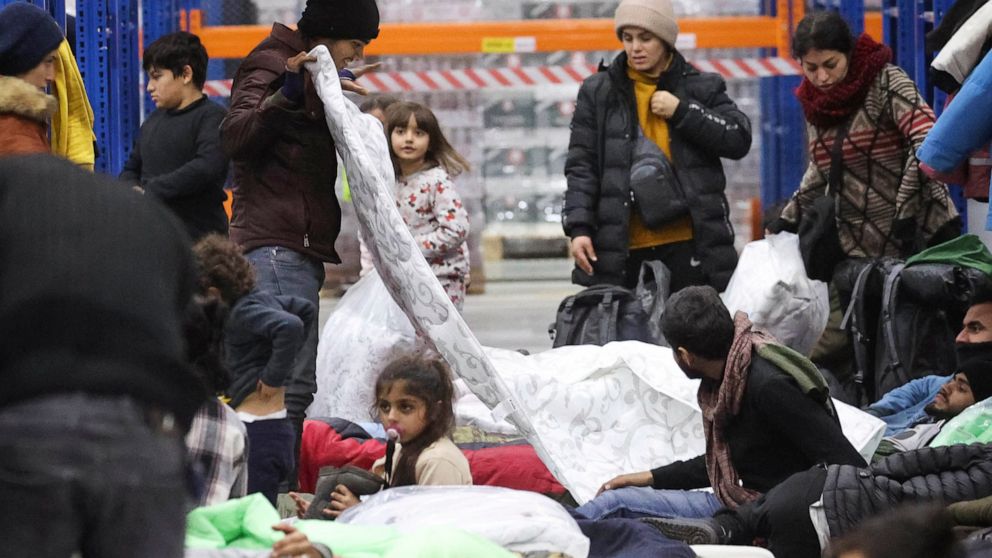 WARSAW, Poland — Hundreds of migrants who were camped in the cold on the Poland-Belarus border have been moved to a nearby warehouse in Belarusian territory, reports said Wednesday, with some reported to still harbor hopes of entering the European Union.

The move came a day after a melee broke out in the border crisis, with migrants throwing stones at Polish forces massed on their side of the razor-wire fence, injuring 12, and they responded with water cannons and tear gas. Warsaw accused Belarusian forces of instigating the conflict, while the government in Minsk denounced Poland’s “violent actions.”

The migrants, mostly from the Middle East, have been stuck at the border since Nov. 8. Most are fleeing conflict or despair at home and want to reach Germany or other western European countries.

The West has accused Belarus President Alexander Lukashenko of using the migrants as pawns to destabilize the 27-nation bloc in retaliation for its sanctions on his authoritarian regime. Belarus denies orchestrating the crisis, which has seen migrants trying to cross the borders into Poland, Lithuania and Latvia since summer.

On Wednesday, Poland’s Border Guard tweeted a video showing migrants with bags and backpacks being directed by Belarus forces away from the camp near the Kuznica border crossing, and Polish Deputy Interior Minister Maciej Wasik said he had received information that they were leaving on buses.

The Belarusian state news agency Belta reported that migrants were moved to a heated logistics center about 500 meters (yards) from the border near Bruzgi, giving them the chance to rest indoors after many days in tents.

One of them, an Iraqi Kurd named Miran Ali, took video inside the warehouse and said Belarusian authorities said they wouldn’t be forced to return home, causing the migrants to chant in gratitude, “Belarus! Belarus! Belarus!”

“This is the joy and happiness of Kurdish people after they were told that they will not be sent back to Kurdistan by force, and that they can wait here until Germany or one of the cities in Germany take them there,” Ali said as he took video of the chants. “These people are expressing happiness and optimism in this cold and ugly camp.”

They sat on blankets, most still wrapped in heavy jackets and raincoats.

Belta reported about 1,000 migrants agreed Tuesday to move into the heated building, near Bruzgi, to “wait for the situation to resolve,” and it quoted some of them as saying that they are not planning to go back to their home countries. Most of the building’s space has been allocated for the migrants, who are offered food, water, medical aid, mattresses and pillows, the news agency said.

Some migrants opted to stay outside near the border. Poland’s Defense Ministry posted video showing people and tents there, with some smoke still rising from bonfires.

The next steps in the crisis are unclear. Although arrangements have been made for flights from Minsk to Iraq to repatriate those who want to return, it is not certain how many will want to go.

German Chancellor Angela Merkel spoke with Lukashenko, whose legitimacy is questioned by the West following a disputed 2020 reelection, and she stressed that migrants should be given the possibility to return to their home countries with the help of the UNHCR and the International Organization for Migration.

Iraq has been appealing for its citizens to fly home, telling them the way into the EU is closed. The first flight for voluntary repatriation to Iraq is expected to take place Thursday.

Steve Alter, a spokesman for the German Interior Ministry, denied that Berlin was planning to pick up the migrants and take them to Germany. Current developments show that the “road to Belarus is a dead end for most people who want to go to Germany. There are no plans to approve taking people in,” he said.

In order to improve the humanitarian situation, Seibert said,“it makes sense to also talk to those who have the opportunity to change this situation in Minsk, even when it comes to a ruler whose legitimacy, like all other European member states, Germany does not recognize.”

Meanwhile, Polish President Andrzej Duda said there is “no military threat” at the border from the primarily civilian police and border guards that are there to protect the EU from the pressure of “illegal migration.” The presence of the Polish military there is chiefly as a backup, Duda said on a visit to Montenegro.

Duda stressed that Poland will not accept any international decisions on the border standoff that are made without Poland’s participation. Duda was referring to the talks involving Merkel and Lukashenko.

Information on both sides of the border is hard to verify due to government restrictions. A state of emergency in Poland is keeping journalists, human rights workers and others away from the border along a zone that is 3 kilometers (2 miles) deep, and Belarus limits the presence of independent journalists.

Estonia, which also is affected by migrant movement but to a lesser degree, said it would build a temporary razor wire barrier of up to 40 kilometers (25 miles) on its eastern border with Russia as a temporary solution to ensure border security.

This northernmost of the three Baltic states, with a population of 1.3 million, shares a 294-kilometer (183-mile) land border with Russia and a 340-kilometer border with Latvia but shares no border with Belarus.