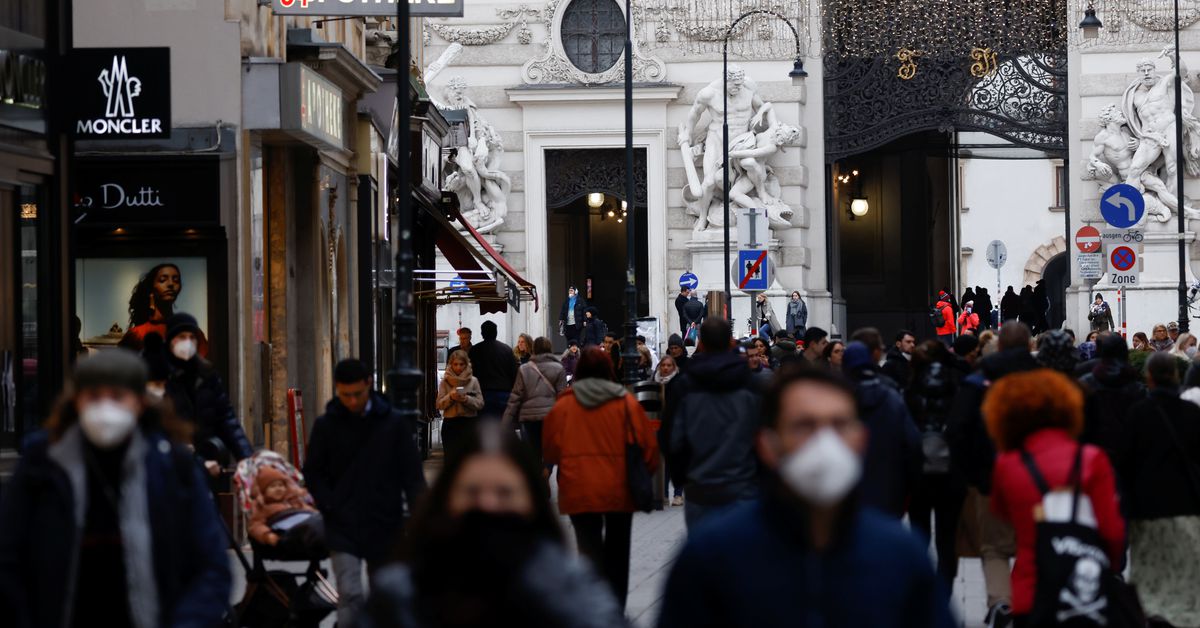 Pedestrians walk along a shopping street after the Austrian government placed roughly two million people who are not fully vaccinated against the coronavirus disease (COVID-19) on lockdown, in Vienna, Austria, November 17, 2021. REUTERS/Leonhard Foeger

VIENNA, Nov 18 (Reuters) – Austria’s daily coronavirus infections hit a new record on Thursday as the hardest-hit provinces started planning a full lockdown and pressure on the government grew to do the same nationally instead of the current lockdown for the unvaccinated.

Roughly 66% of Austria’s population is fully vaccinated, one of the lowest rates in western Europe. Its infections are among the highest on the continent, with a seven-day incidence of 971 per 100,000 people.

With colder weather setting in as winter approaches, cases have surged across Europe, prompting governments to consider reimposing unpopular lockdowns. While the Netherlands has imposed a partial lockdown that applies to all, Austria has sought not to impose extra restrictions on the vaccinated.

Daily infections on Thursday rose above 15,000 for the first time, reaching 15,145. The peak of the biggest wave of infections before this was 9,586 about a year ago, when the country went into full lockdown.

The hardest-hit of Austria’s nine provinces are Upper Austria, a stronghold of the far-right and vaccine-criticising Freedom Party, which has the country’s highest infection rate and its lowest vaccination rate, and neighbouring Salzburg.

The conservative governor of Upper Austria, Thomas Stelzer, said on Thursday that if Austria did not lock down nationally, his province would, Austrian media reported.

“If no national lockdown is ordered tomorrow, there will definitely be a lockdown of several weeks in Upper Austria together with Salzburg. We will coordinate with our neighbouring province (Salzburg) and with the federal government,” newspaper Kurier quoted Stelzer as telling Upper Austria’s parliament.

(This story was corrected to say vaccinated in paragraph 3)