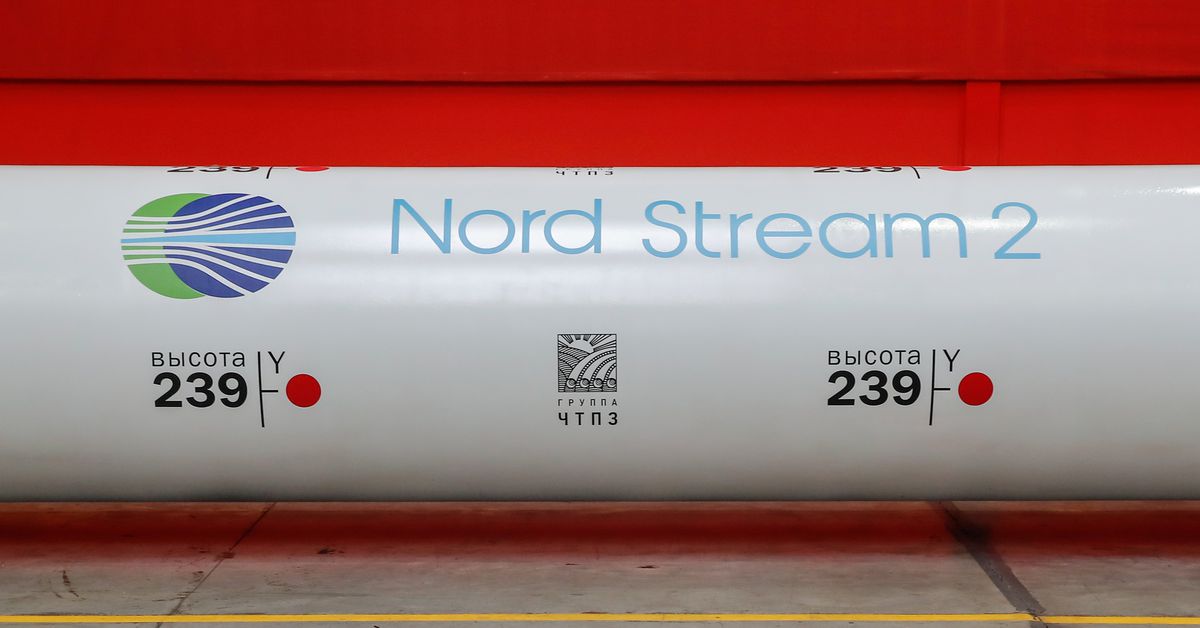 The logo of the Nord Stream 2 gas pipeline project is seen on a large diameter pipe at the Chelyabinsk Pipe Rolling Plant owned by ChelPipe Group in Chelyabinsk, Russia, February 26, 2020. REUTERS/Maxim Shemetov/File Photo

FRANKFURT, Nov 17 (Reuters) – A German regulator’s decision to suspend licensing of the Nord Stream 2 pipeline from Russia to Germany could delay commissioning of the infrastructure until March next year, government sources told Reuters.

Tuesday’s move has sparked gas price surges while policymakers in capitals across Europe and the United States evaluate its implications.

The Swiss-based Nord Stream 2 consortium must form a subsidiary under German law to show it has enough funding and independence from its Russian parent Gazprom (GAZP.MM) before the four-month certification period resumes.

Before Tuesday’s suspension, that period was due to end in January, with the German regulator’s recommendation then going to the European Commission for scrutiny. read more

“I expect that the start of Nord Stream 2 could be delayed until March 2022,” a German government source said on Wednesday.

The source cited the need for Gazprom to create a limited liability company under German law, adding that Gazprom had flagged it would start doing so.

The sources said Germany had insisted Gazprom respect both German and EU laws and warned against illicit gas sales.

Market sources are concerned about Gazprom’s ability to deliver to export markets, which are jittery amid low stocks as winter approaches. read more

“Russia has promised additional gas volumes in case Nord Stream 2 opens,” Hanns Koenig of research firm Aurora said. “But there is free transit capacity via Belarus and Ukraine, so more gas could flow here than is currently the case.”

Koenig said the move in Germany was procedural and made by an energy authority that answers to Berlin but is autonomous in its assessments. He said that in Russia a decision of this magnitude would inevitably be endorsed by heads of government.

“There are very different administrative cultures,” he said.

The regulator intends to supervise the operations of the German Nord Stream 2 company on its territory. It has the possibility to prohibit and fine unlawful behaviour.

Switzerland is not a member of the European Union.