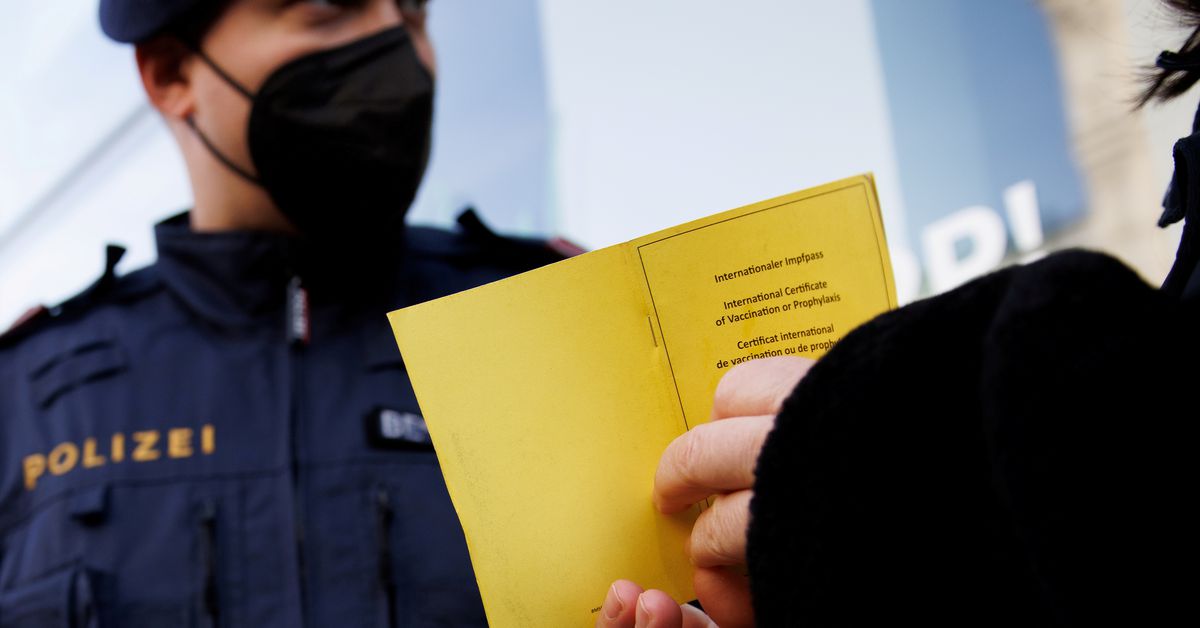 BERLIN/VIENNA, Nov 17 (Reuters) – Germans and Austrians are rushing to get vaccinated against the coronavirus as infections soar across Europe and governments impose restrictions on the unvaccinated, figures showed on Wednesday.

new wave of the pandemic as winter grips the continent.

Britain has had much higher case loads than the rest of western Europe since the summer, but those rates are coming down just as they are rising in central and eastern Europe. read more

The German health ministry said 436,000 people received a shot on Tuesday, including 300,000 boosters, the highest number in about three months. Queues have been forming at vaccination centres around the country.

“It is a sign that many citizens have recognised the need,”

government spokesperson Steffen Seibert said. But he added that the vaccination rate was still not high enough.

About 65% of Austria’s population is fully vaccinated and about 68% of Germany’s, well behind the Netherlands and countries like Italy and Spain that were much harder hit in the early waves of the pandemic.

The Netherlands said it was running short of COVID-19 tests as it registered more than 20,000 new coronavirus cases for the second day in a row, the highest since the pandemic began. read more

Sabine Dittmar, health expert for Germany’s Social Democrats, said she hoped 1.4 million people could be vaccinated a day if shots are administered at companies, by family doctors and by mobile vaccine teams, as well as at vaccination centres.

A police officer checks the vaccination status of a shopper at the entrance of a store after the Austrian government imposed a lockdown on the roughly two million people who are not fully vaccinated against the coronavirus disease (COVID-19) in Vienna, Austria, November 16, 2021. REUTERS/Lisi Niesner/File Photo

In Austria, the number of vaccines administered daily has jumped to about 73,000 in the last week, from around 20,000 in October, official data showed, although the vast majority of those were boosters rather than first shots.

Austria has ordered a lockdown on the roughly two million people who are not fully vaccinated. It has one of the highest infection rates on the continent, with a seven-day incidence of 925 per 100,000 people, compared with 320 in Germany. Its total death toll from the pandemic stands at 11,848

Neighbouring Switzerland, which has not imposed restrictions on the unvaccinated, has had less success with a new vaccination drive – it only persuaded 35,000 to get their first shot in the last week.

Parts of Germany – including the capital Berlin – are demanding proof of vaccination or recent recovery from COVID-19 for all indoor leisure activities, a restriction that could be extended nationally at a meeting of officials on Thursday.

Germany reported 52,826 new infections on Wednesday – a jump of a third compared with a week ago and another daily record, while 294 people died, bringing the total death toll to 98,274.

“It is not too late to opt for a first vaccine shot,” Merkel told a congress of German city mayors. “Everyone who gets vaccinated protects himself and others. And if enough people get vaccinated that is the way out of the pandemic.”

The Czech Republic will ban people who have not been vaccinated from access to public events and services from Monday, Prime Minister Andrej Babis said on Wednesday, and negative tests will no longer be recognised.

The restrictions, to be approved by cabinet on Thursday, come after a spike in new infections to a record 22,479 on Tuesday.

Slovakia reported a record number of cases on Wednesday, and Hungary and Poland had the highest numbers in more than six months. Sweden plans to introduce COVID-19 vaccine passes at indoor events where more than 100 people attend. read more

Additional reporting by Michael Shields in Vienna and Toby Sterling in Amsterdam; Writing by Emma Thomasson; Editing by Riham Alkousaa and Nick Macfie