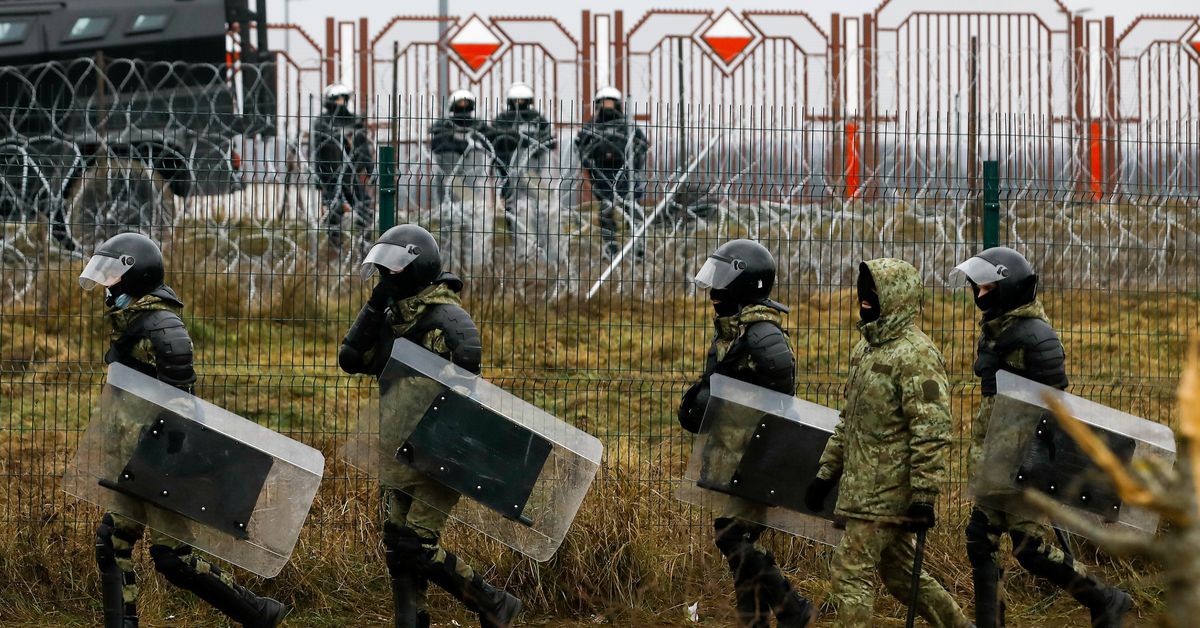 BRUZGI, Belarus, Nov 18 (Reuters) – Belarus said on Thursday it had proposed a plan to solve the migrant crisis at its borders, which would see the European Union take on 2,000 migrants while Minsk would send another 5,000 back home.

It was unclear if the plan could be acceptable to the EU, especially as it came with caveats and was announced just shortly after the European Commission said there could be no negotiation with Belarus over the plight of the migrants.

But in a potential first concrete sign of an easing of the crisis, hundreds of Iraqis checked in at a Minsk airport for a flight back to Iraq earlier on Thursday, the first such flight in months. read more

European countries accuse Belarus of flying in thousands of migrants from the Middle East and pushing them to attempt to cross the frontier illegally. Belarus denies fomenting the crisis.

Thousands of migrants have been trapped in freezing woods at the border. In a cruel sign of the harsh conditions there, a couple, both injured, told the Polish Centre for International Aid, an NGO, on Thursday that their one-year-old child had died in the forest. Previously it had been estimated that at least eight people had died at the border in recent months.

An African migrant whose identity was unknown was buried on Thursday at a Muslim cemetery in Bohoniki, in north-east Poland, near Belarus, the second migrant funeral there this week. read more

“It is hard,” said Maciej Szczesnowicz, a leader of the local Tatar Muslim community. “It pains me that people went to another country… and met such a fate here in Poland.”

A Reuters reporter on the Belarusian side of the frontier saw a group of 200-300 people, mainly men but also families with young children, wrapped in blankets and huddled around makeshift fires, trying to keep warm near the Kuznica-Bruzgi border point.

Some had set up a few tents, and a man could be seen feeding a baby. They were surrounded by Belarusian soldiers wearing masks, helmets and vests, and a water cannon could be seen on the Polish side of the border.

Belarusian President Alexander Lukashenko discussed his proposal with German Chancellor Angela Merkel in a phone call on Wednesday, their second call this week, Lukashenko’s spokeswoman was quoted as saying by Belta news agency. Merkel had agreed to discuss it with the EU, the spokeswoman, Natalia Eismont, said.

“The European Union creates a humanitarian corridor for the 2,000 refugees who are in the camp. We undertake to facilitate (as far as possible and if they wish) the remaining 5,000 to return to their homeland.”

There was no immediate reaction from EU countries, but the bloc’s executive Commission said earlier in the day that there could be no negotiation with Belarus, describing Merkel’s phone calls with Lukashenko as just “bilateral contacts”.

Eismont said migrants would only go back to their country if they want to: “The only condition is their willingness. We won’t force anyone back to Iraq, Syria or other countries.”

Large numbers of Iraqis are among those who have camped at Belarus’s borders, seeking entry and a better life in the prosperous 27-nation EU. Some 430, mostly Iraqi Kurds, checked in for a flight back to Iraq from Minsk on Thursday, the Iraqi foreign ministry said. read more

There had been no other such flights since about 1,000 Iraqis were evacuated from Minsk in August, a spokesperson for Iraqi Airways, Hussein Jalil, told Reuters.

“I would not go back (to Iraq) if it wasn’t for my wife,” a 30-year-old Iraqi Kurd, who declined to give his name, told Reuters on the eve of the evacuation flight. “She does not want to go back with me to the border, because she saw too many horrors over there.” The couple attempted to cross at least eight times from Belarus to Lithuania and Poland.

TRYING TO CROSS THE BORDER

While some migrants returned to Iraq, others made fresh attempts to cross the heavily-guarded border.

Poland said the number of attempts to cross its border from Belarus had risen on Wednesday, with 501 individual attempts, including around 200 by people detained after breaking through when a big group of around 500 made a push across.

In another incident, a few dozen people threw stones, injuring three soldiers and a police officer.

Belarus said earlier this week it was moving some of the migrants away from the border. Belarus TV showed footage of hundreds of migrants, including families, many sitting on mattresses, who had been moved to a large warehouse.

Foreign ministers from the G7 group of wealthy economies said Belarus was orchestrating the crisis.

“These callous acts are putting people’s lives at risk,” said the statement, issued on Thursday by G7 chair Britain. “We call on the regime to cease immediately its aggressive and exploitative campaign in order to prevent further deaths and suffering.”