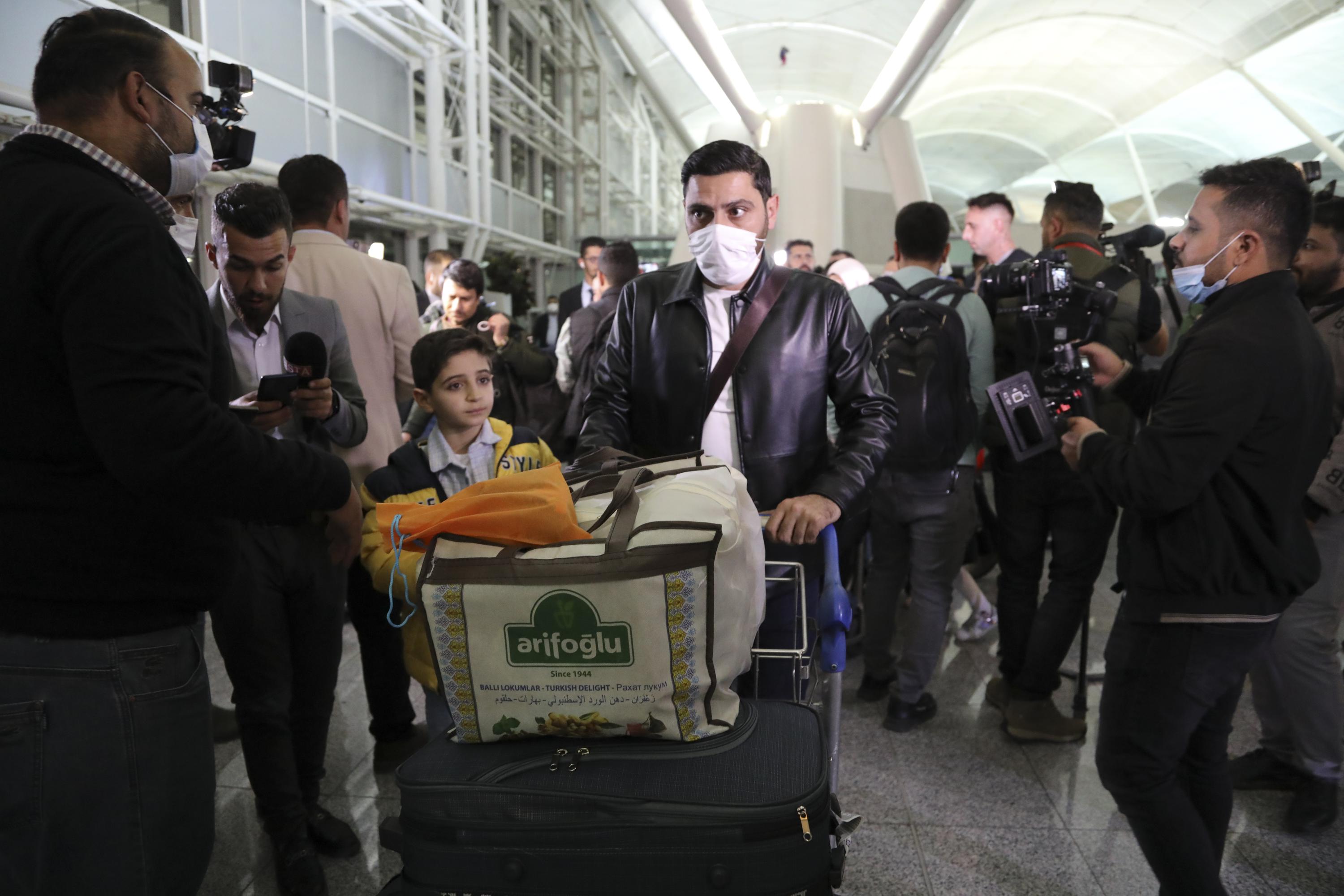 BAGHDAD (AP) — Hundreds of Iraqis returned home Thursday from Belarus after abandoning their hopes of reaching the European Union — a repatriation that came after tensions at Poland’s eastern border, where thousands of migrants became stuck in a cold and soggy forest.

Many others still in Belarus have moved into a heated warehouse not far from the border, emptying out a makeshift camp, Belarusian state-run media reported. But the Polish Defense Ministry posted video showing a few hundred people and their tents still near an official crossing point.

It was not clear if the two countries were talking about two different sites on their border, but it was typical of the dueling narratives that have marked the crisis, in which both Belarus and Poland have sought to portray themselves in a positive light while depicting the other as unfeeling and irresponsible toward the migrants.

Most of the Iraqis who arrived at Irbil’s airport on the flight from Minsk are from the country’s northern Kurdistan region. One woman carried a bassinet with a baby clutching a bottle. Most still wore the heavy winter clothes from their time in Belarus despite the warm weather in Iraq. One fell to the ground after entering the airport, apparently fainting.

The flight continued on to the Iraqi capital of Baghdad, where other returnees got off.

Tensions had flared at the Poland-Belarus border in recent days, with about 2,000 people trapped between the forces from the two countries. On Tuesday, some of the migrants had thrown stones at the Polish troops, who responded with tear gas and water cannons.

The U.N. refugee agency says about half the migrants at the border area were women and children.

At least 12 people have died in the area in recent weeks from the harsh conditions in the border zone, including a 1-year-old whose death was reported Thursday by a Polish humanitarian organization.

Muslims in Poland buried an unidentified migrant at a cemetery in Bohoniki, where a population of Tatars has lived for centuries. It was the second such funeral there for a migrant in a week.

Most of the migrants are fleeing conflict or hopelessness in the Middle East and aim to reach Germany or other western European countries. But Poland has taken a hard line about letting them n, and Belarus didn’t want them returning to the capital of Minsk or otherwise settling in the country.

The West has accused Belarus President Alexander Lukashenko of using the migrants as pawns to destabilize the 27-nation bloc in retaliation for its sanctions on his authoritarian regime. Belarus denies engineering the crisis, which has seen migrants entering the country since summer and then trying to cross into Poland, Lithuania and Latvia.

Amid the standoff at the border, 430 Iraqis registered for flights home, according to Iraq’s consul in Russia, Majid al-Kilani. Thursday’s flight carried 374 of them, said Natalya Eismont, a spokeswoman for Lukashenko. The flight — one of several the Iraqi government said it would organize for voluntary returnees — was scheduled to continue on to the Iraqi capital of Baghdad after Irbil.

Perhaps as many as 7,000 migrants remain in Belarus, according to authorities there. Many have moved to the temporary shelter of the warehouse since Tuesday, where they were given mattresses, water, hot meals and medical assistance.

Iraqi Kurdish migrants said the warehouse had filled up fast, with not enough food or places to sleep. A video acquired by The Associated Press showed men, women and children there, some sleeping on blankets or in sleeping bags on the floor.

“At first, the situation was good, I mean on the first day. We were receiving three meals a day. But as more people came in from the forest, it has got more and more crowded. As a result, we got no dinner yesterday and no lunch today,” one young Iraqi Kurdish man said.

“As you can see, it is getting very crowded here, and it is not easy to find a place to sit or to sleep,” he added, speaking on condition of anonymity because he feared reprisals. “But it is much better than staying in the forest.”

The man said that everyone in the warehouse “has spent a lot of money to come here and they don’t want to go back.”

Amid the border tensions between Warsaw and Minsk, the war of words has drawn in the EU and Belarus ally Russia as well.

EU Union Commissioner for Home Affairs Ylva Johansson accused Belarus of engaging in “an act of state-sponsored migrant smuggling” and said sanctions and stopping flights to Minsk that carry migrants were “our most effective tools in this struggle.”

Foreign ministers of the G-7 group of leading industrialized countries also condemned “the Belarus regime’s orchestration of irregular migration across its borders” in a statement Thursday.

Eismont said the fact that hundreds were leaving Belarus shows that the government is keeping its part of the bargain. The rest are “categorically refusing to fly, but we will work on it,” she said.

Earlier this week, according to Eismont, Lukashenko proposed to German Chancellor Angela Merkel that the EU could open a “humanitarian corridor” to allow 2,000 migrants to head to Germany, while Belarusian authorities try to get the other 5,000 to return to their home countries.

German Interior Minister Horst Seehofer said in Warsaw that suggestions that Germany would be ready to receive some 2,000 migrants is “false information.”

Following a call between Merkel and Lukashenko on Tuesday, her office stressed the need for humanitarian assistance and for the migrants’ safe return home.

Poland’s tough stand against their illegal entry included reinforcing the border with riot police and troops and plans to build a steel barrier. That approach has largely been met with approval from other EU nations, who want to stop a surge of migration.

But Poland also has been criticized by human rights groups and others for pushing migrants back into Belarus and not allowing them to apply for asylum.

Lukashenko has rejected accusations of engineering the crisis and said his government has deported about 5,000 illegal migrants from Belarus this fall.

In May, however, he had railed against the EU sanctions imposed on his country for its harsh crackdown on internal dissent and said it would no longer stop migrants, telling the bloc: “Now you will catch them and eat them yourself.”

“Western countries are using the migration crisis on the Belarusian-Polish border as a new reason for tension in the region that is close to us, for pressure on Minsk, and at the same time they forget their own obligations in the humanitarian sphere,” he said.