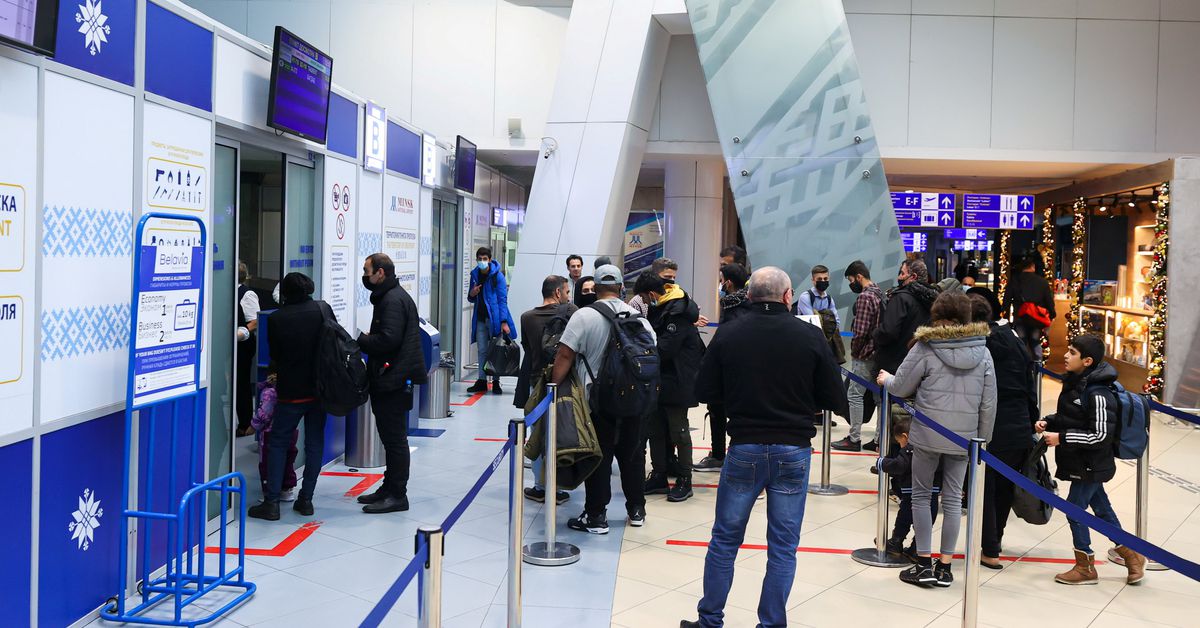 BAGHDAD, Nov 18 (Reuters) – Hundreds of Iraqis who have camped for weeks at Belarus’ borders with the EU checked in for a flight back to Iraq on Thursday, the Iraqi foreign ministry said.

Some 430 migrants, mostly Iraqi Kurds, were to board a flight in Minsk bound for Erbil in Iraq’s autonomous northern Kurdistan region, and then on to Baghdad.

Iraqis, especially Kurds, make up a significant number of the estimated 4,000 migrants now waiting in freezing Belarusian forests and trying to cross into Lithuania, Latvia and Poland.

For months, EU countries have accused Belarus President Alexander Lukashenko of orchestrating the migrant crisis to avenge sanctions imposed after he won a disputed 2020 election and authorities cracked down on mass protests against him.

They said Belarus had made it easier for people from the Middle East to fly to Minsk and try to get into the bloc – an accusation he denies.

Now, hundreds of would-be migrants are returning home having failed to cross the heavily guarded frontier. Some described the harsh conditions of living in the forest in winter, often with young children, and of beatings by border guards.

A 30-year-old Iraqi Kurd, who declined to give his name, decided to register for the evacuation flight with his wife after they attempted to cross at least eight time from Belarus to Lithuania and Poland.

“I would not go back (to Iraq) if it wasn’t for my wife,” he told Reuters a day ahead of the evacuation flight. “She does not want to go back with me to the border, because she saw too many horrors over there.”

Brussels will hope that a combination of pressure on airlines to stop flying migrants to Minsk and migrants giving up attempts to enter the bloc will eventually see the crisis ease.

Several airlines have already agreed to halt flights into the Belarusian capital for most passengers from countries including Iraq and Syria.

At least eight people have died at the border in recent months, including a 19-year-old Syrian man who drowned in a river trying to cross to the EU.

Sorgente articolo:
Iraqis check in for flight home after failing to enter EU from Belarus – Reuters