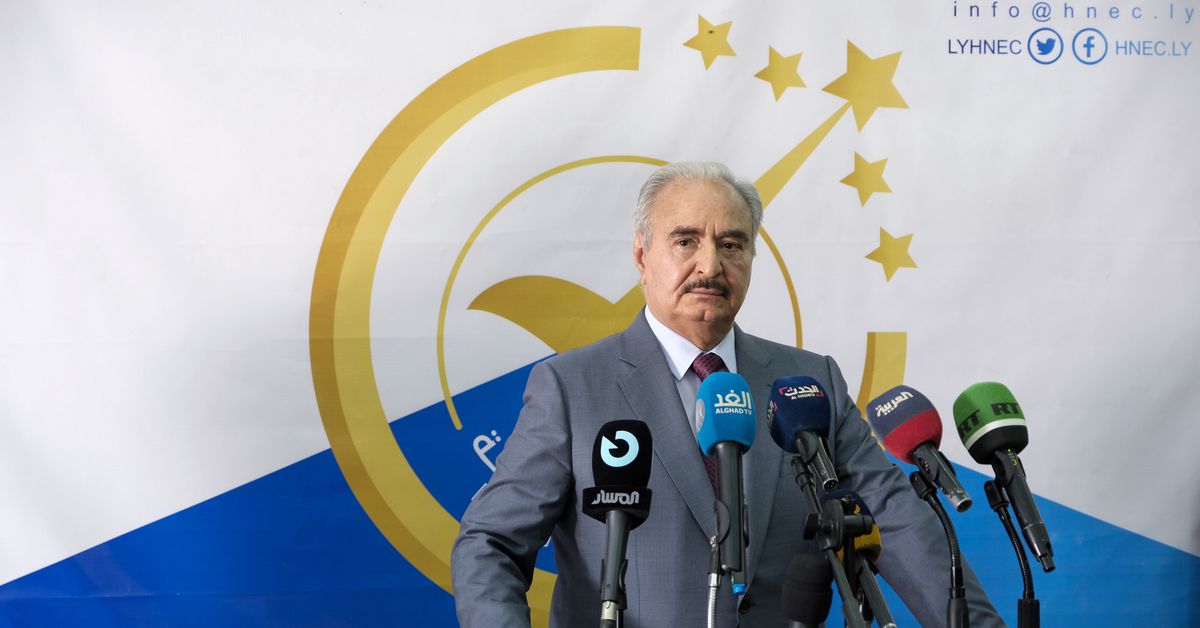 BENGHAZI, Libya, Nov 16 (Reuters) – Khalifa Haftar, a major figure in the Libyan civil war who wields wide sway over the east of the country, announced on Tuesday he will run in a Dec. 24 presidential election that aims to help end a decade of conflict.

A divisive figure, his candidacy is one of many points of contention overshadowing the presidential and parliamentary votes which remain in doubt with just weeks to go, despite international pressure for them to happen on time. read more

Declaring his candidacy in a televised speech, Haftar said elections were the only way out of the crisis in Libya, which has suffered chaos and conflict since the NATO-backed uprising that ousted dictator Muammar Gaddafi in 2011.

Haftar, head of a force called the Libyan National Army, waged war on factions in the west after the country split in 2014, including a 14-month offensive to capture Tripoli which was repelled by the internationally recognised government.

Haftar, who formally registered for the vote at an election commission centre in Benghazi, pledged “to begin the path of reconciliation, peace and construction” in the event of his victory.

His decision to run will anger many in Tripoli and western regions who say no vote in areas he holds can be fair and who accuse him of war crimes during the assault, something he denies.

The election is meant as a milestone in the U.N.-backed political process to knit Libya back together.

However, with no clear agreement on the legal basis for the election, major factions may reject the vote. On Monday, interim Prime Minister Abdulhamid al-Dbeibah, who may also be a candidate for president, called for a new election law.

In September, Haftar paved the way for his presidential bid by saying he would step down from his military role for three months – as required by an election law that has been rejected by armed factions based in Tripoli.

Haftar’s campaign to take Tripoli was backed by the United Arab Emirates, Egypt and Russia. The internationally recognised government in Tripoli received military support from Turkey.

Gaddafi’s son, Saif al-Islam, registered his candidacy on Sunday to run in the election.

Analysts say they do not expect Gaddafi to prove as strong a candidate as rivals who have been able to build constituencies through their control over financial or military resources during the past decade.

Among the officers who supported Gaddafi when he seized power from King Idris in 1969, Haftar was disowned by Gaddafi after he was captured leading Libyan forces in Chad in 1987.

He settled outside Washington D.C. in Virginia and returned to Libya only as the revolt against Gaddafi was gathering pace.