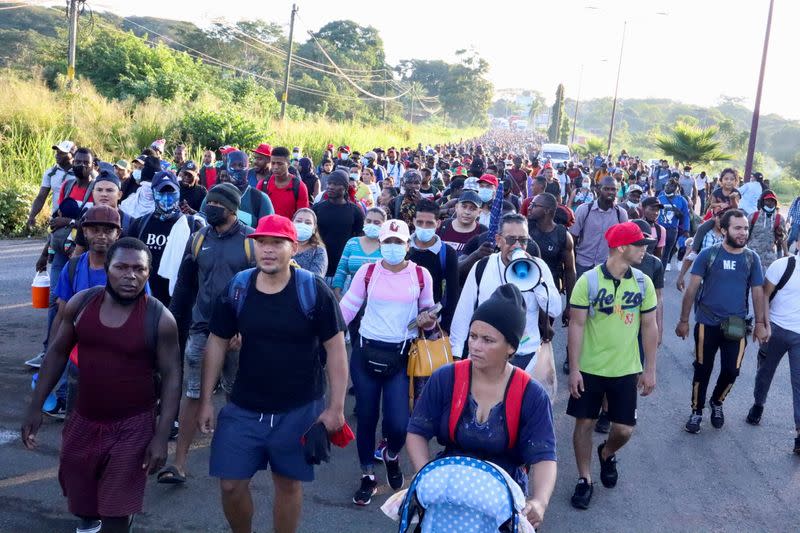 By Jose Torres and Yahir Ceballos

TAPACHULA, Mexico (Reuters) -A new caravan of about 3,000 migrants mostly from Haiti and Central America set off on foot from southern Mexico on Thursday, chanting “freedom!” as they headed north towards the U.S.-Mexico border.

Many of the migrants embarking from the city of Tapachula near Guatemala said they hope to catch up with another caravan of U.S.-bound migrants in the neighboring state of Veracruz.

The new caravan departed on its more that 1,600-km (1,000-mile) trek as leaders of the United States, Mexico and Canada met on Thursday for their first summit in five years, slated to discuss immigration among other key issues.

The United States hit record migration levels at its border with Mexico this year, piling on pressure on U.S. President Joe Biden to curb the flow of people.

A caravan that began with some 3,000 people in Tapachula almost a month ago https://www.reuters.com/world/americas/new-migrant-caravan-mexico-pushes-past-blockade-head-north-2021-10-23 had whittled down to about 700 people on Thursday by the time it reached the municipality of Jesus Carranza in Veracruz, still hundreds of kilometers (miles) from the U.S.-Mexico border.

Although Mexican officials have attempted to bar migrants from taking rides on passing trucks, some have still managed to catch rides on stretches of highway between government checkpoints.

Caravan organizer Irineo Mujica said he hoped the new caravan would join the Veracruz group in the coming days in the cities of Acayucan or Coatzacoalcos.

The Tapachula contingent filled the width of a three-lane highway as families trekked ahead, including small children. Caravan organizers said that the new group included people from at least 12 countries, including India, Peru and Venezuela.

They had reached the city of Huehuetan, 18 km (11 miles) away, by afternoon, and planned to stay there the night before heading to nearby city of Huixtla before dawn on Friday.

Like many Central Americans fleeing gang violence, Ana Gomez, 32, says she left El Salvador with her three children, her sister and her niece, hoping to reach the United States or perhaps stay in Mexico.

“I had to flee my country,” Gomez said. “A month ago, they came to our house and said if I don’t hand over my daughter, they’ll kill her.”

Haitian migrant Adrian, 26, who declined to give his surname, said he was almost out of money and hoped to land work in Mexico City.

“I left to look for a better life,” he said.