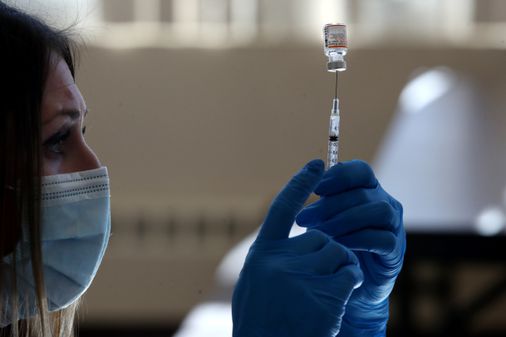 In July, by contrast, when hopes for a return to normalcy were high and the Delta variant had not reared its ugly head, some states reported less than one case per 100,000 per day.

“Governor [Chris] Sununu and [the state’s Department of Health and Human Services] have long been clear in stating that a winter surge is to be expected, especially as all New England states begin to see a rise in cases fueled by the Delta variant,” DHHS spokesman Jake Leon said by e-mail.

“The State of New Hampshire continues to utilize a [public service announcement] campaign to urge individuals to get vaccinated if they have not already done so and to encourage eligible individuals to receive their booster shot. The vaccine remains the most effective tool to prevent the spread of COVID-19 and for individuals to protect themselves, their families, and their communities,” Leon said.

Vermont expanded booster shots to all adults on Wednesday, joining a group of states that have acted in advance of possible federal approval later this week. Vermont Governor Phil Scott said he wanted to get “everyone boosted to help reduce the disruption of higher cases and minimize transmission to at-risk Vermonters, particularly through the winter months.”

Maine Governor Janet Mills, whose state also opened up boosters to all adults on Wednesday, said that “with Maine and other New England states confronting a sustained surge, and with cold weather sending people indoors, we want to simplify the federal government’s complicated eligibility guidelines and make getting a booster shot as straightforward and easy as possible,”

The coronavirus has been moving north and west as colder weather arrives and people gather more indoors. A summer wave of cases in the South has been subsiding.

Nationally, case numbers had been declining since early September but in the past several weeks have been edging up again, on Monday reaching a seven-day average of 25.2 cases per 100,000.

“As people move back indoors and spend time together, unfortunately COVID will be transmitted among households, at workplaces, and in schools,” Pierre said. “It is something that we have been expecting.”

“What we don’t want to see is a corresponding uptick in emergency department and hospital admissions,” Pierre added.

The key to that is vaccinations, which “go a long way in keeping us safe and reducing that winter surge and preventing hospitalizations and deaths,” she said.

She urged people who aren’t vaccinated to get their shots, and for eligible people to receive a booster, particularly if they are 65 and older or medically vulnerable. She encouraged people to promote the merits of vaccination with their friends, relatives, and community members.

She also advised that people wear masks in indoor public spaces and continue to get tested, including using rapid, at-home tests.

While some have suggested COVID-19 will eventually become a disease that people learn to live with, Pierre said that time has not arrived.

“No one that I know is urging complacency for the situation that we have at the moment,” she said. “We’re not there yet. … All the vigilance is still necessary at this point.”

Dr. Paul Sax, clinical director of the Division of Infectious Diseases at Brigham and Women’s Hospital, noted that “only a very small proportion of our children are immunized at this point. Plus, among adults, the vaccine effectiveness clearly starts wearing off over time, which is why I’ve advocated for a third dose for any adult who is six months past their second shot.”

The US Food and Drug Administration could authorize booster doses of the Pfizer vaccine for all adults as early as Thursday, and an expert CDC panel will discuss it the next day, raising the prospect of approval by the weekend, according to media reports.

“We have to get as many people vaccinated as possible, along with many people their third doses, too,” Sax said by e-mail.

Dr. Howard Koh, a former assistant US secretary of health and Massachusetts public health commissioner, said the case increases are the result of a number of factors: “the continued tenacity of the Delta variant; ongoing infections in the unvaccinated, especially in children, younger adults, and in rural and other underserved areas; breakthrough infections related to waning immunity; decreasing mask use; increasing social mobility; and seasonal impacts from colder weather.”

“We are still running a public health marathon. Everyone can do more to promote prevention going forward. We cannot assume that the relatively high vaccination levels in New England are high enough,” he said. “Trends may worsen with holiday travel approaching.”

“We need to monitor hospitalization and death outcomes closely while supporting public health and health care professionals who in turn are supporting us during this uncertain time,” said Koh, now a professor at the Harvard T.H. Chan School of Public Health.

Material from Globe wire services was used in this report.

Sorgente articolo:
With a worrisome winter ahead, COVID-19 cases have risen around New England – The Boston Globe