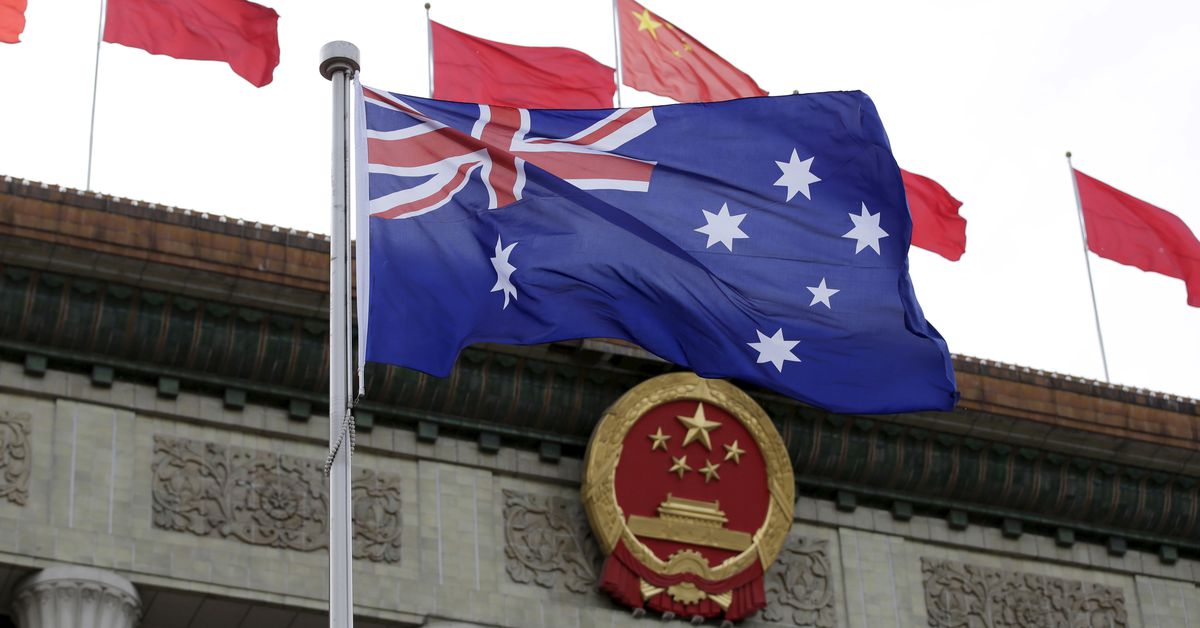 Australian flag flutters in front of the Great Hall of the People during a welcoming ceremony for Australian Prime Minister Malcolm Turnbull (not in picture) in Beijing, China, April 14, 2016. REUTERS/Jason Lee

SYDNEY, Nov 19 (Reuters) – Australia has become a “sabre wielder” rather than a defender of peace because of its plans to build at least eight nuclear-powered submarines with U.S. and British technology, China’s top envoy in the country told The Guardian.

Australia in September entered into the trilateral security partnership, cancelling a submarine deal with France in a move that enraged Paris. It also riled China, the major rising power in the Indo-Pacific region. read more

Wang said people of his age in China saw Australia as a peace-loving country, “but nowadays people know that a nuclear-powered submarine is designed to launch long-range attack against a target far away”.

“So who are you going to attack? You are no longer a peace lover, a peace defender, you become a sabre wielder in certain form,” he said of Australia.

Canberra has defended the trilateral deal, with Prime Minister Scott Morrison saying he did not regret the decision “to put Australia’s national interest first.” read more

Wang in the Guardian interview urged Australian politicians to “refrain from doing anything that is destructive” to the relationship between the two countries.

Australian Defence Minister Peter Dutton said last week it would be “inconceivable” for Australia not to join the United States should Washington take action to defend Taiwan, the democratically governed island claimed by Beijing. read more

The acting ambassador signalled Beijing would not take the initiative to end the freeze on calls between the two countries, saying speculation about engagement in a military conflict was “not a conducive environment” for high-level talks.

Australia’s relationship with China, its largest trading partner, soured after it banned Huawei Technologies Co Ltd from its 5G broadband network in 2018 and called for an independent investigation into the origins of COVID-19. Beijing responded by imposing tariffs on several Australian commodities.