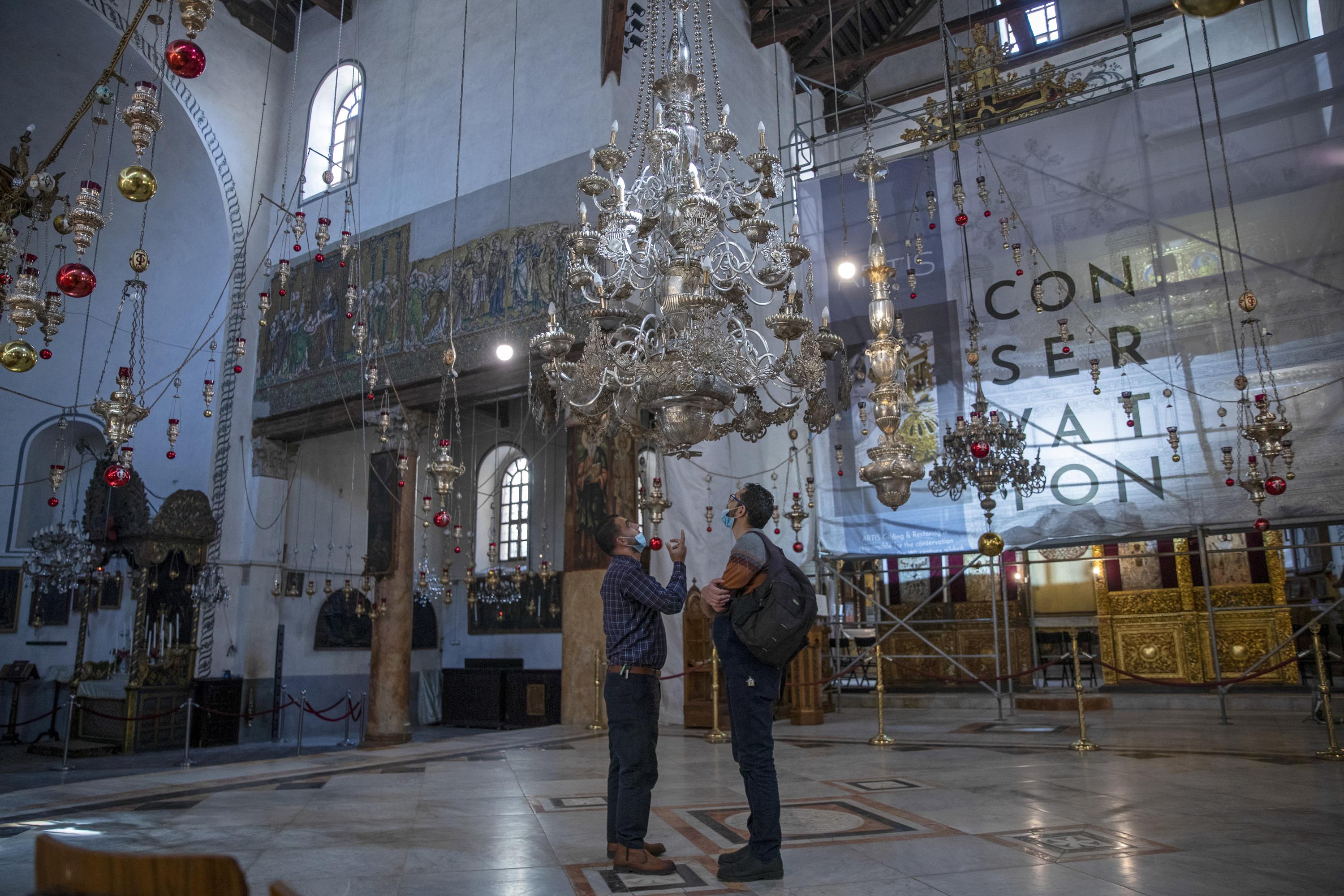 BETHLEHEM, West Bank (AP) — Ahead of Christmas, a towering wooden screen — once blackened with soot from millions of worshippers’ candles — is being restored to its gilded glory in the Church of the Nativity, built at the site where many believe Jesus was born.

But few visitors are expected to see it during the upcoming Christmas holiday season.

Biblical Bethlehem has struggled since the start of the coronavirus pandemic almost two years ago. Christmas is normally peak season for tourism in Jesus’ traditional birthplace, located in the Israeli-occupied West Bank. In pre-pandemic times, thousands of pilgrims and tourists from around the world celebrated in the Church of the Nativity and the adjacent Manger Square.

Israel reopened its borders to vaccinated tourists earlier this month, but relatively few are expected to travel to Bethlehem this holiday season, and not nearly as many as in the record-breaking year preceding the pandemic. Most tourists visiting Bethlehem fly into Israel as the West Bank does not have an airport.

Many of Bethlehem’s hotels have shut and shopkeepers have struggled to keep afloat. Aladdin Subuh, a shopkeeper whose store sits just off Manger Square, said he only opens his doors to air out the shop.

“It’s almost Christmas and there’s nobody. Imagine that,” he said, surveying the few passersby in the hopes of spotting a foreigner in search of a souvenir. “For two years, no business. It’s like dying slowly.”

Though the pandemic has blighted the Holy Land’s once thriving tourism industry for Israelis and Palestinians alike, for tourism-dependent Bethlehem, the impact has been especially severe. Israel, the primary gateway for foreign tourists, had banned most foreign visitors for the past year and half before this month’s reopening.

Just over 30,000 tourists entered Israel in the first half of November, compared to 421,000 in November 2019, according to Israel’s Interior Ministry.

The Palestinian self-rule government, which administers autonomous enclaves in the West Bank, has only provided limited support, in the form of tax exemptions and training programs, to hoteliers, tour operators and tour guides, said Majed Ishaq, director of marketing at the Palestinian Tourism Ministry. He said the ministry was launching a campaign to encourage Palestinian citizens of Israel to visit Bethlehem and other West Bank cities over the holiday season. He added that he hopes the number of foreign tourists would be 10% to 20% of pre-pandemic figures.

Others are not so optimistic.

“I don’t think tourism will come back very soon,” said Fadi Kattan, a Palestinian chef and hotelier in Bethlehem’s Old City. The pandemic forced him to close his Hosh Syrian guesthouse in March 2020, and over the months he had to let his staff go.

He said it was neither financially nor practically feasible to reopen ahead of Christmas, particularly in light of a new wave of coronavirus infections sweeping across Europe. He said it will take years to recover from the pandemic’s “compounded impact over two years” on Bethlehem’s economy — from hotels and restaurants on down to the farmers, grocers and dry cleaners who depended on their businesses.

“To reopen in security we need to see that there’s a long-term prospect,” he said.

On a recent day at the Church of the Nativity, the crown jewel of Bethlehem, a solitary group of Italian tourists entered the 6th-century basilica that in years before COVID-19 would have a line stretching out the door. Municipal workers were starting to string up Christmas lights behind them in Manger Square.

The church has undergone a multi-million dollar facelift since 2013 that was organized by a Palestinian presidential committee. It has restored gold-tiled mosaics and marble floors to their former glory and made major structural repairs to the UNESCO heritage site, one of the oldest churches in Christendom.

Additional work remains to be done, said Mazen Karam, director of the Bethlehem Development Foundation, the group spearheading some of the restorations at the church. The undertaking has already cost $17 million, but Karam said an additional $2 million are needed to refurbish the church’s flagstones and install firefighting and micro-climate systems.

A separate project by the Greek Orthodox Church to refurbish the once soot-encrusted iconostasis — a late 18th-century wooden screen separating the sanctuary from the building’s nave — was delayed by the coronavirus outbreak, but is now nearing completion ahead of Christmas, after three years of painstaking work.

But Father Issa Thaljieh, a Greek Orthodox priest at the Church of the Nativity, remains optimistic ahead of the holiday season.

“Thank God, a little bit day by day we can see more groups coming to Bethlehem — not staying in Bethlehem, only maybe for a visit — but it is a good sign,” he said, standing on the church’s recently refinished marble bema, or raised platform. “Bethlehem without tourists, without people coming to Bethlehem, is nothing.”