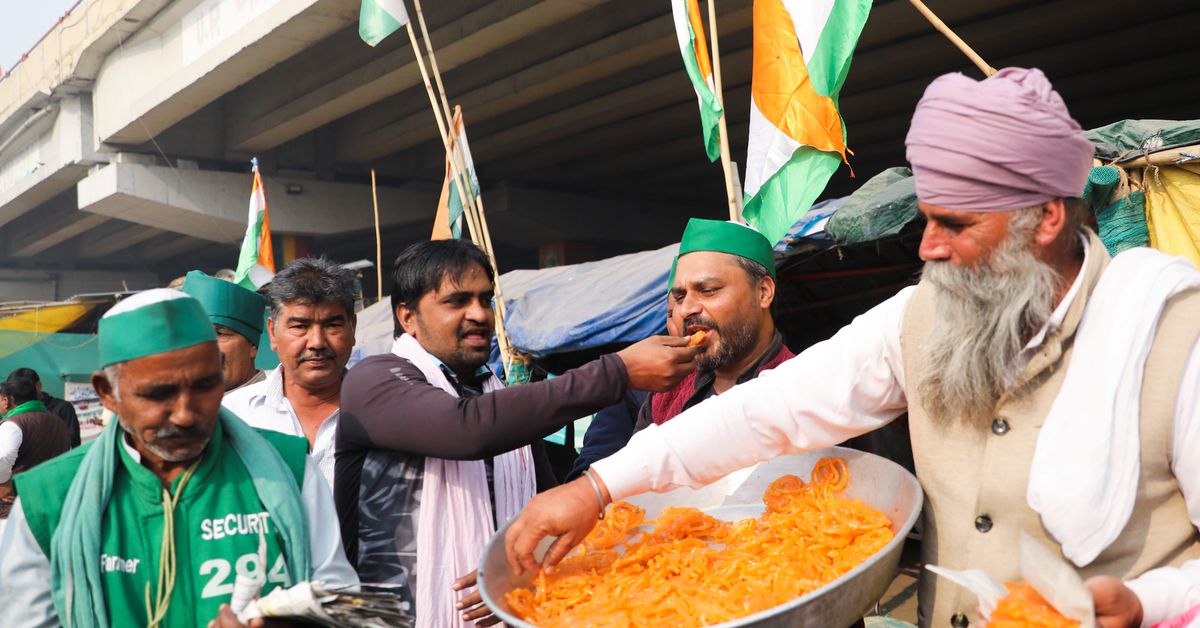 GHAZIABAD, India, Nov 19 (Reuters) – Indian Prime Minister Narendra Modi said on Friday he would repeal three agriculture laws that farmers have been protesting against for more than a year, a significant climb-down for the combative leader as important elections loom.

The legislation, introduced in September last year, was aimed at deregulating the sector, allowing farmers to sell produce to buyers beyond government-regulated wholesale markets, where growers are assured of a minimum price.

Farmers, fearing the reform would cut the prices they get for their crops, staged nationwide protests that drew in activists and celebrities from India and beyond, including climate activist Greta Thunberg and pop singer Rihanna.

“Today I have come to tell you, the whole country, that we have decided to withdraw all three agricultural laws,” Modi said in an address to the nation.

“I urge farmers to return to their homes, their farms and their families, and I also request them to start afresh.”

The government would repeal the laws in the new session of parliament, starting this month, he said.

The surprise concession on laws the government had said were essential to tackle chronic wastage and inefficiencies, comes ahead of elections early next year in Uttar Pradesh (UP), India’s most populous state, and two other northern states with large rural populations.

It could also raise questions for investors about how economic reforms risk being undermined by political pressures.

Protesting farmers, who have been camped out in their thousands by main roads around the capital, New Delhi, celebrated Modi’s back-track.

“Despite a lot of difficulties, we have been here for nearly a year and today our sacrifice finally paid off,” said Ranjit Kumar, a 36-year-old farmer at Ghazipur, a major protest site in Uttar Pradesh.

Rakesh Tikait, a farmers’ group leader, said the protests were not being called off.

“We will wait for parliament to repeal the laws,” he said on Twitter.

Modi’s Bharatiya Janata Party (BJP) government said last year that there was no question of repealing the laws. It attempted to break the impasse by offering to dilute the legislation but protracted negotiations failed.

The protests took a violent turn on Jan. 26, India’s Republic Day, when thousands of farmers overwhelmed police and stormed the historic Red Fort in New Delhi after tearing down barricades and driving tractors through roadblocks.

One protester was killed and scores of farmers and policemen were injured.

Small farmers say the changes make them vulnerable to competition from big business and they could eventually lose price support for staples such as wheat and rice.

The government says reform of the sector, which accounts for about 15% of the $2.7 trillion economy, means new opportunities and better prices for farmers.

Modi announced the scrapping of the laws in a speech marking the birth anniversary of Guru Nanak, the founder of Sikhism. Many of the protesting farmers are Sikh.

Modi acknowledged that the government had failed to win the argument with small farmers.

The farmers are also demanding minimum support prices for all of their crops, not just for rice and wheat.

“We need to know the government’s stand on our other key demand,” Darshan Pal, another farmers’ leader, said of the new demand, which has gained traction among farmers across the country, not just in the northern grain belt.

Rahul Gandhi of the main opposition Congress party, said the “arrogant” government had been forced to concede.

“Whether it was fear of losing UP or finally facing up to conscience BJP govt rolls back farm laws. Just the beginning of many more victories for people’s voices,” Mahua Moitra, a lawmaker from the Trinamool Congress Party and one of Modi’s staunchest critics, said on Twitter.

But some food experts said Modi’s back-track was unfortunate because the reforms would have brought new technology and investment.

“The laws would have helped attract a lot of investment in agricultural and food processing – two sectors that need a lot of money for modernisation.”