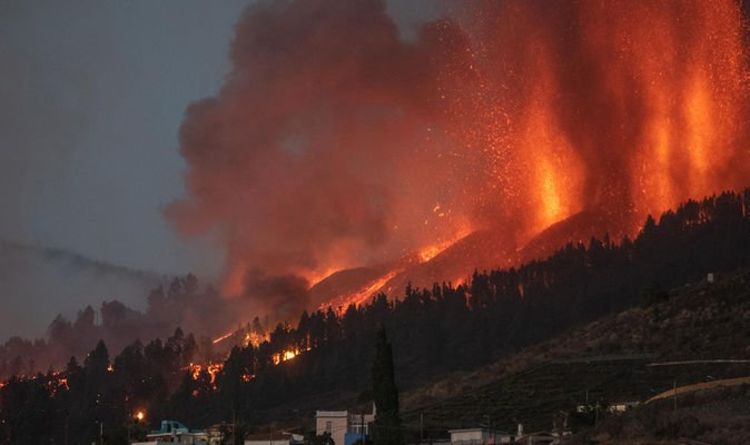 On Wednesday, the volcanic Canary Island was hit by a staggering 2300 earthquakes. The previous two weeks had seen the number of earthquakes each day drop to below the 200 mark. Experts are monitoring the situation carefully to see if it is a one-off spike or if the volcano’s activity is changing.

But it comes as there had been a downward trend in several indicators of the volcano’s activity, including seismicity.

The last time numbers were seen this high was on 14 September, when more than 300 earthquakes were recorded.

At that time, a third of the movements had a magnitude of less than 2, while the rest were between 2 and 3.

This Wednesday, two-thirds of the earthquakes were at magnitudes 2 to 3 and the remaining third at 3 to 4, with one earthquake above 4.

It comes after the volcano claimed its first victim, two month after it first started erupting.

On Saturday, local news outlets reported that a 72-year-old man died at a family home between the towns of El Paso and Los Llanos de Aridan.

While both towns have been evacuated since the volcano began erupting in September, the man, whose name has not been released, was given special permission to be in the area by local authorities as part of a volunteer cleanup crew.

Experts are still determining the exact cause of death, but the man was found inside a family home with a hole in the roof.

It is thought that he may have fell through the roof while cleaning ash off it.

Authorities said that there have been several similar accidents of people falling off roofs while attempting to clean ash.

Miguel Ángel Morcuende, a director at Pevolca, the national emergency committee running the volcano response, told Spanish newspaper El Pais that there’s a chance the man may have suffocated in the ash after his fall.

He said:“Professional cleaning staff are working at all times.

But it is evident that this is not enough and it is clear that many locals want to clean their roofs.”

The volcano has had a huge impact on the residents and geography of the islands over the course of its longest eruption in nearly 350 years.

It is continuing to change the landscape of the island, including creating a new portion of the island off the southwest coast where lava is meeting the sea.

Satellite photos released from the European Space Agency on Sunday show how new lava flows that began in November are making new deltas in the Atlantic Ocean as the molten rock enters the water and cools off.