Top Israeli and Emirati defense firms signed two agreements on Thursday to work together to develop remote-controlled and autonomous vehicles and to maintain and sell advanced cameras for military and commercial purposes, the Israeli company said.

These were the latest defense deals signed between the two countries during this month’s Dubai Air Show, a major weapons exhibition in the Emirati city. Israeli defense firms were able to open a booth there for the first time this year, after Israel and the United Arab Emirates normalized ties last year.

On Thursday, Israel Aerospace Industries and EDGE Group — both of them state-owned — signed the two memoranda of understanding.

One of the agreements focused on the formation of a joint center in the UAE that would maintain and market the Israeli firm’s advanced electro-optic arrays.

Under the second memorandum of understanding, the two companies agreed to work together to design and build unmanned surface vehicles for both military and commercial applications.

These deals came roughly a year after the US-brokered Abraham Accords established full formal ties between Israel and the UAE, followed by Bahrain, Morocco and Sudan, the latter of whom has not yet finished the process and has recently gone through a military coup. 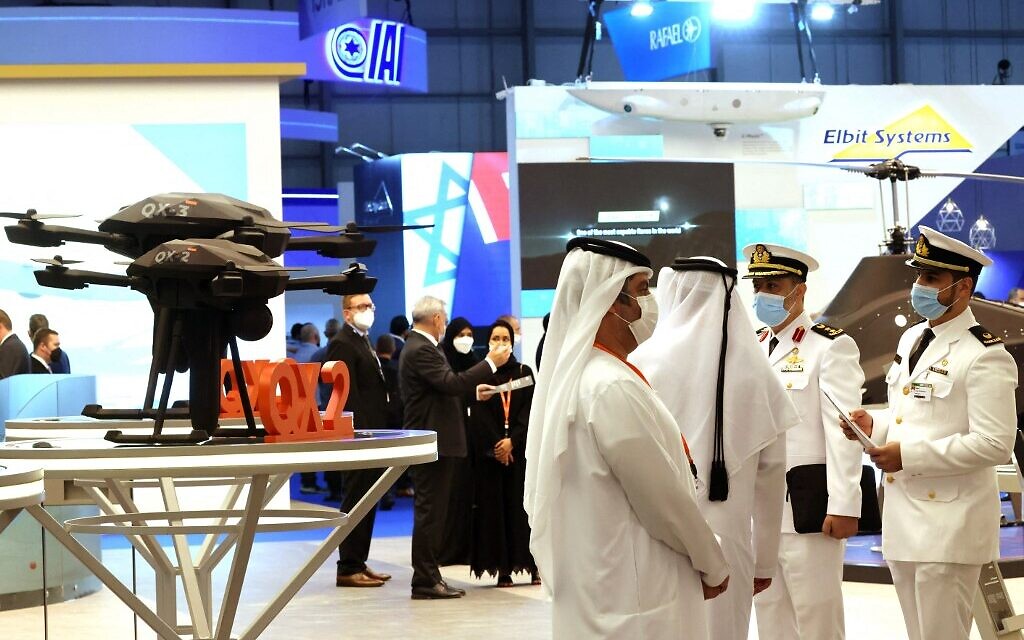 Military equipment is displayed at the Dubai Airshow in the Gulf emirate, on November 14, 2021. (Giuseppe CACACE / AFP)

Seven Israeli firms, including IAI, went to the defense exhibition in Dubai, and additional agreements between the countries’ defense contractors were expected in the near future.

Earlier this week, IAI signed an agreement with Dubai’s Emirates airline to convert four passenger aircraft into cargo planes. Under the agreement, IAI will convert the Boeing B777-300ER passenger planes into cargo carriers at a newly opened facility in Abu Dhabi, with the potential for the Israeli firm to “provide passenger-to-freighter conversion services to more aircraft,” according to the company.

In August, IAI finalized a deal with the UAE’s Etihad Airways Engineering, the largest commercial aircraft maintenance provider in the Middle East, to establish a major facility in Abu Dhabi to convert Boeing 777-3000ER passenger planes into cargo aircraft.

IAI’s Aviation Group and Etihad said at the time that the conversion site will operate as IAI’s maintenance center in the UAE and help meet the global rise in demand for cargo jets of this model. The companies said the facility would be the largest and most advanced in the Middle East to be certified by the UAE Civil Aviation Authority, the US Federal Aviation Administration, and the European Aviation Safety Agency.

Ricky Ben-David contributed to this report.