LONDON, United Kingdom (AFP) — Azeem Rafiq, a former English cricketer who this week said he had lost his career to racism, admitted Thursday he had sent antisemitic messages as a teenager.

The Times newspaper uncovered messages sent to former Warwickshire and Leicestershire player Ateeq Javid, in which Rafiq is seen to make disparaging comments about an unnamed Jewish person.

Rafiq, tweeting about those remarks on Thursday, said: “I have gone back to check my account and it is me — I have absolutely no excuses.

“I am ashamed of this exchange and have now deleted it so as not to cause further offense,” the 30-year-old Pakistan-born cricketer added.

“I was 19 at the time and I hope and believe I am a different person today. I am incredibly angry at myself and I apologize to the Jewish community and everyone who is rightly offended by this.”

Rafiq, a Muslim, was widely praised for giving a disturbing account of the racism he suffered during two spells with Yorkshire to a parliamentary committee on Tuesday, having previously said the abuse had led him to contemplate taking his own life.

The former off-spinner, whose case has led to further revelations at other county clubs, later said he expected the “floodgates” to open in a crisis that threatens to engulf English cricket.

Rafiq, who said he had repeatedly been called a “Paki,” told the committee: “Do I believe I lost my career to racism? Yes, I do.”

He also mentioned a number of former teammates, including ex-England internationals Matthew Hoggard, Tim Bresnan, and Gary Ballance, the latter still at Yorkshire, had used racial slurs towards him.

On Monday, current England spinner Adil Rashid joined ex-Pakistan Test player Rana Naved-ul-Hasan in alleging that former England captain Michael Vaughan had said in front of a group of Yorkshire players of Asian ethnicity in 2009: “Too many of you lot, we need to do something about it.”

Vaughan has “categorically” denied making the comment, but Rafiq said Tuesday: “Michael might not remember it… three of us, Adil, myself, and Rana remember it.” 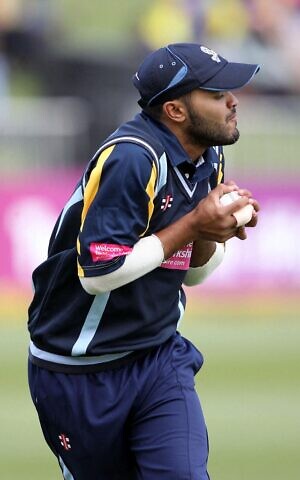 In this file photo taken on October 22, 2012, Azeem Rafiq of Yorkshire takes a catch during a Champions League T20 (CLT20) match against Chennai Super Kings at the Kingsmead stadium in Durban. (AFP)

The fallout for Yorkshire, one of English cricket’s oldest and most prestigious counties, over the scandal has been devastating, with sponsors making a mass exodus and the club suspended from hosting lucrative international matches.

But Rafiq warned Yorkshire, whose chairman and chief executive have both resigned, could not move forward until head coach Andrew Gale and director of cricket Martyn Moxon had left the Headingley-based club.

Gale is himself currently suspended pending investigations over a historical antisemitic tweet, with former England batsman Moxon signed off with a stress-related illness.

Rafiq accused Gale of constant racial abuse and Moxon of systematic bullying, including an outburst on Rafiq’s first day back following the stillbirth of his son.

Earlier on Thursday, the British government warned English cricket’s ruling body it faced the “nuclear option” of independent regulation amid widespread criticism of how it had dealt with Rafiq’s revelations.

England and Wales Cricket Board chief executive Tom Harrison, who also testified to the same committee as Rafiq on Tuesday, insisted his organization was “fit for purpose” as both the promoter and regulator of the game.

But sports minister Nigel Huddleston warned that if the ECB “don’t get their act together, then we have the nuclear option of legislating in order to potentially bring in an independent regulator.”

Huddleston added: “Tom Harrison has promised me that with every fiber of his being he will act. He knows and I know that we will judge them on their deeds, not their words.

Harrison’s role will come under renewed scrutiny during an ECB board meeting on Thursday and a wider “all-game” gathering of its 41 constituent members — including the 18 first-class counties — at the Oval on Friday, where the Rafiq scandal will be discussed.

But were Harrison to be ousted, it would leave a leadership vacuum, after ECB chairman Ian Watmore resigned last month following the fall-out from the controversial decision to call off an England tour of Pakistan scheduled for October.

Sorgente articolo:
UK cricketer who was target of racism apologizes for antisemitic messages – The Times of Israel