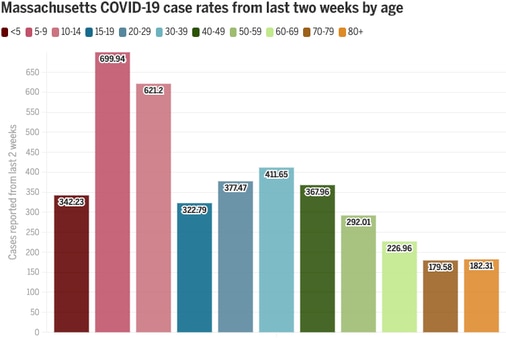 Coronavirus cases have lurched upward in recent weeks, raising concerns of trouble ahead as the weather gets colder, people go indoors and socialize during holiday celebrations, and immunity from vaccinations wanes. The DPH Thursday reported 3,196 new confirmed coronavirus cases, the highest single-day count since Feb. 6, 2020, when the state reported 3,378 confirmed cases.

State education leaders on Thursday reported 3,257 new cases among public school students and 558 among staff members for the week that ended Wednesday, a record high for a single week for both students and staff.

Dr. Philip Landrigan, a pediatrician and director of the Global Public Health Program at Boston College, said, “It’s all about the vaccination rates,” pointing out that case rates tend to be lower among more vaccinated groups and higher among less vaccinated groups.

The case rates by age are essentially “the reverse image of the vaccination rates in the various age groups,” he said in an e-mail.

Children 5 to 11 were not authorized to receive a vaccine until Nov. 2. As of Thursday, only 17 percent in Massachusetts had gotten their shots, according to state data. The numbers are better for children 12 to 15, who were authorized for shots earlier in the year. About 76 percent of them have been inoculated.

At the other end of the age range, the vaccination rate for people 65 and over is more than 99 percent.

Dr. David Hamer, an infectious disease physician at Boston Medical Center, said many children are in school, and while schools have taken steps such as testing and mask requirements to control the spread of the virus, “clearly those measures aren’t perfect … and it’s challenging to get young kids to behave.”

“You’ve basically got an unvaccinated population with a lot of close contact” and the highly transmissible Delta variant circulating, looking to spread, he said.

The good news is that children are far less likely to get seriously ill if they contract COVID-19, experts said. But there are caveats.

“Historically, the percentage of children who get seriously sick from COVID is lower than in older age groups, but some children can get extremely sick, end up in ICUs, and have persistent complications. COVID is not a benign disease at any age,” Landrigan said.

Another worry, Hamer said, is that “young children are probably shedding a lot of virus.”

He said parents need to get their children vaccinated. If they get their first doses now, he pointed out, the children could finish their two doses by Christmas.

He also said, “Families with young children who have not been vaccinated need to be really cautious with family events, where they have older, vulnerable members of their family” in the house.

Dr. Cassandra Pierre, the associate hospital epidemiologist and director of public health programs at Boston Medical Center, said, “We have certainly at our hospital, unfortunately, seen a lower uptake than expected in vaccinating 5- to 11-year-olds, as of yet.”

“Parents still have concerns about the necessity and safety of vaccination in this age group, and we really desperately need to get out information about the fact that vaccinations are safe, effective, and necessary for children — especially given the numbers that we’re seeing,” she said.

In an interesting twist, the case rate for children 0 to 4, who are not eligible to get a vaccine at all, was lower than for the children in the 5 to 9 and 10 to 14 groups.

Landrigan said the lower rate might reflect the youngest children having less contact with other people, as well as the effect of maternal antibodies passed to babies who are less than 1 year old.