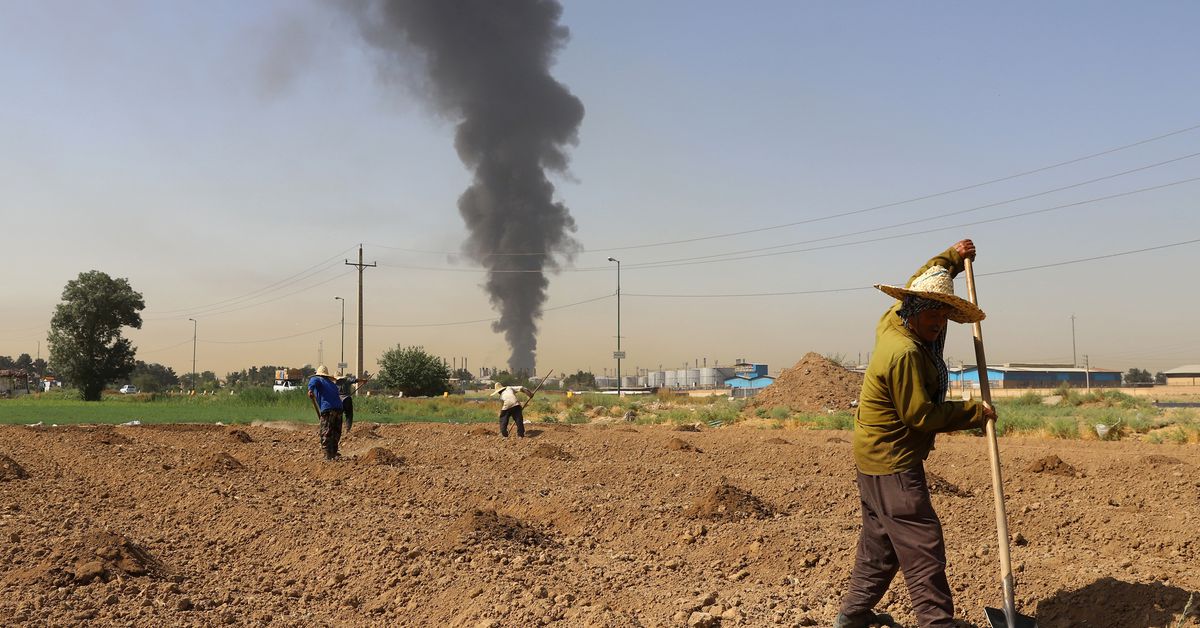 Farmers work in a field as smoke from an oil refinery rises in the background, in Tehran, Iran June 3, 2021. Majid Asgaripour/WANA (West Asia News Agency) via REUTERS/File Photo

DUBAI, Nov 19 (Reuters) – Thousands of farmers and their supporters gathered in the central Iranian city of Isfahan on Friday, state TV reported, in a major protest over water shortages in the drought-stricken region.

“Let Isfahan breathe again, revive Zayandeh Rud,” chanted some of the demonstrators in a video posted on social media as crowds gathered in the dry bed of the river where protesting farmers have set up a tent city. “Our children want water to provide food for your children,” read a sign carried by a woman.

Iran’s energy minister apologised for the water shortages. “I apologise to all of our dear farmers, and I feel ashamed for not being able to provide the water needed for their crops. With God’s help, I hope we can overcome these shortcomings in the next few months,” Ali Akbar Mehrabian told state TV.

The farmers in Isfahan province have for years protested against the diversion of water from the Zayandeh Rud river to supply other areas, leaving their farms dry and threatening their livelihoods. A pipeline carrying water to Yazd province has been repeatedly damaged, according to Iranian media.

In July, street protests broke out over water shortages in the oil-producing southwestern province of Khuzestan, with the United Nations’ human rights chief criticising the fatal shooting of protesters. Iran rejected the criticism. read more

Iran has blamed its worst drought in 50 years for the water shortages while critics also point to mismanagement.

With an economy crippled by U.S. sanctions, Iran has been the Middle East’s worst-hit country in the COVID-19 pandemic. The drought has forced Iran to import a record volume of wheat. read more