Israeli security forces raided the East Jerusalem home of a Palestinian terrorist who shot one person to death and wounded others in an attack in the capital’s Old City earlier on Sunday.

According to Palestinian media, several relatives of the gunman — Fadi Abu Shkhaydam, a Hamas member — were arrested by Israeli police in raids in the Shuafat Refugee Camp, including his daughter, brother and nephew.

A spokesperson for Israel Police’s East Jerusalem division said that they could not confirm or deny the reports as operations were still ongoing.

Abu Shkhaydam’s wife and several of their children fled Jerusalem three days before the attack, reportedly traveling to Jordan.

Video footage from Shuafat showed Israeli security forces entering Abu Shkhaydam’s home, as members of his family yell at them. In at least one case, low-level clashes broke out as Israeli border guards arrested one of his relatives.

In addition to the raid on his home, Israel Police officers also visited the Islamic boys high school where Abu Shkhaydam worked, the Rashidiya school, which is located just outside the Old City. 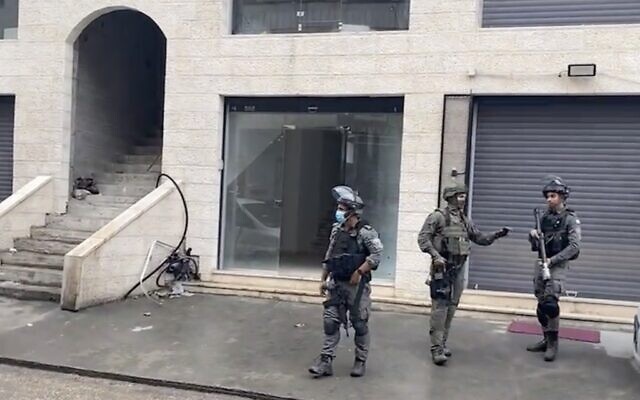 Israeli Border Guards raid the home of a Palestinian terrorist who carried out a deadly shooting attack earlier in the day, in the Shuafat Refugee Camp in East Jerusalem, on November 21, 2021. (Screen capture: al-Qastal)

A Jerusalem Municipality spokesperson confirmed that Abu Shkhaydam worked at the school and drew a paycheck from the city, although he was known to Israeli security services as a Hamas member.

“He was the best teacher. He never cursed anyone, or called anyone a bad name, except the Jews, may God burn them,” Shuafat resident Mustafa Zaattra, a student of Abu Skhaydam, told al-Qastal.

Abu Shkhaydam was a member of Hamas’s political wing and served as a terror group member in the Shuafat Refugee Camp, according to Hamas. He had five children: three sons and two daughters.

“He constantly traveled to Al-Aqsa to preserve the Muslim presence in that place. He taught at Al-Aqsa, and had also taught Islamic religious law at several schools in Jerusalem,” his uncle told al-Qastal, a local Arabic-language news site.

“We do what everyone does, we don’t do security checks,” Lion told the Kan broadcaster on Sunday afternoon.

On Sunday morning, Abu Shkhaydam, armed with a Beretta M12 submachine gun, opened fire at a group of Israeli men who were walking in the alleyways of the Old City near the Western Wall, by the Chain Gate entrance to the Temple Mount, killing one of them, seriously injuring a second and moderately wounding a third.

The man who was killed, Eliyahu David Kay, 26, was a tour guide at the Western Wall Heritage Foundation and was on his way to the site when he was killed. The two other wounded were ultra-Orthodox men who were making their way back from the Western Wall after morning prayers.

Police officers at the scene opened fire at Abu Shkhaydam, killing him. 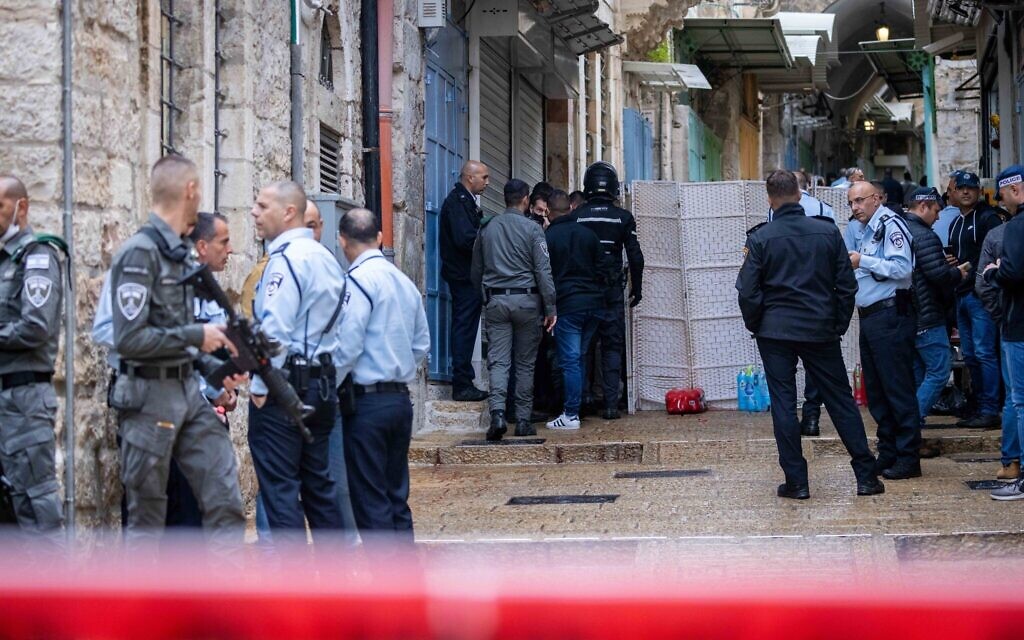 Police officers at the scene of a shooting attack in Jerusalem’s Old City on November 21, 2021. (Yonatan Sindel/Flash90)

One of the severely injured victims was taken to Shaare Zedek Medical Center, where his condition stabilized somewhat after emergency surgery but remained life-threatening, his doctors said. Another sustained moderate to severe injuries — from gunshots and from shrapnel — and was taken to Hadassah Hospital Ein Kerem.

Two police officers, aged 30 and 31, were also lightly wounded in the exchange, likely by shrapnel, according to the Israel Police. They were taken to Hadassah Ein Kerem for treatment but discharged a few hours later, the hospital said.

In video from the scene, a voice off camera can be heard repeatedly yelling “help” in Hebrew, followed by a burst of gunfire. Further shots can then be heard as police appear to chase after the assailant. 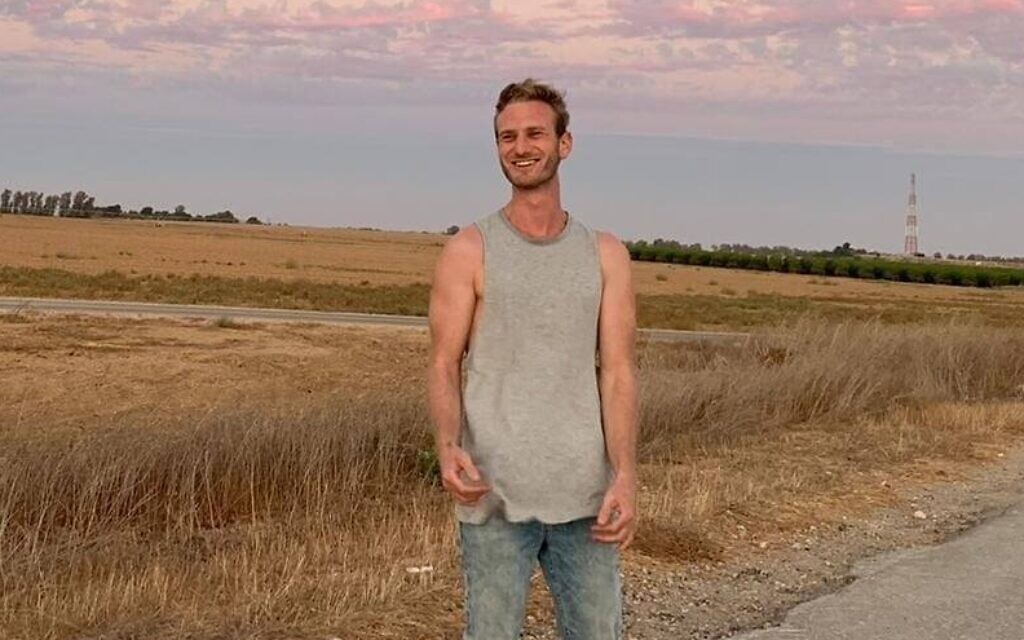 Public Security Minister Omer Barlev said the attack appeared to have been planned in advance.

“The terrorist was a member of Hamas’s political branch who regularly prayed in the Old City. His wife fled abroad three days ago, and he used standard weapons that are not commonly available in Israel,” Barlev said in remarks at the scene of the attack.

Hamas quickly took responsibility for the attack, saying it was the “price” for Israel’s actions in Jerusalem.

“The message of the heroic operation is a warning to the criminal enemy and its government to stop the attacks on our land and our holy sites. [Israel] will pay a price for the iniquities it commits against Al-Aqsa Mosque, Silwan, Sheikh Jarrah and elsewhere,” the terror group said.

On Friday afternoon — after his wife went abroad — Abu Shkhaydam shared an old Facebook post from 2014 discussing the Muslim Prophet Mohammed’s nighttime journey to the Temple Mount. The site is the holiest place in Judaism, as well as the third-holiest in Islam.

“The years go by and the words are confirmed… until God brings his command,” Abu Shkhaydam added on Friday.

The incident came several days after a stabbing attack in the Old City, in which a pair of border guards were hurt.