Intelligence provided to the British government by Shin Bet officials was reportedly instrumental in the UK’s decision last week to designate the entirety of Hamas as a terror organization and outlaw support for the group.

Several officials from the Israeli domestic security agency traveled to the UK in recent weeks to meet with their British counterparts, Channel 12 news reported Saturday night.

They provided intelligence on several individuals in key positions in the terror group as well as on funding mechanisms to finance it, the report said.

The UK’s terror designation is a major blow for the Islamist group, which carries out significant fundraising there, Channel 13 reported.

The UK proscribed the terror group’s military wing — the Izz al-Din al-Qassam Brigades — in 2001. But the Hamas political leadership remained technically in the clear until now.

This has enabled Hamas to raise funds that were channeled to institutions including Gaza’s Islamic University, the leading facility for advancing the technology used in Hamas missile and other weapons development, the Channel 13 report said.

The report also said that Israel had been working with the UK for a long time in a bid to bring about the ban, but the final decisions were made following talks between Prime Minister Naftali Bennett and his British counterpart, Boris Johnson, earlier in the month on the sidelines of the Glasgow environment summit. 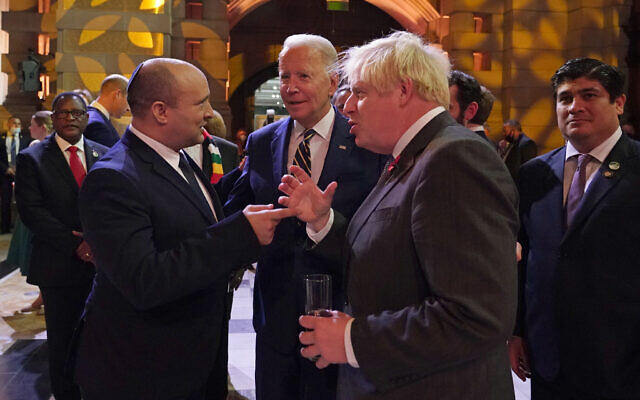 UK Home Secretary Priti Patel, who is in charge of domestic security, said on Friday on Twitter that she had “acted to proscribe Hamas in its entirety.”

The ban, which must be approved by Parliament, would make it illegal in Britain to be a member of Hamas or to express support for the group, with a maximum penalty of 14 years in prison.

The government said it hoped the banning order would be approved by Parliament within the week and take effect November 26.

Hamas reacted angrily to the decision, with spokesperson Hazim Qasim calling it “a new crime committed by Britain against our Palestinian people.”

Explaining the decision, Patel wrote that Hamas “has significant terrorist capability, including access to extensive and sophisticated weaponry, as well as terrorist training facilities.”

“We’ve taken the view that we can no longer disaggregate the sort of military and political side,” she said, according to The Guardian. “It’s based upon a wide range of intelligence, information and also links to terrorism. The severity of that speaks for itself.”

Israel welcomed the move. Bennett praised the decision, saying that there was no distinction between the terror group’s political leaders and its armed wing.

“Hamas is a terror organization, plain and simple. The ‘political wing’ enables its military activity. The same terrorists — only in suits,” he tweeted.

Departing Israel Sunday morning for an official visit to the UK, President Isaac Herzog thanked the British government for the move, calling it a “supremely important step in the war on terror.” 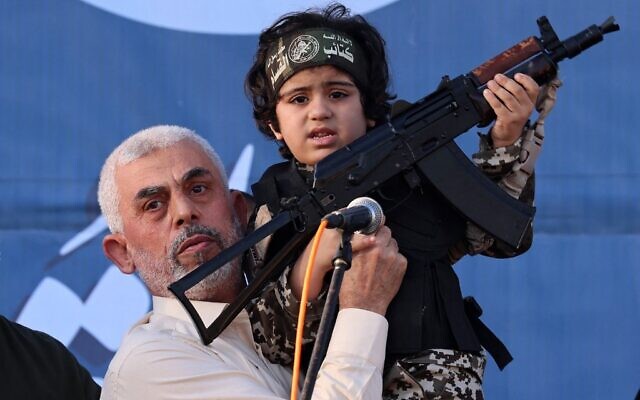 Hamas terror group leader Yahya Sinwar holds the child of an Al-Qassam Brigades member, who was killed in the recent fighting with Israel, during a rally in Gaza City, on May 24, 2021. (Emmanuel Dunand/AFP)

The United States and the European Union already consider Hamas, which seeks to destroy Israel, to be a terror group. The organization, which was founded during the First Intifada, became infamous for masterminding dozens of bloody suicide attacks against Israelis.

The Islamists took over Gaza in 2007 during a civil war with their Fatah rivals, who control the Palestinian Authority. Since then, Hamas has fought successive wars with Israel and launched thousands of rockets at Israeli cities.

A group of so-called Palestinian “resistance” factions, including Hamas, announced that they would hold an emergency meeting on Saturday in response to the announcement.