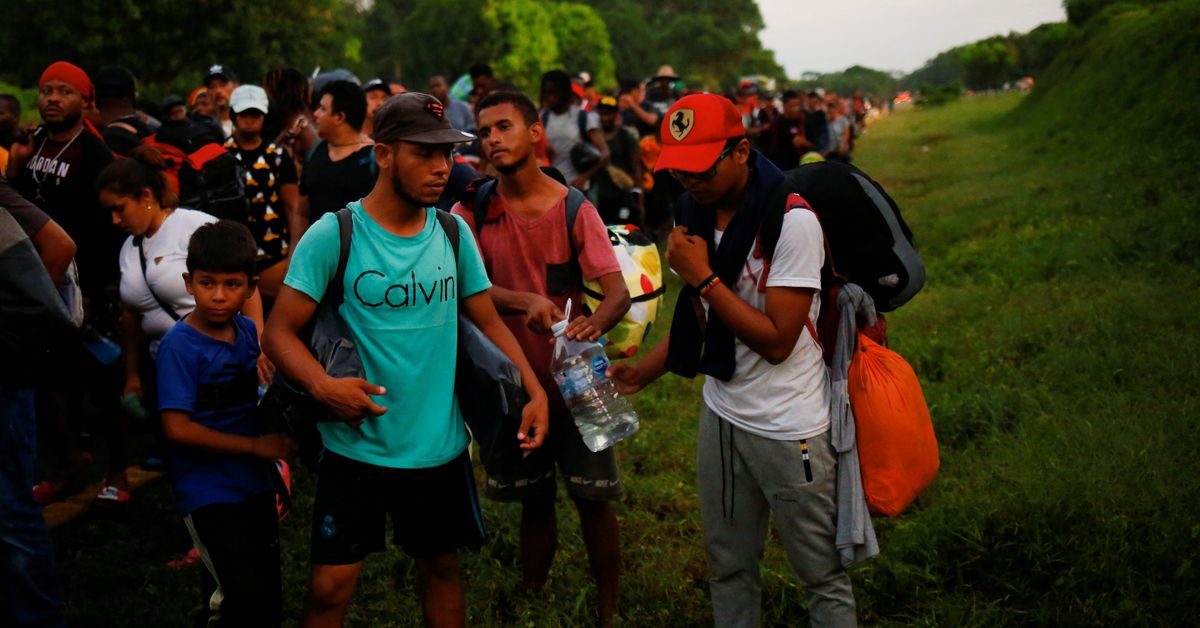 VILLA COMALTITLAN, Mexico, Nov 20 (Reuters) – Hundreds of Venezuelans are in a migrant caravan that departed this week from Mexico’s southern border with Guatemala, according to organizers, just as Mexico is mulling tighter restrictions on their access to the country.

Reuters spoke with a dozen Venezuelans who said they had left in the caravan of around 3,000 people from the city of Tapachula on Thursday after fleeing poverty and hardship in their homeland, where elections are due this weekend.

Luis Garcia, one of the caravan’s organizers, said Venezuelans made up between 20% and 30% of the group. A number related harrowing episodes on their journey from South America, particularly in Panama’s Darien region.

“I don’t want to stay in Mexico, we want to go to the United States, we just want them to let us pass,” said Daysi, a 63-year-old Venezuelan from the city of Maracaibo who joined the caravan with six relatives, including two of her children.

“Nobody leaves their country because they want to, but there are days when you eat once, others not even that, there’s no medicine, there’s nothing, we’re dying.”

The government’s National Migration Institute, which has tried to break up caravans, could not say how many Venezuelans were in the group, which also featured Central Americans.

The number of Venezuelans crossing Mexico has leapt in 2021, and Reuters last week reported the government is considering setting stricter entry requirements to stem the flow.

The caravan, the second large one to depart Tapachula within a month, has made slow progress and on Saturday reached the village of Villa Comaltitlan in the state of Chiapas.

Another 34-year-old Venezuelan woman from Caracas, who asked to remain anonymous for fear of reprisals, told Reuters by telephone she was beaten and raped by two hooded men in Darien, but resolved to continue “through the power of God.”

“They put a gun in my mouth,” she said. “I couldn’t say no because there were dead women there who resisted.”

Reuters could not independently verify her story, but she shared a document showing she had registered the sexual assault with doctors. She too planned to reach the United States so she can send money back to her baby and mother in Venezuela.