“We are on the verge of what appears to be a wave of illness affecting children,” Bennett said at the opening of the weekly cabinet meeting in Jerusalem.

“In recent days, many vaccines for children have arrived in Israel, ahead of the children’s vaccination campaign that will begin this week,” he said, calling the vaccinations the “safest and most effective way to keep our children healthy.”

“As I have already said, my son David will be one of the first to be vaccinated, and I expect the same of all Israeli parents, certainly cabinet ministers, who have children or grandchildren of the relevant age,” Bennett added.

A day earlier, as the first shipment of kid-sized Pfizer-BioNTech doses arrived in Israel, the country received a sign that the coronavirus pandemic may once again be on the rise, with the virus’s basic reproduction number increasing to 1.02.

Known as the “R-number,” the figure represents the number of people each confirmed patient infects, on average. Any number over 1 signifies infection is expanding. Health Ministry data on Sunday morning showed that 230 people had been diagnosed the previous day, with the number representing 0.81 percent of the 31,358 tests conducted.

There were 173 hospitalized individuals, of whom 131 were in serious condition. Data shows 83.3% of serious cases are unvaccinated people.

“Given the current situation, no further easing [of restrictions] is expected inside Israel at this stage,” Bennett told ministers.

On Saturday, a shipment of around one million vaccine doses was dispatched from Leipzig in Germany and landed at Ben Gurion Airport. It was then taken to Israel’s central distribution point in the city of Modiin. From there, the doses will be sent to vaccination centers across the country, with vaccinations set to be administered starting Tuesday.

Like the regimen for older children and adults, younger kids will also receive two doses of the vaccine.

Health officials were set to hold discussions from Sunday to decide how long to wait between the two shots, as well as what to recommend for children who have recovered from the coronavirus.

The children’s Pfizer-BioNTech shots, each just one-third the size of the adult doses, are packaged differently from adult doses to prevent mix-ups.

On Friday, Bennett pledged “total transparency” on the matter of inoculating children.

“I know there is a certain sensitivity around this matter. There are a lot of people who are afraid to vaccinate children, and they are not necessarily ‘anti-vaxxers’ or those who buy into conspiracy theories,” Bennett wrote in a lengthy Facebook post.

“My answer to these concerns: Total transparency,” he said.

Speaking Sunday morning to the Kan public broadcaster, Sharon Alroy-Preis, head of public services at the Health Ministry, estimated that “around half” of parents would currently not want their children to be vaccinated.

“It makes sense that part of the population is undecided and wants more data,” she said. 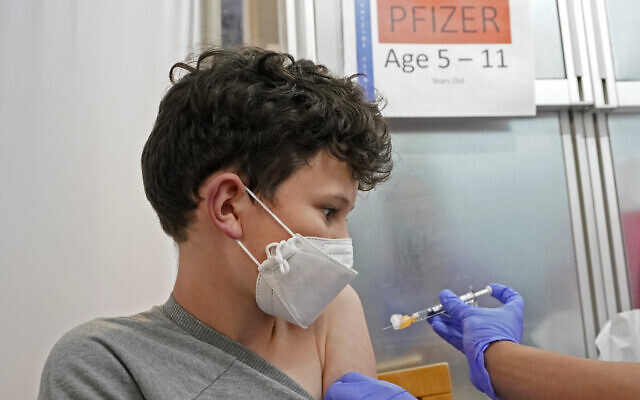 An 11-year-old gets the first shot of the Pfizer COVID-19 vaccine, on November 9, 2021, at the University of Washington Medical Center in Seattle. (AP Photo/Ted S. Warren)

She warned that the virus can still affect young children even if it is less dangerous to them than it is to the older population.

“It is true that it is more harmful to adults, but it can cause serious illness in children as well. Both during the illness itself and in the side effects afterward,” she said.

Vaccination with two shots and a follow-up booster is already available to all those aged 12 and up in Israel.

Israeli approval of the shot for children came days after the United States Food and Drug Administration granted the vaccine authorization for the 5-11 age group.

So far, more than 2.6 million children in the United States have been given the shots, meaning that around 10 percent of children there have now received their first dose.