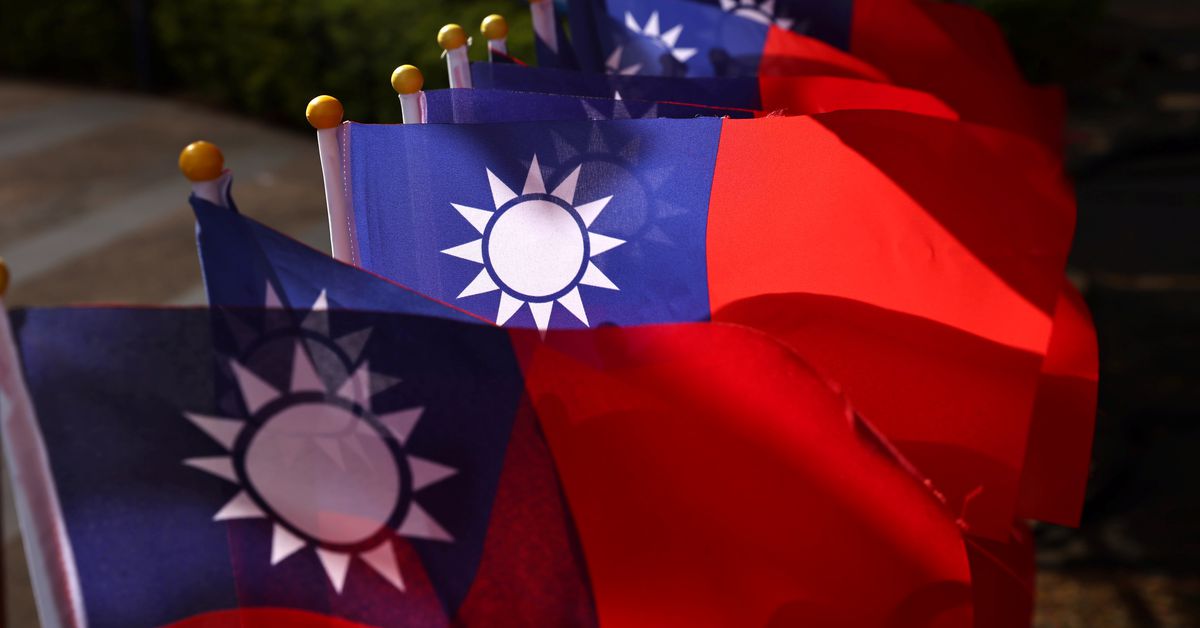 Taiwan flags can be seen at a square ahead of the national day celebration in Taoyuan, Taiwan, October 8, 2021. REUTERS/Ann Wang

TAIPEI, Nov 22 (Reuters) – Taiwan firms operating in China need to draw a line between themselves and independence supporters, China’s government said on Monday after punishing a major Taiwanese firm ostensibly for business violations.

China, which claims democratically-ruled Taiwan as its own territory, has heaped pressure on the island to accept Beijing’s rule. It said earlier this month it would hold those who support the island’s formal independence, including companies, criminally liable.

China’s official Xinhua news agency said early on Monday that law enforcement agencies across China had punished Taiwan’s Far Eastern Group, which has interests ranging from hotels to petrochemicals, for a series of problems, from tax to fire safety, and that the investigation was continuing.

In a statement late on Monday answering a question on whether the move was linked to the government’s targeting of “stubbornly pro-Taiwan independence” forces, China’s Taiwan Affairs Office did not draw a direct link, repeating Xinhua’s accusations against the company.

But it added in a separate sentence that those who support Taiwan independence threatened peace and stability and harmed the interests of the Chinese people.

“They and their connected companies and financiers must be punished in accordance with the law,” it said.

China welcomes Taiwanese companies, but does not allow those who support Taiwan independence to earn money in China, the office added.

“The majority of Taiwanese businessmen and enterprises must distinguish right from wrong, stand firm, draw a clear line with the Taiwan independence separatist forces, and take practical actions to maintain the peaceful development of cross-strait relations,” it said.

While the Far Eastern Group has not responded to requests for comment, one of its listed units, Far Eastern New Century Corp (1402.TW), said its textile operations in China had been inspected by law enforcement in the second quarter, who did find problems over tax, fire safety and environmental protection.

It added it had made almost all the changes that had been required, having been fined 36.5 million yuan ($5.72 million).

Taiwan’s government has yet to comment. Taiwan says it is already an independent country called the Republic of China, its formal name, and that Beijing has no right to speak for it or pressure its elected representatives.