Israel and Jordan on Monday signed their largest-ever cooperation agreement, which will see the construction of a major solar power plant in the Hashemite Kingdom to generate electricity for the Jewish state while a desalination plant established in Israel will send water to Jordan.

The agreement was brokered by the United Arab Emirates, which hosted a signing ceremony at the Dubai Expo. Present at the ceremony were UAE Foreign Minister Mohammed bin Zayed and US Climate Envoy John Kerry, who was involved in getting the agreement over the finish line.

The deal represented the latest byproduct of the Abraham Accords normalization agreement Israel signed with the UAE last year under the auspices of the Trump administration. The Biden administration has also pledged to build on those agreements while remaining adamant that they are not a replacement for Israeli-Palestinian peace.

The deal was reportedly first raised in a September meeting between Energy Minister Karine Elharrar and UAE Ambassador to Israel Mohamed Al Khaja, during discussions on how the UAE can help broker future regional deals in the wake of the Abraham Accords.

Elharrar met with Jordan Water and Irrigation Minister Mohammed Al-Najjar last month for the signing of a separate agreement doubling the amount of water Israel supplies to perennially parched Jordan. 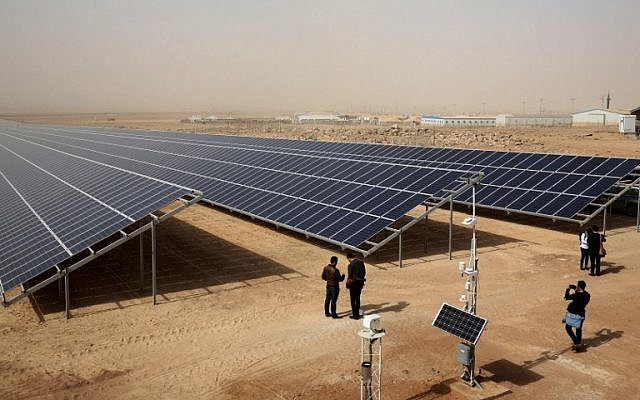 A solar plant during its official inauguration at the Zaatari refugee camp in Jordan, on November 13, 2017. (AFP Photo/Khalil Mazraawi)

The Israeli minister said the agreement was the “most significant” since the former enemies signed a peace treaty in 1994.

“The benefit of this agreement is not only in the form of green electricity or desalinated water, but also the strengthening of relations with the neighbor that has the longest border with Israel,” she said in a Monday statement.

“The Middle East is on the frontline of the climate crisis,” Kerry said in his own statement. “Only by working together can countries in the region rise to the scale of the challenge.”

There was no statement immediately available from the Jordanian side, which has long publicly downplayed its ties with Israel.

Feasibility studies for the project are due to start next year.

Jordan is one of the world’s most water-deficient nations and its cooperation on water with Israel dates back to before the two established formal relations. 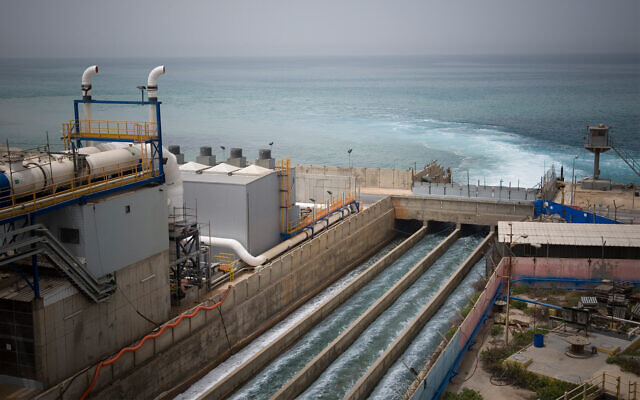 Illustrative: A desalination plant in Hadera, May 16, 2010. (AP Photo/Ariel Schalit)

Israel is also a hot, dry country, but its advanced desalination technology has opened opportunities for selling freshwater.

The declaration of intent says the Jordan photovoltaic plant with a capacity of 600 MW will export green power to Israel, which will supply Jordan with up to 200 million cubic meters of desalinated water.

Experts say the future cooperation could help improve relations, which Jordan’s King Abdullah has described as a “cold peace.”

Under their 1994 peace treaty, the Jewish state recognized Jordan’s oversight of Muslim holy sites in East Jerusalem, which was captured by Israel in the 1967 Six Day War.

But there are often demonstrations in Jordan in solidarity with the Palestinians. 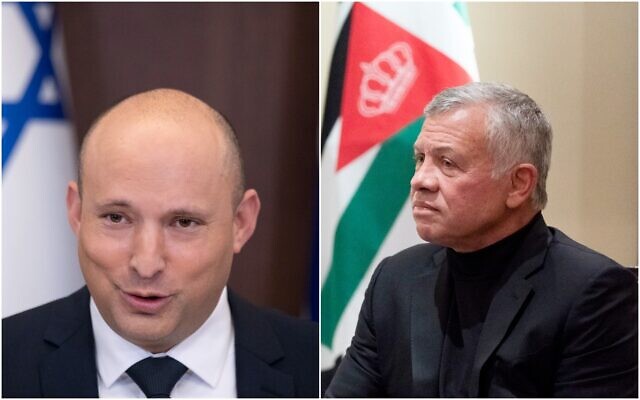 Prime Minister Naftali Bennett, who took over in June, has made strengthening ties with Amman a priority. In July, the premier met with King Abdullah II in secret at the crown palace in Amman, in the first summit between the countries’ leaders in over three years.

Shortly thereafter, the countries announced that Israel would sell 50 million cubic meters of water a year to Jordan, doubling what it already supplies, and in October agreed to raise the amount further.

According to the Walla news site, Monday’s agreement was supposed to have been signed at the COP26 Climate Summit in Glasgow at the beginning of the month, but Bennett pushed for a delay out of fears that the deal would spark criticism from the opposition days before the coalition was seeking to pass the annual budget.