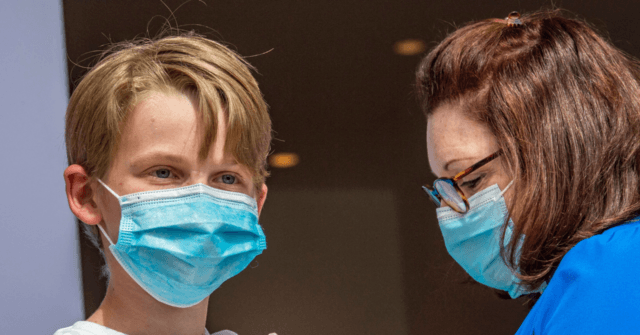 The UK’s National Health Service (NHS) is reportedly making preparations to vaccinate children as young as five years old by the Spring.

Leaked plans for Britain’s vaccination rollout, widely reported in the British media including The Guardian, allegedly include proposals to jab children between the age of five and 11 years old in an effort to contain the spread of the Chinese coronavirus.

“Top secret plans reveal what is at stake if we are to achieve a meaningful victory over Covid. Asking parents for permission to jab kids as young as five is in the schedule,” a senior source told The Sun newspaper.

“Nothing is in the public domain yet, and the plans could change, but jabbing young children is backed by many scientists,” the source continued, adding: “It is controversial, but will help us reach our goal.”

A spokesman for NHS England would not deny the veracity of the report, saying per Sky News: “The NHS regularly plans for how it would operationalise opening vaccines to more people so it is ready to extend the jab quickly when and if any decision is recommended by the JCVI.”

Should the government wish to extend the vaccination programme to youngsters between the ages five and 11, it would need to be signed off by the Medicines and Healthcare products Regulatory Agency (MHRA) and would need to take into consideration recommendations from the Joint Committee on Vaccination and Immunisation (JCVI).

A spokesman for the MHRA said: “Extending the use of a COVID-19 vaccine to children aged five to 11 would only be authorised if the expected standards of safety, quality and effectiveness are met.

“As with children aged 12 and above, parents can be fully assured that for any potential authorisation in this age group, the safety of the children would be our top priority.”

Announcing the decision England’s Chief Medical Officer, Chris Whitty argued that it was necessary to vaccinate children in order to reduce “disruption” in schools.

The decision from the government came despite the Joint Committee on Vaccination and Immunisation (JCVI) not recommending vaccinating children, arguing that the “marginal” benefits of giving children jabs were not enough to justify the move. However, the JCVI said that it was not in the agency’s “remit” to make the final call, saying that the government must also consider the “societal” impacts of the vaccine programme.

A study in July found that children only accounted for 0.005 per cent of all COVID-19 deaths in the UK.

The Centers for Disease Control and Prevention in the United States approved the use of the Pfizer vaccine for children between five to 11 earlier this month, albeit at a smaller dosage than given to adults and teenagers.

Hailing the decision, President Joe Biden described it as a “turning point” in the fight against the virus, saying: “It will allow parents to end months of anxious worrying about their kids, and reduce the extent to which children spread the virus to others.”