US officials have warned Israel that its attacks against the Iranian nuclear program are counterproductive and have enabled Tehran to rebuild an even more efficient enrichment system, the New York Times reported Sunday.

Citing officials familiar with the behind-the-scenes discussion between Washington and Jerusalem, as the US continues to try and bring Iran back into the nuclear deal, the report said that Israeli officials have dismissed the warnings, saying they have “no intention of letting up.”

Noting that in the last 20 months there have been four explosions at Iranian nuclear facilities attributed to Israel, along with the killing of Iran’s top nuclear scientist, the report said US officials have cautioned their Israeli counterparts that while such efforts may be “tactically satisfying,” they are “ultimately counterproductive.”

In the wake of the explosions, which took uranium enrichments plants offline and destroyed dozens of centrifuges, the Americans noted that Iran has managed to resume enrichment within months, often installing newer machines that can enrich uranium far faster.

However, the officials said Israel appeared unmoved by the arguments, and this was one of the many areas on which the US and Israel disagree regarding efforts to thwart Tehran’s drive to build nuclear weapons.

Further complicating matters was the fact that Iran has apparently managed to improve its defenses, particularly in the cyber field, the report said. As a consequence, cyber attacks like the Stuxnet attack that crippled centrifuges at the Natanz nuclear enrichment site for more than a year, an attack widely reported to be a joint US-Israeli effort, have become “much harder now to pull off.” 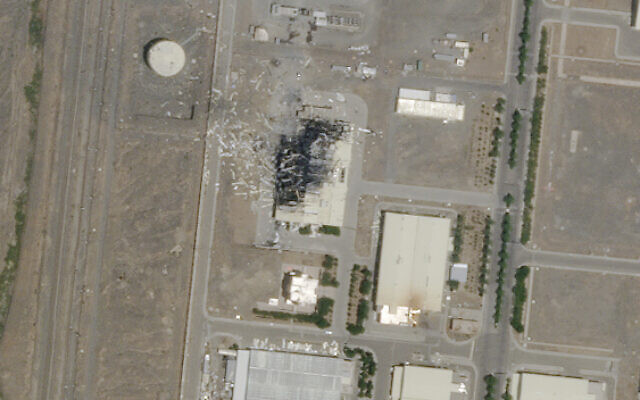 The aftermath of an explosion and a fire at an advanced centrifuge assembly plant at Iran’s Natanz nuclear site, July 5, 2020. (Planet Labs Inc. via AP)

The major concern now was how close Iran has come to being able to build a nuclear weapon since then-US president Donald Trump withdrew the US from the deal in 2018.

This week, with Iran set for talks with world powers in Vienna on November 29, the International Atomic Energy Agency said Tehran had again increased its stockpile of highly enriched uranium.

Iran’s stockpile, as of November 6, was many times in excess of the limit laid down in the agreement with world powers, said the IAEA report. Such highly enriched uranium can be easily refined to make atomic weapons, which is why world powers have sought to contain Tehran’s nuclear program.

The Vienna-based agency told members that it is still not able to verify Iran’s exact stockpile of enriched uranium due to the limitations Tehran imposed on UN inspectors earlier this year.

The IAEA has been unable to access surveillance footage of Iranian nuclear sites or of online enrichment monitors and electronic seals since February. The agency’s chief, Rafael Mariano Grossi, told The Associated Press this month that the situation was like “flying in a heavily clouded sky.” 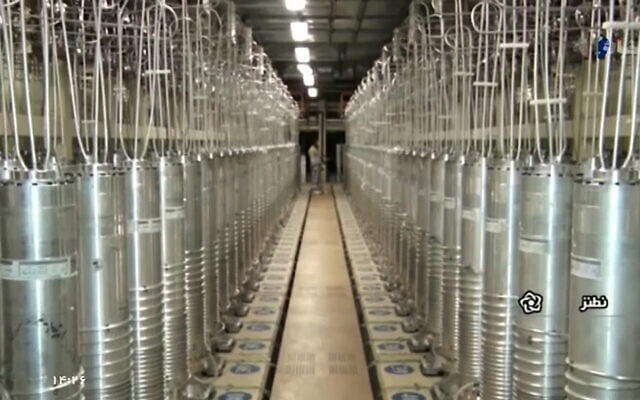 In this image, made from an April 17, 2021 video released by the state-run TV station Islamic Republic Iran Broadcasting, various centrifuge machines line a hall at the Natanz Uranium Enrichment Facility. (IRIB via AP)

Sunday’s NYT report said that since abandoning the agreement, Iran had managed to reduce its breakout time to a bomb from about a year to just a few weeks.

“Before Mr. Trump decided to scrap the deal, Iran had adhered to the limits of the 2015 agreement — which by most estimates kept it about a year from ‘breakout,’ the point where it has enough material for a bomb. While estimates vary, that buffer is now down to somewhere between three weeks and a few months, which would change the geopolitical calculation throughout the Middle East,” the report said.

US officials have publicly warned that Iran’s violations are making it increasingly unlikely that there can be a return to the 2015 deal as it was.

The US envoy for Iran Robert Malley warned Friday that Tehran was approaching the point of no return for reviving a nuclear deal after it boosted its stocks of enriched uranium before the talks resume this month.

“The time will come if Iran continues at this pace with the advancements they’ve made, [it] will make it impossible even if we were going to go back to the JCPOA to recapture the benefits,” Malley told the Manama Dialogue conference in Bahrain, referring to the deal by its official name, the Joint Comprehensive Plan of Action.

“Iran’s advances are spreading alarm across the region… that’s what’s making the clock tick faster and making all of us say that the time is short for a return to the JCPOA,” Malley said. 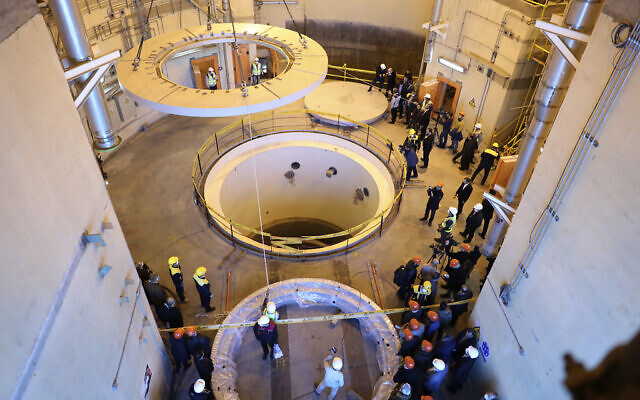 “And I want to be clear, because there’s no ambiguity about what they seem to be doing now, which is to drag their feet on the nuclear talks and accelerate the progress in their nuclear program,” he added.

The US envoy said he was not encouraged by the statements from the new Iranian government of President Ebrahim Raisi, which earlier on Friday accused Washington of conducting a “propaganda campaign” against the country.

With the possibility of a return to the 2015 deal fading, the US was examining the possibility of hammering out an interim deal with Iran, the New York Times report said, confirming a separate report last week. “Inside the White House, there has been a scramble in recent days to explore whether some kind of interim deal might be possible to freeze Iran’s production of more enriched uranium and its conversion of that fuel to metallic form — a necessary step in fabricating a warhead,” the Times said. “In return, the United States might ease a limited number of sanctions. That would not solve the problem. But it might buy time for negotiations, while holding off Israeli threats to bomb Iranian facilities.”

A pair of American sources said Sullivan and Hulata were just “brainstorming,” and that the proposal was suggested by an unspecified European ally of the US.

The US sources said the proposal was for Iran to suspend a disallowed nuclear activity such as enriching uranium to 60 percent, in exchange for the US and allied countries releasing some frozen Iranian money, or issuing sanctions waivers on humanitarian goods.

An unnamed Israeli official cited in the Axios report said Hulata told Sullivan he was against the idea and Israel’s concern was that any interim agreement could become permanent, allowing Iran to maintain its nuclear infrastructure and supply of uranium it has built up.

The US has been trying to reassure its allies in recent days that if diplomacy fails, other options are available.

“The United States remains committed to preventing Iran from gaining a nuclear weapon. And we remain committed to a diplomatic outcome of the nuclear issue,” US Defense Secretary Lloyd Austin said at the Manama event, which was put on by the International Institute for Strategic Studies.

“But if Iran isn’t willing to engage seriously, then we will look at all of the options necessary to keep the United States secure,” he said.

Israel has been more direct, repeatedly warning it will attack Iran’s nuclear program and allocating billions of dollars to the military to prepare and train for a potential strike.

Sorgente articolo:
US warns Israel its attacks on Iran nuclear program are counterproductive — NYT – The Times of Israel