Amid burgeoning relations between Israel and Morocco following a normalization agreement last year, Defense Minister Benny Gantz will travel to Rabat on Tuesday evening for two-day trip that will “formalize” cooperation between the two countries, officials said.

Gantz was expected to meet with his counterpart, Abdellatif Loudiyi, and with Moroccan Foreign Minister Nasser Bourita.

It will be the first time that an Israeli defense minister makes an official visit to the North African kingdom and the second state visit by an Israeli elected official since the two countries normalized ties last year in a deal brokered by former US president Donald Trump’s administration. As part of the agreement, Washington recognized Moroccan sovereignty over the disputed territory of Western Sahara.

Gantz was scheduled to take off from Israel at 7 p.m., landing in Rabat late Tuesday night. He will hold a series of meetings with Moroccan officials, take part in a number of ceremonies around the Moroccan capital and visit a local Jewish community before returning to Israel on Thursday night.

While there, Gantz will sign “a memorandum of understanding that will outline defense cooperation between the two countries,” his office said.

The trip aims to “set the foundation for all future security cooperation between Israel and Morocco,” a source familiar with the visit told AFP.

“Until now there has been some level of cooperation. This truly formalizes it,” the source said.

Since last year, after the two countries normalized ties, Jerusalem and Rabat have signed a number of memoranda of understanding on issues like civil aviation, petroleum drilling, water resource research and finance. The two countries also reopened their respective liaison offices, which had been shuttered after Morocco halted ties with Israel at the outset of the Second Intifada in 2000. 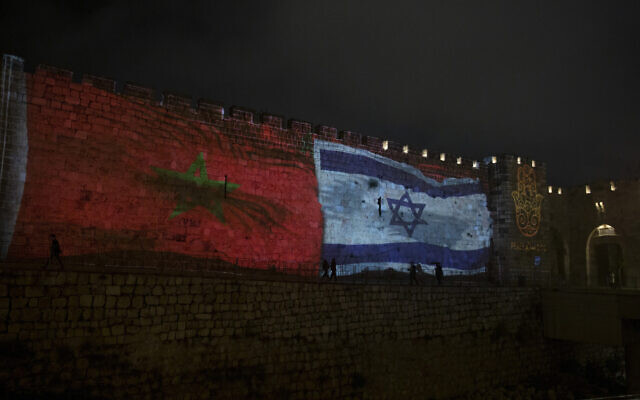 The national flags of Israel and Morocco are projected on the walls of the Old City of Jerusalem, December 23, 2020. (AP Photo/Maya Alleruzzo)

The deals that were expected to be signed during Gantz’s visit were set to include a number of agreements pertaining to arms sale from Israel to Morocco and other defense-related issues.

One Israeli product, NSO’s Pegasus spyware, has already made its way to Morocco, causing a minor diplomatic tiff, according to Amnesty International and Paris-based organization Forbidden Stories.

Rabat allegedly used it against French President Emmanuel Macron — a claim denied by Morocco, which said it never bought the software and has filed lawsuits against French media and Amnesty International. The incident strained relations between Paris and Jerusalem.

A spokeswoman for Gantz would not comment on NSO or other possible defense technologies set to be discussed during the visit.

Foreign Minister Yair Lapid visited Morocco in August to officially open the Israeli Liaison Office in Rabat as well as meet with officials and sign a series of agreements. 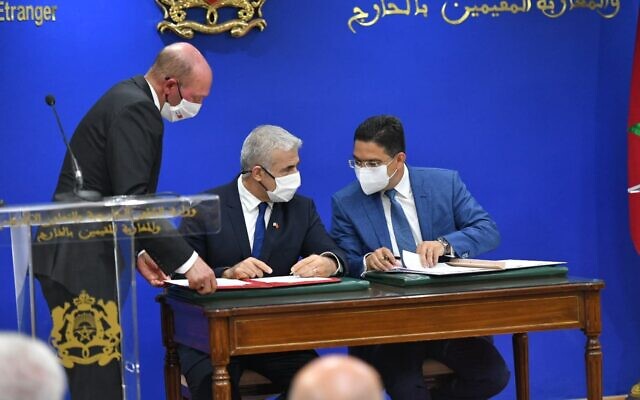 Morocco’s ancient Jewish community is the biggest in North Africa, with some 3,000 still living in the kingdom. A further 700,000 Israelis are descended from Moroccans and have kept strong links with the country.

Before the coronavirus pandemic and the normalization deal, tens of thousands of Israeli tourists visiting Morocco each year had to pass through a third country.

Timing of trip ‘not coincidental’

Morocco controls most of Western Sahara and considers the former Spanish colony as its sovereign territory.

Tensions have flared between Morocco and Algeria, which backs the Western Sahara’s Polisario Front independence movement. 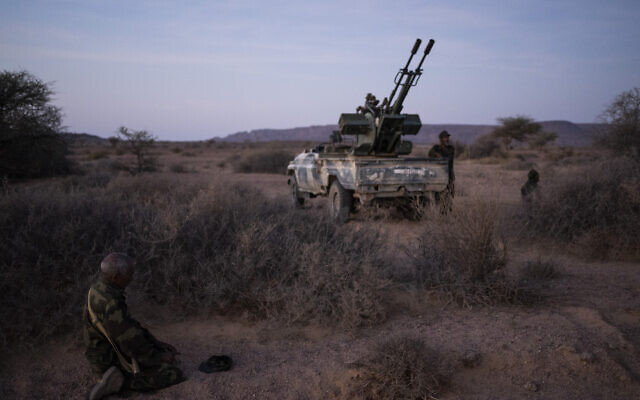 Earlier this month, Algiers accused Morocco of killing three Algerian civilians on a desert highway, raising fears of an escalation.

And Polisario head Brahim Ghali said last week that the movement has decided to step up military operations.

Bruce Maddy-Weitzman, an Israeli expert on Morocco, said the timing of Gantz’s visit and the signing of an MOU was not a coincidence.

“It’s possible that in the context of the Moroccan-Algerian tensions, the Moroccans were the ones who were keen on this,” he said.

“It would seem to me that the Moroccans are the ones who are keen on showing everybody – their own public, their Algerian rivals, the West — that they are deepening their relationship with Israel,” said Maddy-Weitzman, a Tel Aviv University professor.

Morocco and Israel previously set up ties in 1993 but Rabat broke them off at the start of the Second Intifada in 2000.

However, the Israeli-Palestinian conflict continues to mobilize civil society, Islamists and the far-left in Morocco, with a call for a November 29 demonstration against “creeping normalization with Israel” and in support of the Palestinians.

According to Maddy-Weitzman, while Rabat has not abandoned the Palestinian cause, “there are too many other interests in play, too many other benefits to be gained by recalibrating.”

“Most of the countries in the region just don’t want to be held hostage anymore on the issue, they want to pursue their interests as they define them, and at this point in time obviously Israel has a lot to offer,” he said.

Sorgente articolo:
Gantz heads to Rabat to formalize defense ties with Morocco – The Times of Israel