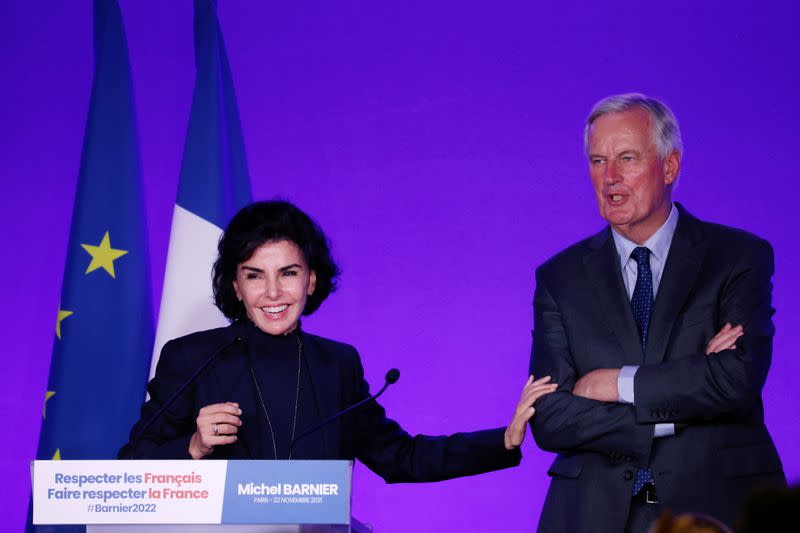 By Elizabeth Pineau and Richard Lough

PARIS (Reuters) -Michel Barnier, the former European Union Brexit negotiator and now a challenger for the French presidency, said France had lost control of immigration and that a sense of impunity prevailed.

Barnier, who is locked in a five-way race for the centre-right Les Republicains party’s nomination, lamented France’s “big decline” and said President Emmanuel Macron’s leadership style was too arrogant and single-minded to heal divides.

“Immigration is out of control,” Barnier, 70, told Reuters before addressing party members in Paris late on Monday. “Our security is no longer guaranteed. There is a sense of impunity and insecurity throughout the country.”

Barnier proposes a moratorium on immigration to fix Europe and France’s broken rules on migration, wants soldiers to patrol some communities where police are seen to have lost control and advocates a referendum on restoring military service.

An erstwhile moderate of the centre-right, Barnier dismissed the suggestion he was being drawn onto far-right turf to win back conservative voters from far-right figures Marine Le Pen and Eric Zemmour.

“I’m looking at the problem my country faces,” he said.

Macron’s government rejects the accusation it has lost control of the number of foreigners in France. INSEE, the official statics agency, says net migration numbers have been rising since the start of the 2000s.

The race for the centre-right ticket is led by Xavier Bertrand, who heads the northern Hauts-de-France region, and Valerie Pecresse, leader of the Ile de France region around Paris, but Barnier has emerged as a credible challenger.

The party rivals have said they will back whoever wins next week’s two-round vote by signed-up party members. Registrations have nearly doubled in recent weeks to about 150,000 and the outcome is uncertain.

All are running on ideologically similar platforms, and trail Macron, Le Pen and Zemmour in opinion surveys.

Barnier’s popularity partly lies in his loyalty to the party – Bertrand and Pecresse quit after Macron’s 2017 election win before returning. Some consider him “presidential” for maintaining unity among the remaining EU countries during Brexit talks with Britain.

“France doesn’t need a third candidate who gets too close to the far-right of politics. It needs someone who pulls us together,” said Barnier supporter Aurelien Boulanger.

Barnier said he was worried by distrust between London and European capitals since Britain completed its departure from the EU’s orbit at the start of this year. Britain is embroiled in a fishing licence row with France and a dispute with Brussels over trade rules for goods flowing into Northern Ireland.

Asked whether he trusted British Prime Minister Boris Johnson, Barnier said: “The question is whether he respects his own signature and the commitments undertaken by his government.”

Critics say Barnier lacks charisma and punch. For Barnier, who pitches himself as a conciliator, that is the point.

“My wife tells me I need to be more humorous. It’s a work in progress,” Barnier told party supporters, most of them white, middle-class and middle-aged or older. “But the presidency is serious.”