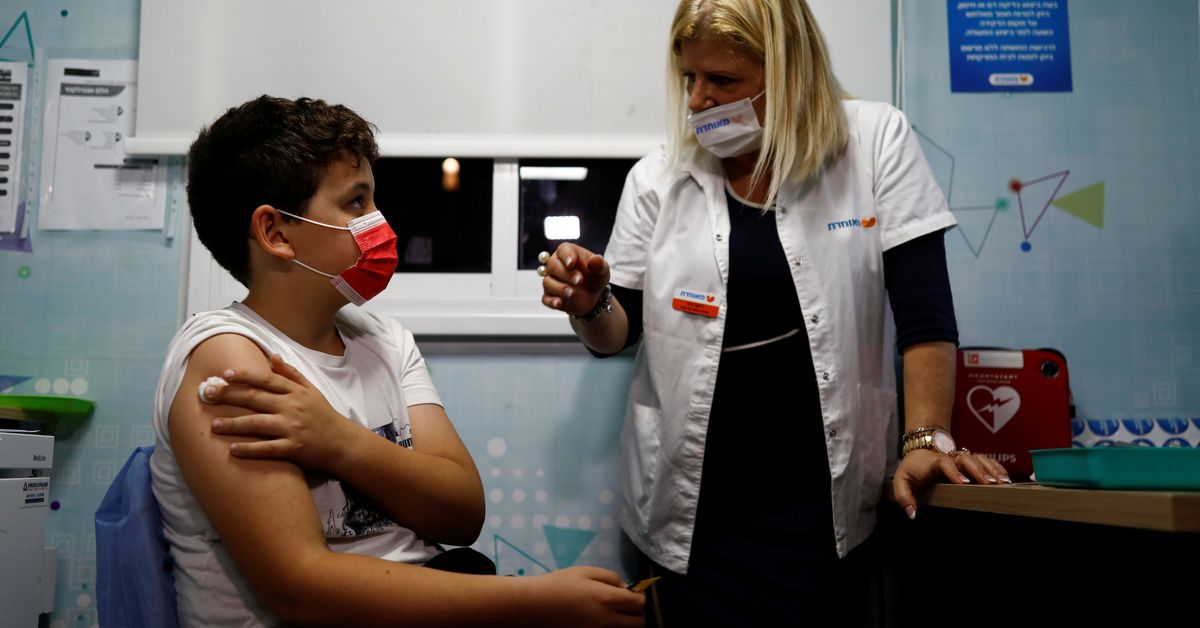 JERUSALEM, Nov 22 (Reuters) – Israel began rolling out Pfizer/BioNtech COVID-19 vaccinations for 5- to 11-year-olds on Monday hoping to beat down a recent rise in coronavirus infections.

A fourth wave of infections that hit Israel in June began subsiding in September. But over the past two weeks the “R”, or reproduction rate of the virus, that had remained below one for two months began climbing and has now crossed that threshold, indicating the virus could again be spreading exponentially.

Daily cases have also crept up over the past few days, with half the confirmed infections presently among children age 11 and younger.

The children’s vaccine drive kicked off on Monday in a Tel Aviv square, where a small number of parents quietly lined up with their children to get shots. The campaign will go nationwide on Tuesday.

“The kids go to school, they (mix) with (other) kids, and they are doing a lot of social activities. We are very excited (to) vaccinate them and get (back) to normal life,” said Katy Bai Shalom, whose son and daughter were vaccinated Monday.

Receiving their shots in front of television cameras, some of the children smiled and laughed, while others teared up and held on to their parents.

Israel’s 9.4 million population is relatively young, with around 1.2 million children in the 5-to-11 age group. By November, that group comprised more than a third of new cases, according to health ministry data. Scientists and officials have been doubtful the country can reach “herd immunity” unless children are vaccinated.

Policy makers also say that the vaccination of younger children is meant first and foremost to protect their individual health and not just to stop the transmission of the virus.

In the past week they have stressed that although COVID-19 is rarely severe among young children and many show no symptoms at all, it can carry risks in the longer term.

Israel’s health ministry estimates that one in 3,500 children infected with the coronavirus will later develop Multisystem Inflammatory Syndrome in Children (MIS-C) in which parts of the body become inflamed, including the heart, lungs, kidneys, brain, skin and gastrointestinal organs. Most children who suffer from the condition require intensive care treatment and 1-2% die.

Officials have also noted the risk of lingering symptoms, such as sleep disruption, muscle pain, loss of smell and taste, headaches and a cough, commonly known as “long Covid”.

A survey by the health ministry of more than 13,000 children showed that around 11% had suffered lingering symptoms, with about 1.8% to 4.6%, depending on their age, continuing to experience symptoms six months after becoming ill.

Israel has recorded 1.3 million total confirmed cases and more than 8,000 dead since the start of the pandemic.

Around 57% of Israel’s population is fully vaccinated, according to the health ministry, which means they have either received a third shot or it has not yet been five months since they received their second.