The Knesset gave its initial approval Monday night to a bill limiting prime ministers to a maximum of eight years in office.

The coalition passed the first reading of the legislation by 66 to 49 votes in the 120-seat parliament, with the opposition’s Joint List party joining its ranks to support the bill.

The legislation must clear two more Knesset plenum readings before becoming law. It will now be dealt with by the Knesset Constitution and Law Committee, before being returned for its second and third readings.

The bill, being an amendment to Israel’s semi-constitutional Basic Laws, requires the support of a minimum of 61 Knesset members for each vote. With one coalition MK skipping the vote Monday — Yamina’s Yomtov Halfon — the six Joint List votes in favor secured its passage.

After a ministerial committee greenlit the legislation last week, ministers voted in favor of advancing the bill on Sunday.

The proposed amendment would force a prime minister to step down after eight consecutive years in power, requiring the formation of a new government, though not necessarily new elections.

The bill also bars a person from being premier even if one has served two non-consecutive terms as prime minister, if no more than three years separate the tenures.

If the gap between the tenures is more than three years, the eight-year counter is reset, according to the bill.

Presenting the law to the plenum, Justice Minister Gideon Sa’ar said that, “Prolonged rule of one person is a harmful thing. In the face of the dangers of excessive concentration of power, and the resulting corruption, we offer a better and more balanced arrangement that a large majority of Israeli citizens prefer to the threat of unlimited tenure.” 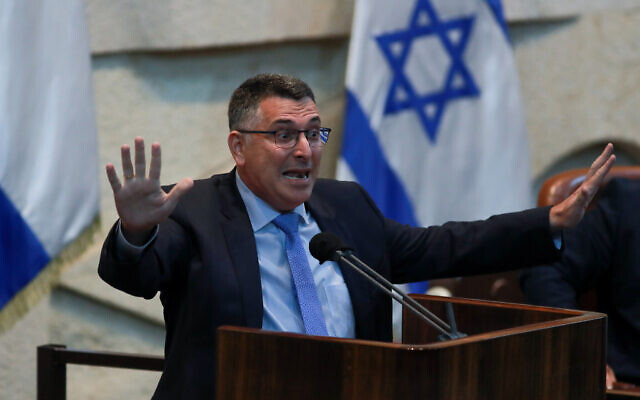 Justice Minister Gideon Sa’ar speaks ahead of a vote on his bill limiting prime ministers to eight years in office, at the Knesset in Jerusalem, November 22, 2021. (Yonatan Sindel/Flash90)

Likud MKs railed against the proposal, saying it was a “personal law” aimed at keeping former prime minister Benjamin Netanyahu from returning to power.

“It is quite clear that this government was formed only to prevent Netanyahu from continuing his leadership, a leadership that is so lacking today in Israeli society and the State of Israel,” MK Miri Regev said in her speech opposing the law from the Knesset podium.

MK Yisrael Katz said the proposed legislation has “no serious content to it, only personal vendetta.”

If passed into law, however, the eight-year term limit would not be applied retroactively, and therefore would not prevent now-opposition leader Netanyahu from again running for office.

Cumulatively, Netanyahu has served as prime minister for 15 years, 12 of them consecutively since 2009. He is currently on trial in three corruption cases, though he denies any wrongdoing.

Setting term limits with the aim of curtailing Netanyahu’s political career was a key element in negotiations to form the current coalition government.

Tweeting after Monday’s vote, Foreign Minister Yair Lapid said that limiting the prime minister’s term was something that his party has been “promoting for many years and now it has finally arrived.” Sa’ar insists that the bill was not aimed personally at Netanyahu, though he is also working on legislation that would rule out as a potential premier anyone indicted for a crime that comes with a minimum three-year sentence and moral turpitude.

Such a law would apply to Netanyahu and would keep him out of the prime minister’s seat. That proposal was said to be backed by the Yesh Atid and Yisrael Beytenu parties, along with Sa’ar’s New Hope party.

The proposed law, if approved, would take effect after the next elections, when a new Knesset is sworn in.

A separate bill limiting the terms of mayors would also be advanced later, Sa’ar has said. It too would limit them to two terms, but allow a third term if they receive more than 50 percent of the vote.