Israeli forces struck a site in Homs in central Syria in the early hours of Wednesday morning, according to Syrian state TV. Two civilians were killed and a third civilian was wounded, and six soldiers were injured in the attack, according to reports in Syrian media.

According to reports, Syria’s air defenses were activated in response to the attack. Damage was caused to several structures, the military claimed, according to Reuters. The SANA News Agency claims that Syrian forces shot down several missiles.

There was no comment from the Israel Defense Forces, in line with its policy of ambiguity regarding its specific activities in Syria.

Last Wednesday, Syrian state media reported that the IDF had fired missiles at a target near the capital of Damascus. In that incident, Israeli forces in the Golan Heights fired two surface-to-surface missiles at an empty warehouse south of the city at around 12:45 a.m., according to SANA.

The report said there were no casualties and also claimed that Syrian defenses downed one of the Israeli missiles.

There has been an uptick in the number of strikes allegedly carried out by the Israeli military in recent weeks, including a rare early evening attack in the area of Homs earlier this month. 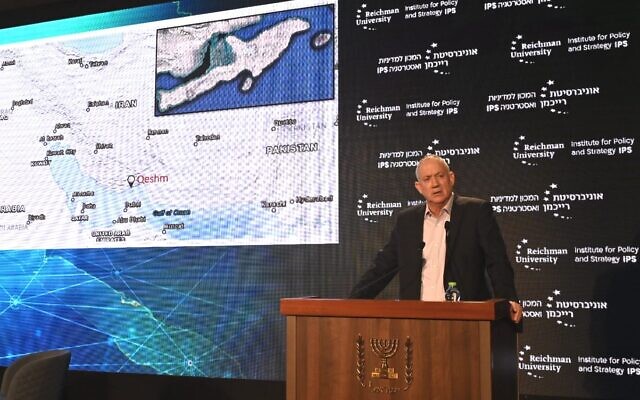 Defense Minister Benny Gantz reveals the location of an alleged Iranian drone base off the southern coast of Iran during a speech at Reichman University on November 23, 2021. (Ariel Hermoni/Defense Ministry)

Wednesday’s predawn attack was the fifth attributed to Israel in the past few weeks.

On Tuesday, Defense Minister Benny Gantz revealed that Iran uses drones to attack Israel and has even sent a drone from Syria with weapons intended for terrorists in the West Bank. In his speech, Gantz noted Iran’s use of proxies across the region, in Syria, Yemen, Lebanon and Iraq. The defense minister accused Iran of seeking to take over not only the Middle East, but the entire world. “Iran’s method is simple: First we take Damascus, then we take Berlin,” he said.

Several of the recent purported Israeli attacks on Syria were allegedly conducted with surface-to-surface missiles, instead of airstrikes with fighter jets, as part of an apparent arrangement with Moscow, as the Russian-made air defenses being used by Syria have struggled to counter the Israeli air raids, embarrassing Russia.

Israeli officials have expressed increasing concern over the proliferation of Iranian-made surface-to-air missile systems in Syria, as well as the Syrian military’s improved air defense capabilities, which have made it more difficult for the IDF to operate over Syria.

Israel has carried out hundreds of airstrikes inside Syria over the course of the country’s civil war, targeting what it says are suspected arms shipments believed to be bound for Lebanon’s Iran-backed Hezbollah terror group, which is fighting alongside Syrian government forces.