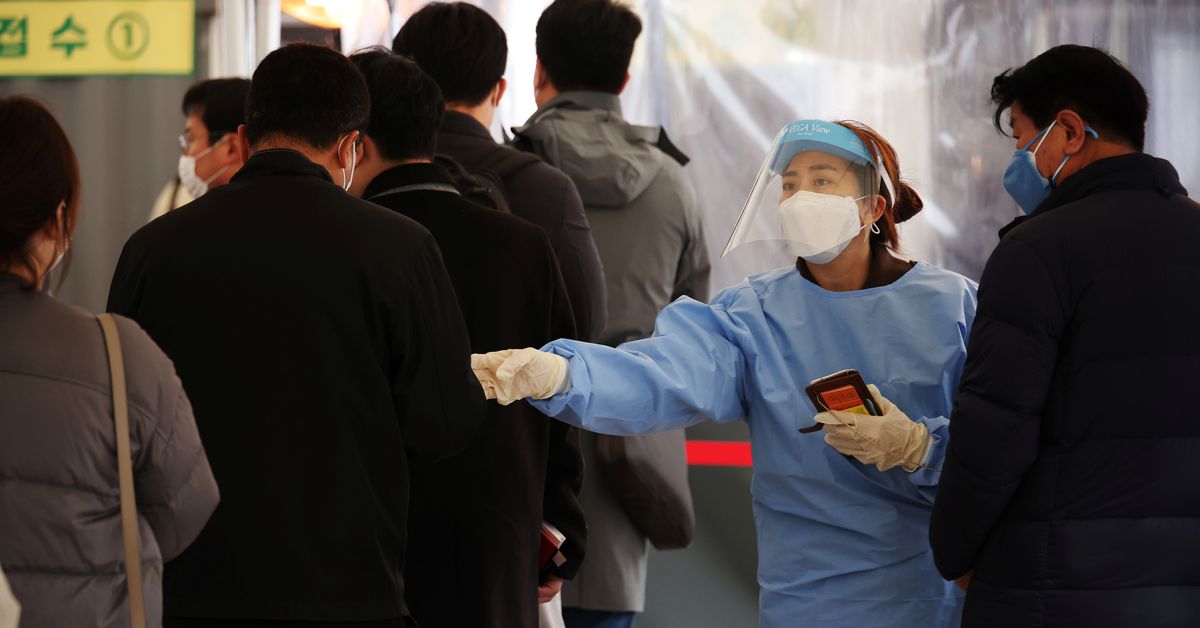 SEOUL, Nov 24 (Reuters) – A little known sect led by a pastor who pokes eyes to heal is at the centre of a COVID-19 outbreak in South Korea, as the country reported a new daily record of 4,116 cases and battles a spike in serious cases straining hospitals.

In a tiny rural church in a town of 427 residents in Cheonan city, south of Seoul, at least 241 people linked to the religious community had tested positive for coronavirus, a city official told Reuters on Wednesday.

“We believe the scale of the outbreak is large…,” the Korea Disease Control and Prevention Agency (KDCA) said in a statement.

About 90% of the religious community was unvaccinated and the majority were in close contact through communal living.

Many of the congregation were elderly in their 60s and above and were unvaccinated, the city official said. Just 17 out of the 241 confirmed cases had been vaccinated.

“I believe it’s the church’s anti-government beliefs that refrained the believers to get the vaccine,” the official said, adding that the town was put under a lockdown.

However, the KDCA said it was not possible to determine precisely why such a large number were unvaccinated, as the elderly and people with underlying conditions were not banned from inoculation.

The church opened in the early 1990s and has ever since become larger with communal living facilities of its own.

The religion is not officially registered as a sect, however the ritual act the pastor performs is known as the so called “imposition of hands on eyes”, a practice of poking two eyes to rid of secular desire, Jung youn-seok, a head of cult information resources think tank told Reuters.

“Such act is extremely dangerous and nonbiblical. It is an outright ban in Korean Christianity,” Jung said, adding that the pastor’s mother was a powerful figure and was ousted from Christian community in the 1990s for practicing identical rituals.

Calls to the church from Reuters went unanswered.

The outbreak is a small portion of the national total, but is an example of a cluster with a high concentration of cases.

Shincheonji was a church at the centre of the first major coronavirus epidemic outside China early 2020, with at least 5,227 people linked to its 310,000 followers infected after attending a service in the city of Daegu.

Since then there has been a sharp rise in cases with a fresh daily record of infections on Tuesday.

Looking at the metropolitan Seoul area alone, the situation is critical enough to impose an emergency plan at any time, Prime Minister Kim Boo-kyum told a COVID-19 response meeting on Wednesday.

He called on health authorities to classify the patients accordingly based on the severity of the symptoms and make use of self-treatment options for mild or asymptomatic cases.

Less than 20% were treating themselves at home last week, Kim said.

The Korea Disease Control and Prevention Agency (KDCA) had said the emergency plan may be imposed if and when the nationwide ICU bed capacity surpasses 75% or depending on the risk assessment that reviews medical response shortfalls, surge in number of elderly patients and uptake in booster shots.

Hospitals were treating 586 severe COVID-19 patients as of Tuesday midnight, rapidly filling up limited hospital beds for serious and critical cases. More than 85% of them were aged 60 or above, KDCA data showed.

71% of the ICU beds were filled up nationwide and 83.7% in capital Seoul and neighbouring areas alone, Son Young-rae, a senior health ministry official, told a briefing, stressing ministry efforts to secure more beds with administrative order.

Hundreds were still awaiting for their beds.

Despite the increase in hospitalisation rate, the country’s mortality rate remains relatively low at 0.79%.

South Korea was one of the first countries to record novel coronavirus cases after it emerged in China in late 2019. It has since had 425,065 infections, with 3,363 deaths.

The country has fully vaccinated 79.1% of its 52 million people, while just 4.1% have been given a booster dose.