I have often noted that there will be many cycles of coronavirus infection hitting parts of the globe throughout the year until enough population immunity is built up that the pathogen joins the large family of viruses referred to as “the common cold.”

At present, each surge in cases is met by our media with panic and hysteria. For example, there is a significant rise in the number of cases in Europe. And the American media wants to gin up fear and clicks by “predicting” that this country will be surging soon.

As Europe finds itself at the center of the Covid-19 pandemic once again, experts say it should serve as a warning to the U.S. and other countries about the coronavirus’s unremitting nature.

Case numbers have soared across the continent — more than 50 percent last month — and the worrying trend has continued this month as winter begins to bite.

Surges, for the time being, should be expected. Yet, it appears our press is shocked and surprised. It also plans to taint the holiday season with this nonsense.

It’s a worrying sign for the U.S. ahead of the holiday travel season: coronavirus infections are rising in more than half of all states. Experts warn this could be the start of an extended winter surge.

The rise is a turnaround after cases had steadily declined from mid September to late October. The country is now averaging more than 83,000 cases a day — about a 14% increase compared to a week ago, and 12% more than two weeks ago.

“I hate to say it, but I suspect we’re at the start of a new winter surge,” says Dr. George Rutherford, an epidemiologist at the University of California, San Francisco.

One thing the media is not doing is politicizing the rising case numbers in the Blue States. For example, Vermont is very Democratic, with a significant portion of its population vaccinated. Yet, its case numbers are rising as people head indoors for the winter.

Vermont is one of the most vaccinated states in the country and has served as a model for its COVID-19 response throughout the pandemic. But now, the state is experiencing its worst COVID-19 surge yet, with several factors — including its own success — to blame, officials said.

In Vermont, nearly 72% of residents are fully vaccinated against COVID-19 — more than any other state, according to U.S. Centers for Disease Control and Prevention data. At the same time, it has the 12th-highest rate of new COVID-19 cases over the last week, state data released Tuesday shows.

However, a google search doesn’t reveal the same level of abuse at Vermonters or their governor as Floridians and Gov. Ron DeSantis experienced during the summer surge in the southern states. 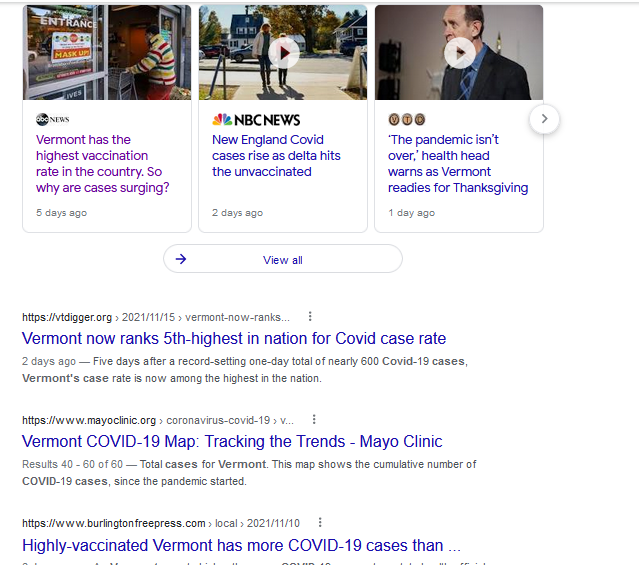 Republican Governor Phil Scott does get some social media snark.

And while countries like Germany and Austria race to impose restrictions on the unvaccinated, the fact is such conditions are doomed to failure. There are significant numbers of breakthrough cases among the vaccinated. Thanks to its probable bat origins, the virus is ubiquitous and can be found in many animal populations.

An AI tool has predicted 540 mammalian species that are most likely to spread covid-19 using information about where they live and aspects of their biology. Therefore, the virus is here to stay, in all its wonderful variations. Any action to try and change the cyclic course is merely delaying the inevitable, as South Korea is now finding out.

The country reported 3,187 new COVID cases on Wednesday, the second-highest daily total since the start of the pandemic. Officials also reported that 522 COVID patients are hospitalized with moderate to severe symptoms.

The SARS-Cov-2 virus causes respiratory illness, usually mild to moderate, in most individuals. People most at risk from severe illness or death have preexisting conditions, are elderly, and/or are obese. This disease isn’t the bubonic plague, smallpox, or even on par with the Spanish Flu (which hit young adults hard).

At this point, the best Christmas gift our public health community could give us is accepting that the policies aren’t working and focusing on the rapid development of early treatment with effective therapeutics. Natural immunity is real…and it is spectacular.

The best present our media could give us is to ditch the panic and promote the development and early use of treatments. Let me help our press by starting.

A monoclonal antibody Covid treatment from Vir Biotechnology and GlaxoSmithKline “stands up well” to all variants of the virus, Vir President and CEO George Scangos told CNBC’s “Power Lunch” on Wednesday.

…The antibody is administered intravenously, developed to target Covid’s spike protein and prevent it from attaching to and penetrating human cells, according to the FDA.

“It certainly is an effective antibody against Covid, but also against SARS, also against many other coronaviruses,” Scangos said. “So not only, I think, do we have an antibody that stands up well to all the variants received from Covid, but potentially can help in future coronavirus pandemics as well.”

Donations tax deductible
to the full extent allowed by law.