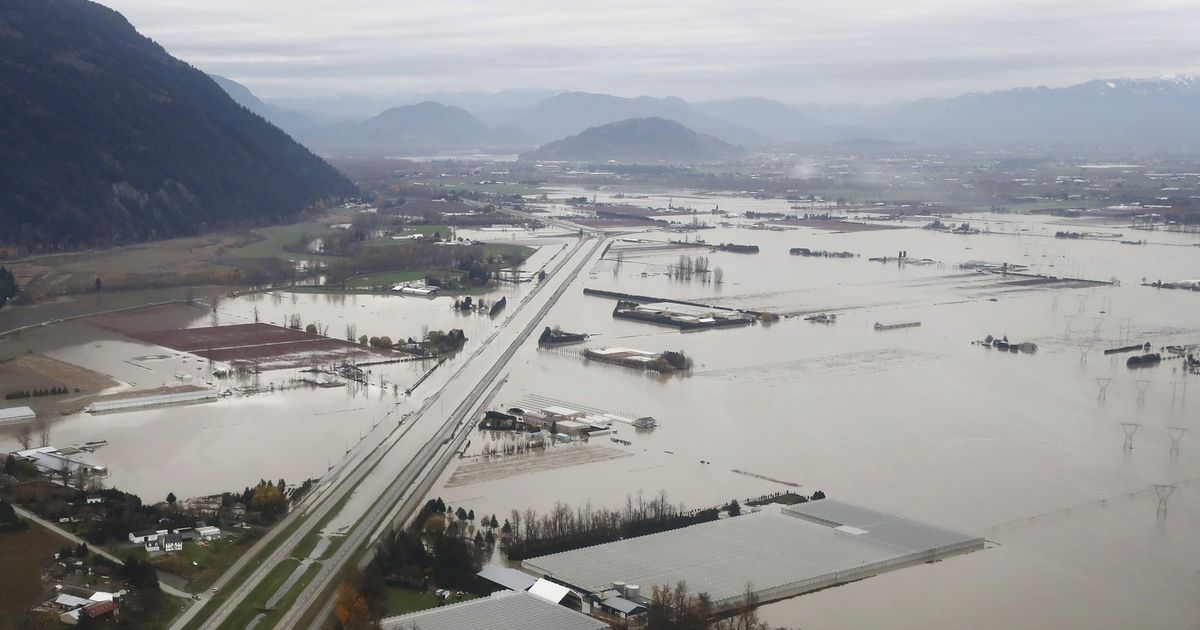 It’s been barely a week since devastating flooding accompanied an atmospheric river that lashed parts of British Columbia, isolating the city of Vancouver as landslides and washouts made roadways impassible. The deluge dumped double-digit rain totals in southwestern Canada, and the resulting flooding displaced thousands of people.

Severe flooding also occurred in northwest Washington state, with heavy rainfall contributing to one-month totals of up to 40 inches in the mountains.

Now, another atmospheric river is set to unleash additional heavy rains and flooding in the already-waterlogged area starting Wednesday, preceding a second event that will begin late Friday and continue into the weekend.

The next downpours are expected to arrive with some roads in British Columbia still closed and just as some displaced residents return home.

Tyler Hamilton, a meteorologist for the Weather Network, a cable weather channel in Canada, called computer model precipitation forecasts for British Columbia “disconcerting,” writing in a tweet that incoming moisture would solidify “one of the wettest Novembers in recorded history.”

Predicted precipitation in Washington state is likely to be less intense but still potentially problematic.

“Given we’ve been so damp and potentially we’ll see another system affecting similar areas Saturday and Sunday, there could be issues,” said Jacob DeFlitch, a meteorologist at the National Weather Service in Seattle.

The Weather Service in Seattle wrote in a discussion that some rivers from King County northward could experience flooding Thursday night into Friday and again Saturday.

Steering the atmospheric river will be an area of low pressure over the northern Aleutians and a zone of high pressure parked over the Oregon coastline. A strip of moisture will be entrained by the atmospheric squeeze play, since lows spin counterclockwise and highs rotate clockwise. That narrow but intense plume of moisture will originate as much as 2,500 miles away in the tropics south of Hawaii. Meteorologists refer to that sort of atmospheric river as the “Pineapple Express.”

The bulk of the impacts will be concentrated in British Columbia, where the atmospheric river could reach a level 4 out of 5 on the Center for Western Weather and Water Extremes’ scale. In Washington state, only a level 2 event is expected. The rating is assigned on the basis of predicted integrated vapor transport, a measure of how much moisture is flowing in the atmospheric river.

At any one time, Wednesday’s atmospheric river could truck 1,650 pounds of water northeast over every one-meter cross-section of atmosphere.

We are bracing for what will end up being probably a record-breaking fall in terms of overall precipitation numbers for many communities along the central and south coast” of British Columbia.
— Armel Castellan, a meteorologist with Environment Canada, the country’s weather service

“We are bracing for what will end up being probably a record-breaking fall in terms of overall precipitation numbers for many communities along the central and south coast,” said Armel Castellan, a meteorologist with Environment Canada, the country’s weather service, in a video posted to social media.

The first atmospheric river will arrive in British Columbia late Wednesday, the moisture stream forced up into the mountains, where it will condense and form moderate-to-heavy downpours. Atmospheric rivers transport most of their moisture a mile or two above the surface, meaning the most significant precipitation usually falls in the mountains.

Rainfall rates of a quarter to a third of an inch per hour are likely in the lowlands, with rates topping a half-inch per hour in the higher terrain on Vancouver Island. Environment Canada is projecting 1.5 to 3 inches of rainfall for metro Vancouver.

“The next storm system is set to arrive on the [British Columbia] South Coast overnight Wednesday and … will be shorter lived and less intense than [the previous event],” Environment Canada wrote, but “may worsen recent flooding and impact vulnerable landscapes and infrastructure.”

Rainfall will dip south into Washington by sunrise Thursday before the atmospheric river sags into Oregon and withers. Roughly 2 to 3 inches of rain is likely on the summits of the Washington Coastal Range, with an inch or two of moisture in the Cascades and a half-inch to an inch in Seattle.

Pockets of snow were falling in the Cascades on Tuesday morning, where winter weather advisories were in effect. The atmospheric river will largely disintegrate by late Friday, never really reaching the southwest coast of Oregon.

A more significant atmospheric river will blast British Columbia over the weekend into early Monday, with the heaviest precipitation concentrated in the mountains. Totals there could top 10 inches by Tuesday and perhaps even approach 20 inches. In Washington, the heftiest totals will skirt north, but 4 to 6 inches is a safe bet in the mountains in the next seven days.

The back-to-back atmospheric rivers are the latest that have been buffeting the broader region.

“This is our active period, and November is our rainiest month,” said DeFlitch. “The last [atmospheric river] we had was obviously on the extreme side, but we usually do see them even into December. This is just kind of an extra-active stretch.”

Castellan said British Columbia can get 20 or even 30 atmospheric river events from mid-October into the spring during active periods. But “it is fairly extraordinary to have seen this many” so early in the year, he said.

Because of the saturated soils, it will be easier for even modest winds in the atmospheric river to topple trees and power lines, as well as for mudslides to occur.

“Even breezy winds we’re looking at with gusts of 30 to 40 mph could bring down the power lines,” DeFlitch said.

In the meantime, a continued wet and active pattern is looking likely for at least another several weeks.

With climate change, Castellan said, “we are going to see stronger atmospheric rivers on our coasts, and I think we need to be very much prepared for that signal to be amplified.”