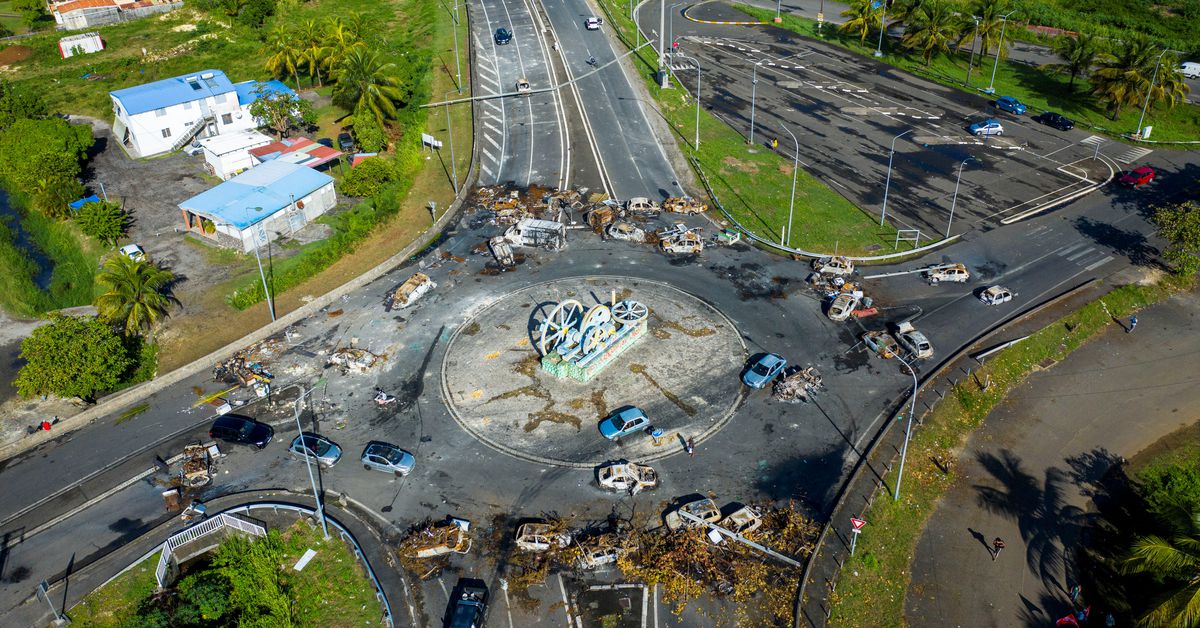 PARIS, Nov 23 (Reuters) – Gunshots were fired overnight at police in the French Caribbean island of Martinique, local authorities said on Tuesday, in a sign that unrest triggered by COVID-19 curbs that has rocked the nearby island of Guadeloupe could be spreading there.

No police have been injured and things have calmed down in the daytime, a Martinique police official said, but traffic was still slowed by barricades.

Gunfire has also targeted police over the past few days in Guadeloupe, where a general strike entered a second week on Monday and many stores remained shuttered after night-time looting amid protests over the COVID-19 restrictions.

An aerial view of a barricade of burned cars and debris on a round-about blocking the traffic on highway N1 after violent demonstrations which broke out over COVID-19 protocols, in Petit-Bourg, Guadeloupe, November 23, 2021. REUTERS/Ricardo Arduengo

“There are still scenes of extreme violence with police forces being shot at with real ammunition,” he said, adding that some 200 additional police officers deployed since Sunday had helped to quell some of the unrest.

People in Guadeloupe and Martinique have been especially incensed by a requirement, also in force in mainland France, for all healthcare workers to be vaccinated against COVID-19.

Compulsory vaccination has touched a nerve in a population that is descended from slaves who worked on French sugar plantations. During the 20th century, many people on Guadeloupe were also systematically exposed to toxic pesticides used in banana plantations. read more

A general strike also began in Martinique on Monday to demand an end to the mandatory vaccination of health workers and for action to tackle high fuel prices.

The Caribbean has been hit this autumn by a new wave of coronavirus infections that is causing lockdowns and flight cancellations and overwhelming hospitals, just as tourism was beginning to show signs of recovery. read more