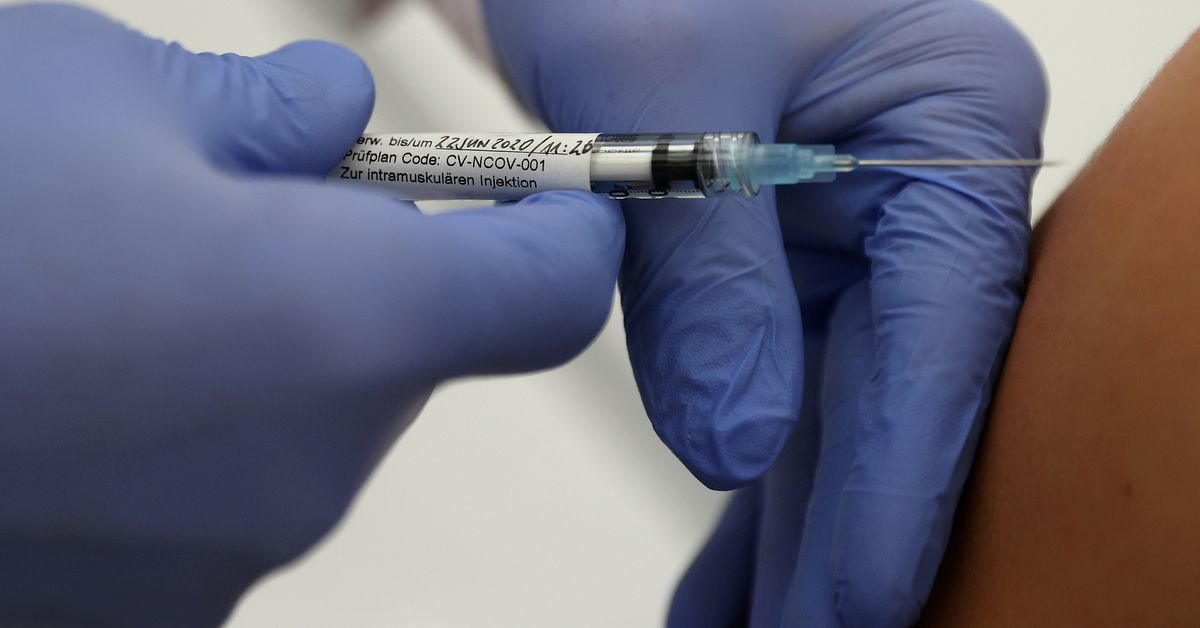 Professor Gottfried Kremsner injects a vaccination against the coronavirus disease (COVID-19) from German biotechnology company CureVac to a volunteer at the start of a clinical test series at his tropical institute of the university clinic in Tuebingen, Germany, June 22, 2020. REUTERS/Kai Pfaffenbach

BRUSSELS, Nov 24 (Reuters) – The head of the European Union’s public health agency Andrea Ammon said on Wednesday that COVID-19 vaccine boosters should be considered for all adults, with priority for those above 40 years, in a major change to the agency’s guidance.

Recommendations issued by the European Centre for Disease prevention and Control (ECDC) are not binding on EU governments but are used to make health policy decisions.

“Booster doses should be considered for all adult individuals prioritising persons above 40 years of age,” Ammon said in a recorded statement, noting that boosters should be administered at least six months after completing the primary vaccine schedule.

In its previous guidance issued in September alongside the European Medicines Agency (EMA), the ECDC said there was no urgent need for the administration of booster doses to fully vaccinated individuals in the general population, but suggested that additional doses should be considered for people with weakened immune systems and could be used as a precaution for older frail individuals.

“Available evidence emerging from Israel and the UK shows a significant increase in protection against infection and severe disease following a booster dose in all age groups in the short term,” the ECDC said in a report published on Wednesday.

It advised giving boosters to all adults with priority “for those aged 40 years and over”.

Ammon said that boosters will increase protection against infections caused by waning immunity and “could potentially reduce the transmission in the population and prevent additional hospitalisations and deaths”.

She advised countries with low levels of vaccinations to speed up their rollouts and warned of high risks of a further spike in deaths and hospitalisations in Europe in December and January if the recommended measures were not introduced.

The European Commission is expected to take the advice on boosters into consideration when proposing changes to the use of COVID-19 certificates later this week, officials said.

“Boosters should be available for adults, with priority for people over 40 and vulnerable people,” the head of the European Commission, Ursula von der Leyen, said on Twitter after the ECDC’s report was published.

Many EU countries have already begun giving booster doses to their populations but are using different criteria to select groups that are prioritised and using different intervals between primary vaccinations and boosters.

Austria, which has this week reintroduced a lockdown amid a spike in cases, has decided to give boosters after four months, whereas in Italy the additional dose can be administered after five months.

The ECDC also recommended countries apply minor restrictive measures, such as the use of face masks where physical distance is not possible and teleworking.

It said that travel restrictions were unlikely to have a significant impact because the virus is already present in all EU countries.

It also said that there was limited evidence of decreased transmission caused by the use of COVID-19 certificates to access restaurants, cinemas or museums – measures that about 20 EU countries are currently applying.

Sorgente articolo:
In major shift, EU says vaccine boosters should be considered for all adults – Reuters