RABAT, Morocco — Defense Minister Benny Gantz signed a memorandum of understanding with his Moroccan counterpart on Wednesday, the first such agreement between Israel and an Arab state ever, Israeli officials said.

The agreement formalized the defense ties between the two countries, allowing for smoother cooperation between their defense establishments and making it easier for Israel to sell arms to the North African kingdom.

With the signing of the MOU, the two countries’ defense ministries and militaries can more easily speak with one another and share intelligence, whereas in the past, such communication was only possible through their respective intelligence services.

“It will allow the beginning of official security cooperation between the two [countries]. The agreement includes formalizing intelligence-sharing and will allow for ties between their defense industries, defense procurement and joint exercises,” the Defense Ministry said.

A Defense Ministry official said that while Israel maintains close security ties with Jordan and Egypt, which which it also has peace deals, it does not have memoranda of understanding with them, making the deal with Morocco “unprecedented.”

“We have just now signed an agreement for military cooperation — with all that that implies — with the nation of Morocco. This is a highly significant event that will allow us to enter into joint projects and allow Israeli [defense] exports to here. I think the ties between Morocco and Israel need to continue to get closer, to continue to develop and expand, and I am glad that we have a part to play in that,” Gantz said after the signing. 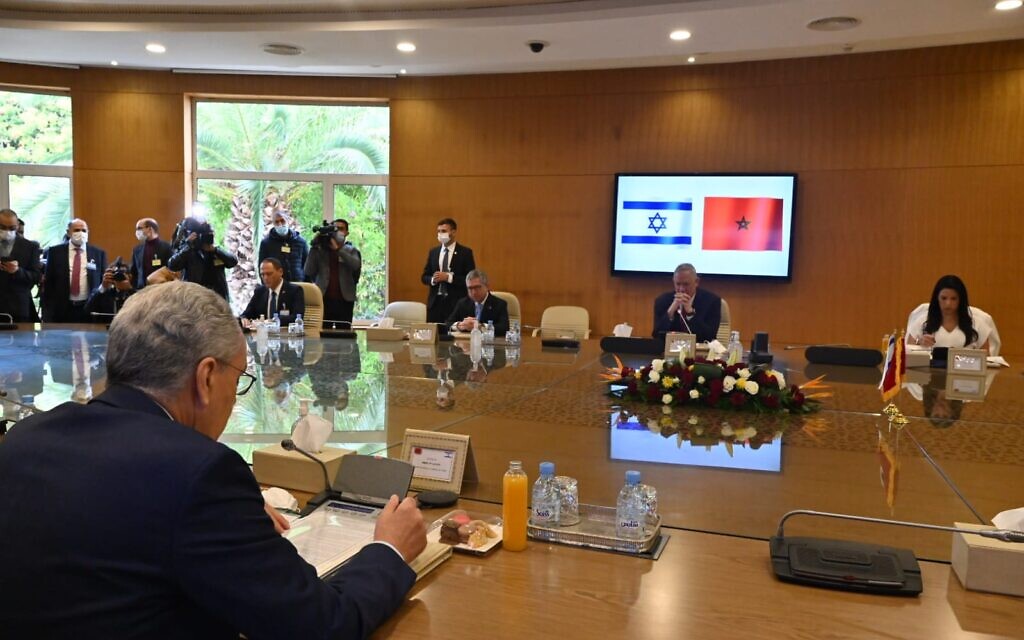 Gantz touched down in the Moroccan capital on Tuesday night for the first official visit by an Israeli defense minister to the country, after the two normalized ties last year.

The defense minister kicked off his trip Wednesday with a visit to the Tomb of Muhammad V and Hassan II, the grandfather and father of the current king, Muhammad VI, respectively. At the site, Gantz laid wreaths on the deceased monarchs’ graves.

From there, he traveled to Morocco’s Defense Ministry, meeting his counterpart, Abdellatif Loudiyi, to sign the MOUs. 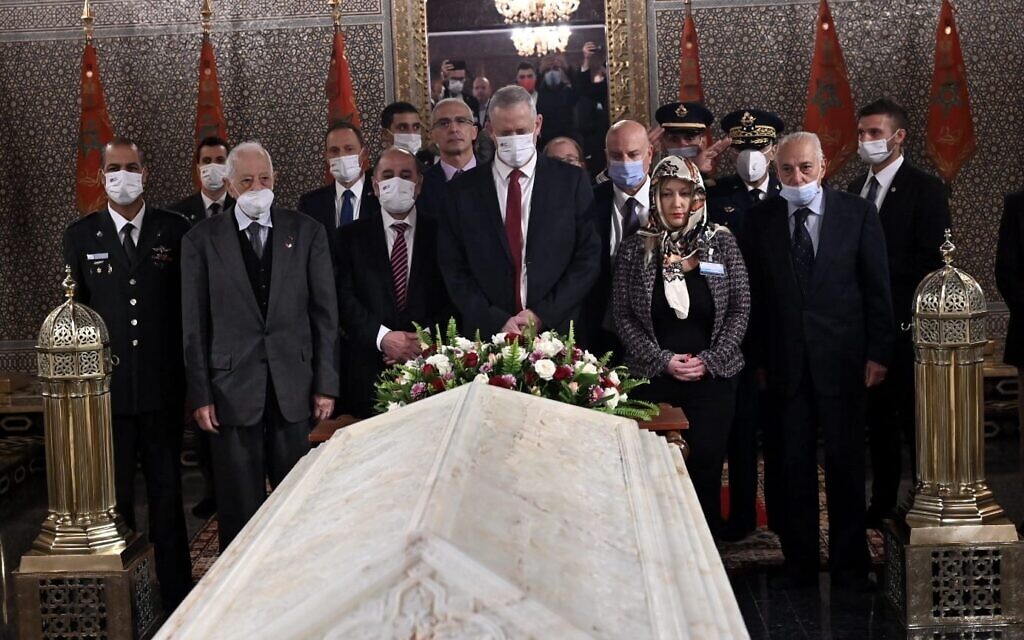 Ahead of the trip, which he described as “historic,” Gantz said the goal was strengthening ties between Jerusalem and Rabat, which resumed diplomatic relations last year as part of then-US president Donald Trump’s so-called Abraham Accords. As part of the agreement, Washington recognized Moroccan sovereignty over the disputed territory of Western Sahara. Under the Abraham Accords, Israel also normalized ties with the United Arab Emirates and Bahrain and, in principle, with Sudan, though that country’s turbulent political situation has made it difficult for the two to sign a formal agreement.

For Morocco, the visit by Israel’s defense minister — whose office can approve the sale of advanced Israeli weaponry and defense systems — likely serves as a signal of strength to its neighbor Algeria, with which it’s been feuding over its support for the Polisario Front movement, which calls for an independent state in the Western Sahara.

In addition to Gantz’s trip representing the first official visit by a defense minister, this was the first time that Israel Defense Forces soldiers in uniform have visited Morocco. Three IDF officers from the minister’s office were in the delegation, two of whom were of Moroccan extraction — the minister’s military secretary, Brig. Gen. Yaki Dolf, both of whose parents were born in Morocco, and Col. Noam Arbeli, whose mother was born in Morocco and moved to Israel in 1961. Some 700,000 Israelis are estimated to have Moroccan roots. 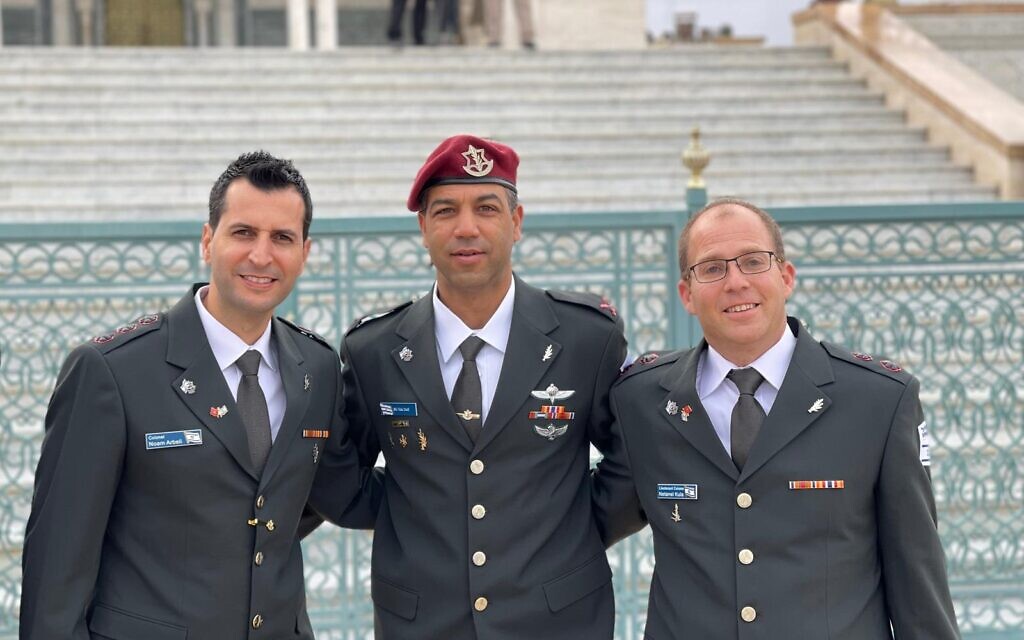 Later on Wednesday, Gantz was also due to meet with Moroccan armed forces chief Abdelfattah Louarak and Foreign Minister Nasser Bourita. On Thursday, the defense minister was scheduled to visit the Talmud Torah synagogue in Rabat before taking off for Israel on Thursday evening.

It will be the second state visit by an Israeli elected official.

Since last year, after the two countries normalized ties, Jerusalem and Rabat have signed a number of memoranda of understanding on issues including civil aviation, petroleum drilling, water resource research and finance. The two countries also reopened their respective liaison offices, which had been shuttered after Morocco halted ties with Israel at the outset of the Second Intifada in 2000.

Foreign Minister Yair Lapid visited Morocco in August to officially open the Israeli Liaison Office in Rabat, as well as meet with officials and sign a series of agreements. The two countries plan to eventually convert these liaison offices into full embassies, though no specific date for that has been set.