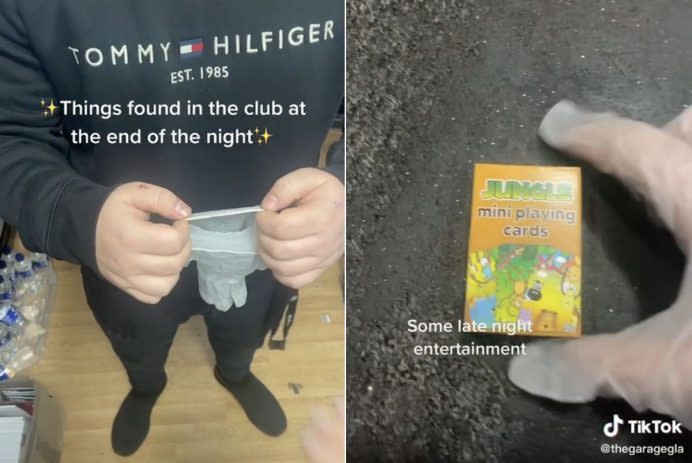 A nightclub worker is going viral on TikTok after sharing some of the items they’ve found while cleaning the club.

The video comes from the official TikTok account for The Garage Glasgow (@thegaragegla), a nightclub and concert venue in Glasgow, Scotland.

No shade, but it’s time to stop mooching off your parents’ Amazon Prime — here’s why

It’s just the latest viral video to explore the surprising ins and outs of a very specific job. In the past, TikTok users have shown what it’s like to work as a tollbooth operator, how airport ground crews help planes reach their gates and why Google employees get the “best” office perks.

The Garage’s clip, which has nearly 8 million views, begins with an employee putting on a pair of latex gloves.

“Things found in the club at the end of the night,” the post’s caption reads.

From there, the employee proceeds to pick up a wide variety of random items. Some of them are what you might expect — phone chargers, passports, jewelry and, tragically, a smashed-up iPhone.

But the other discoveries are a bit more bizarre. The employee also picks up a miniature deck of playing cards, a men’s puffer vest and a single woman’s boot.

This simple pastry dish will be your go-to all holiday season:

TikTok commenters were fascinated by the clip. In particular, many were confused as to how someone could lose a shoe at a nightclub.

“How do you lose ONE shoe?” one user asked.

“Who leaves the club with one shoe on?” another wrote.

Other users simply enjoyed the content. Many suggested The Garage turn its viral TikTok into a full-on series.

“Genius idea for a series,” one user wrote.

“I actually thought this would be worse,” another commented.

From animal print to florals: Are these funky new sneaker releases worth the investment?

In The Know is now available on Apple News — follow us here!

If you enjoyed this story, read more about how a 30th wedding anniversary went wrong.

More from In The Know:

‘Groomzilla’ sparks backlash with unusual wedding entrance: ‘I would be so upset’

The post Nightclub worker reveals the strangest items they find while cleaning the club appeared first on In The Know.

Sorgente articolo:
Nightclub worker reveals the strangest items they find while cleaning up the club: ‘How do you lose one shoe?’ – Yahoo Lifestyle