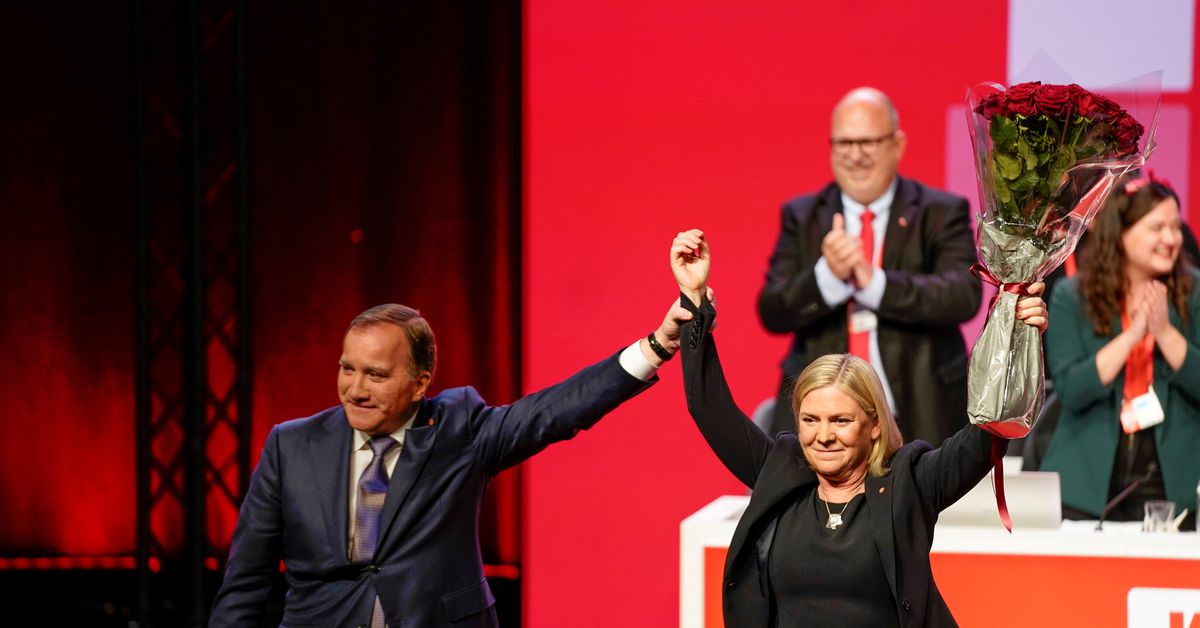 Sweden’s Minister of Finance Magdalena Andersson is congratulated by Prime Minister Stefan Lofven, after she was elected as party leader of the Social Democratic Party, at the party’s congress, in Gothenburg, Sweden, November 4, 2021. Bjorn Larsson Rosvall/ TT News Agency/via REUTERS

STOCKHOLM, Nov 23 (Reuters) – Social Democrat party leader Magdalena Andersson looks set to become Sweden’s first female prime minister after the government and the Left Party reached a deal that will see the former communists back her in a confirmation vote in parliament.

The confirmation vote will be held on Wedesday.

Andersson took over as leader of the Social Democrats from outgoing prime minister Stefan Lofven earlier this month, but needs support from outside the ruling minority coalition with the Greens to be confirmed as his successor.

Left Party leader Nooshi Dadogostar said she had agreed to back Andersson as PM and the government’s budget – which parliament will vote on later on Wednesday – after reaching a deal on higher pensions and health insurance.

“First we are going to vote for our own budget, but in the second round, we will vote for the government’s budget because we consider that we have managed to get in a lot of improvements in sickness insurance,” Dadgostar told Swedish television.

The Centre Party has already said it will not block Andersson’s path to the premiership and support from the Left should tip the scales in the current finance minister’s favour in the confirmation vote.

Long-serving PM Stefan Lofven stepped down this month to give Andersson a chance boost support for the party ahead of a general election due in September next year. read more

Even if Andersson is confirmed as prime minister on Wednesday it is not certain parliament will back the budget.

The Centre Party, whose support the government needs for its bill to pass, has not said how it will vote.