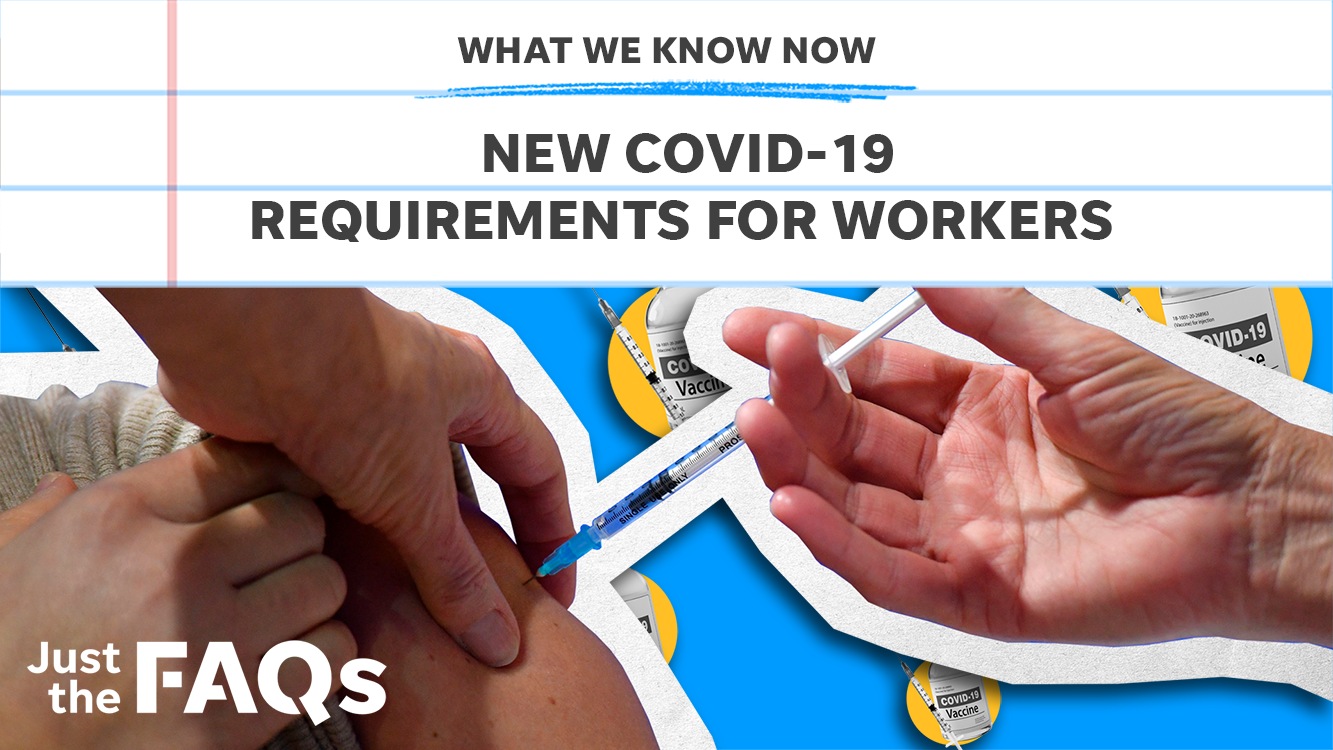 Workers at larger businesses will have to get vaccinated against COVID-19 by Jan. 4, 2022 or face regular testing under new federal rules.

Thousands of people traveling for the holidays this week will first test themselves for COVID-19 without a doctor, lab or any medical oversight.

While these quick home tests are hailed as a major convenience and a smart way to protect loved ones, they’ve also raised a significant challenge for public health officials. How can agencies comprehensively track cases and trends when many consumers don’t report home test results?

Federal and state health officials have worked since March 2020 to build capacity to test, report and keep tabs on COVID-19 cases. Public health officials say reporting cases is critical for spotting trends and detecting surges so hotspot communities can lessen risk and prepare hospitals for a rush of people seeking care.

“The whole issue of us tracking every single case is just not going to be possible anymore with these (home) tests,” said Marcus Plescia, chief medical officer of the Association of State and Territorial Health Officials. “We need to move to a different approach.”

Centers for Disease Control and Prevention officials acknowledge the agency is unable to track home test results. The CDC is working with testing companies to make it convenient for consumers to voluntarily report results, either through an app or website, but “the amount of data that have flowed as a result of these efforts (is) a tiny fraction of all COVID-19 testing data,” a spokeswoman said.

Antigen-based home tests are becoming increasingly popular because they don’t require a prescription and can be bought at retail stores or online. Private companies that sell direct-to-consumer tests produce tens of millions of these rapid tests and ramped up production as demand soared and shortages emerged due to the delta variant. The Biden administration is spending nearly $2 billion to procure more than 280 million kits for vulnerable populations and announced that retailers Amazon, Kroger and Walmart will sell kits at a discount of up to 35% from retail prices.

Many employers now require routine testing for workers returning to the office, and international travelers returning to the U.S. must show proof of a negative test before boarding a flight. The Biden administration is pursuing a mandate that requires private employers with more than 100 workers to mandate staffers vaccinate or test weekly. A federal appeals court blocked the mandate from taking effect, but the Biden administration on Tuesday asked the court to lift the order and reinstate the policy.

As a result of this increased production, the nation has the capacity to make up to 141 million antigen home tests this month, a total that could reach 242 million next month, according to an analysis by Arizona State University professor Mara Aspinall. Her team’s research tracks the market through interviews with testing companies and by analyzing reports.

That capacity exceeds the number of PCR tests performed by labs, doctors or other medical settings. The two types of tests use different technology. Antigen tests detect proteins found on the surface of the coronavirus. PCR tests detect a virus’ genetic material and are often completed in a lab, though some rapid non-lab versions are available too.

“The vast majority are not reported,” Aspinall said of the home tests. “We have to be realistic about what we know and what we don’t know.”

Abbott Laboratories markets the most widely sold home test, called the BinaxNOW COVID-19 self test. The company sought and received FDA authorization to pair the home test with a mobile app to allow people to report test results. The app is already used on different versions of the test administered by health providers.

“The ability for people to more easily self-report BinaxNow test results will allow communities as well as organizations, such as schools and workplaces using self tests, to quickly detect rising COVID-19 cases or potential outbreaks enabling fast and informed decisions on safety measures,” a spokeswoman said.

Quidel, which makes the QuickVue home test, said its top priority has been to ramp up production and shipments so consumers can access the test. Instructions included with the test advise consumers who test positive to seek care from a health provider.

“Physicians are in the best position to facilitate reporting to the appropriate public health authorities,” CEO Doug Bryant said.

More recently, the FDA has authorized a handful of tests from companies that promise to make massive quantities. Sunnyvale, California-based iHealth Labs Inc. said it will have the wherewithal to distribute up to 100 million two-test kits within two months, if demand warrants.

The company is testing a mobile app that will be paired with its test, said Jack Feng, iHealth Labs’ chief operating officer. He said the app, which will allow customers to report test results to public health entities, will be available within three months.

The company sells the two-test kit for $13.98 via its website, ihealthlabs.com. Feng said he expects to sell the test to businesses, schools and other customers that will buy the kits in bulk purchases, but the company also sells tests to consumers, first via Amazon and later at yet-to-be-named retailers.

“We want to make sure this product is available to every American,” Feng said.

Other test vendors are trying to thread the needle of making 15-minute tests convenient while also providing medical oversight.

The telehealth provider eMed ships the BinaxNow home test to a customer’s home. When the person is ready to test, the customer remotely connects with an eMed guide via a mobile app. The eMed rep instructs the user how to take a proper nasal sample, complete the test and read the results. Consumers with negative test results get a certificate to meet requirements of airlines or workplaces. Positive cases are reported to public health agencies.

“We need validated testing and we need reporting to state local health officials, so they can have actual data to track an outbreak,” said Patrice Harris, eMed’s CEO.

Communities have relied on public health agencies to track cases since the beginning of the pandemic. Such close monitoring can give early warnings to hospitals about surges that might require extra resources, experts say.

“This virus is still killing people. It still hospitalizes people for weeks on end in ICUs, sopping up a lot of resources that we used to use for other patients,” said Emily Volk, president of the College of American Pathologists. “So we’re going to have to continue to keep track of the impact of this virus on our communities.”

Even with the growing popularity of home tests, Volk said tests administered by doctors and other sites will still play a critical role. Those who are sick enough to seek care at a doctor’s office or a hospital will likely get tested there, and those cases will be reported to and tracked by public health agencies.

And even some people who are confused by home test results might seek the reassurance of a test administered by a health provider.

Others say widespread use of home testing could benefit public health even if all cases aren’t tracked. People without symptoms might test themselves before visiting family members over the holidays. If they test positive and isolate themselves, it could prevent new cases.

The home tests deliver immediate results, unlike a lab test that can take a day or two, or even longer during busy periods.

“There’s enormous potential value in giving people the opportunity to test themselves,” said Jennifer Nuzzo, an epidemiologist and senior scholar at the Johns Hopkins Center for Health Security.

But Nuzzo said one drawback is home tests are unaffordable for many people. The non-discounted versions cost $25 to $30 at some retailers. European nations have deployed these tests more aggressively. In England, consumers can order free tests from the government.

“Even if we want to collect those test results, those people who are testing themselves at home, who are taking action to protect themselves and their families by using these tests, are basically the people who can afford to do so – that’s not a lot,” Nuzzo said.

Plescia, of the Association of State and Territorial Health Officials, said it’s important to acknowledge not all cases are being counted.

Public health officials also must be confident that there’s a new social norm among people with COVID-like symptoms, Plescia said.

“It would be hard to believe anyone who has COVID-like symptoms and tests positive isn’t aware of what they’re supposed to do now, which is isolate and take precautions so they don’t infect other people,” Plescia said.