Defense Minister Benny Gantz on Thursday revealed that Moroccan King Mohammed VI helped arrange a private flight to transport the remains of a French rabbi who died in the country last week to Israel for burial, writing about the incident in an op-ed published by two local outlets on Thursday.

Last week, Rabbi Abraham Elhadad, 82, a prominent leader in Sarcelles, outside of Paris, fell and hit his head during a visit to Tangiers, where he was born.

“Upon learning of this horrific accident, His Majesty, King Mohammed VI and his advisors reached out to the family and arranged a private aircraft to fly Rabbi Elhadad to be buried in Israel in a religious ritual. There was no press, no fanfare. His Majesty the King recognized that there is no greater ‘mitzvah’ or holy act, than to tend for the deceased and to bury them in accordance with Jewish tradition at the earliest possible time,” Gantz wrote in his article.

In the op-ed, which was published in French in Morocco’s L’Observateur magazine and in Arabic in Ahdath Maghrebia, the defense minister hailed Morocco for protecting its Jews during the Holocaust, while conspicuously avoiding reference to the domestic pressure that led to the mass exodus of Moroccan Jews in the years that followed.

“In history’s darkest hour, the Nazi regime tested the tolerance of the world. Millions of Jews were rounded up, marked like cattle and sent to their deaths in concentration camps across Europe. My own mother and father fell victim to the horrors of the Nazis. It is during this time that His Majesty King Mohammed V said, ‘There are no Jews in Morocco. There are only Moroccan subjects,’” Gantz wrote.

In his op-ed, the defense minister was effusive about Israel’s growing ties with Arab countries, comparing the situation to Israel’s first peace deal, with Egypt. 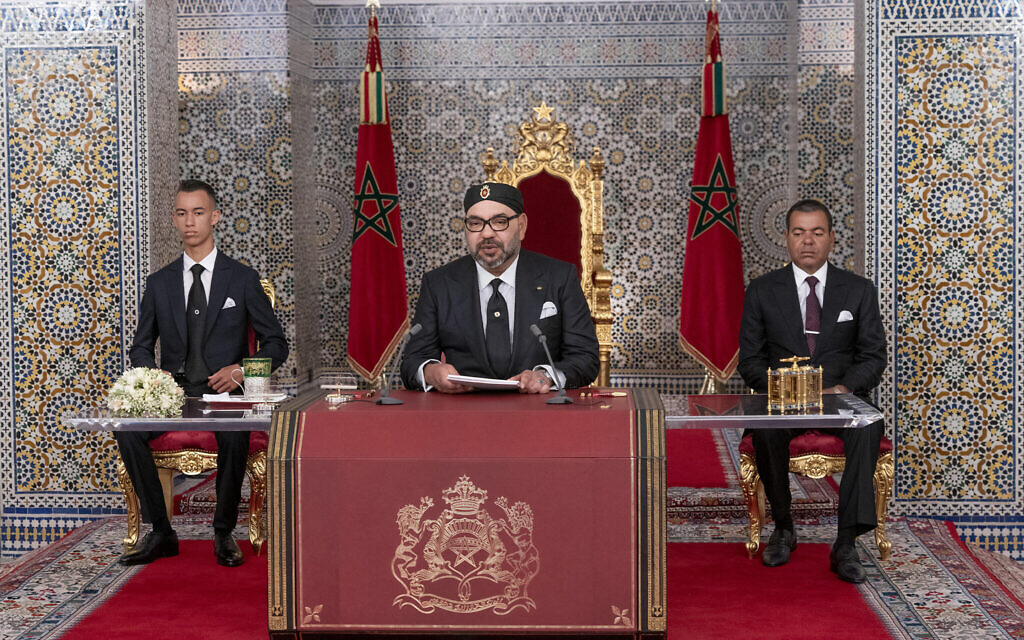 In this photo provided by the Moroccan News Agency (MAP), Morocco’s King Mohammed VI, center, accompanied by his son Crown Prince Moulay Hassan, left, and brother Prince Moulay Rashid addresses the Nation in a speech aired on TV, at the Royal Palace in Tetouan, Morocco, on Monday July 29, 2019. (Moroccan Royal Palace via AP)

“We could all feel the winds of change in the region. In fact, I have not witnessed such optimism since my first operational mission in the IDF, securing Egyptian President Sadat’s convoy during his first historic visit to Israel in 1977,” Gantz wrote.

“Considering the recent positive developments, I am confident that we will work with our Moroccan friends, and with the leadership of our great ally the United States, to strengthen Israel’s relations with Jordan, Egypt, the members of the Abraham Accords, new partners in the region as well as with our Palestinian neighbors,” he said.

On Gantz’s trip, the first official visit to Morocco by an Israeli defense minister, he and his counterpart signed a memorandum of understanding, outlining the security-related areas in which the two countries can cooperate. The agreement primarily established the mechanisms through which Israeli and Moroccan security organizations can communicate and cooperate, allowing for greater intelligence sharing, weapons sales and potentially joint exercises.

“The MOU establishes a framework from which we can develop cooperation in counterterrorism, intelligence-sharing, military training, professional working groups and industrial collaboration. More importantly, this agreement acknowledges our shared vision of peace and stability for our people, for the region, for the world,” Gantz wrote.