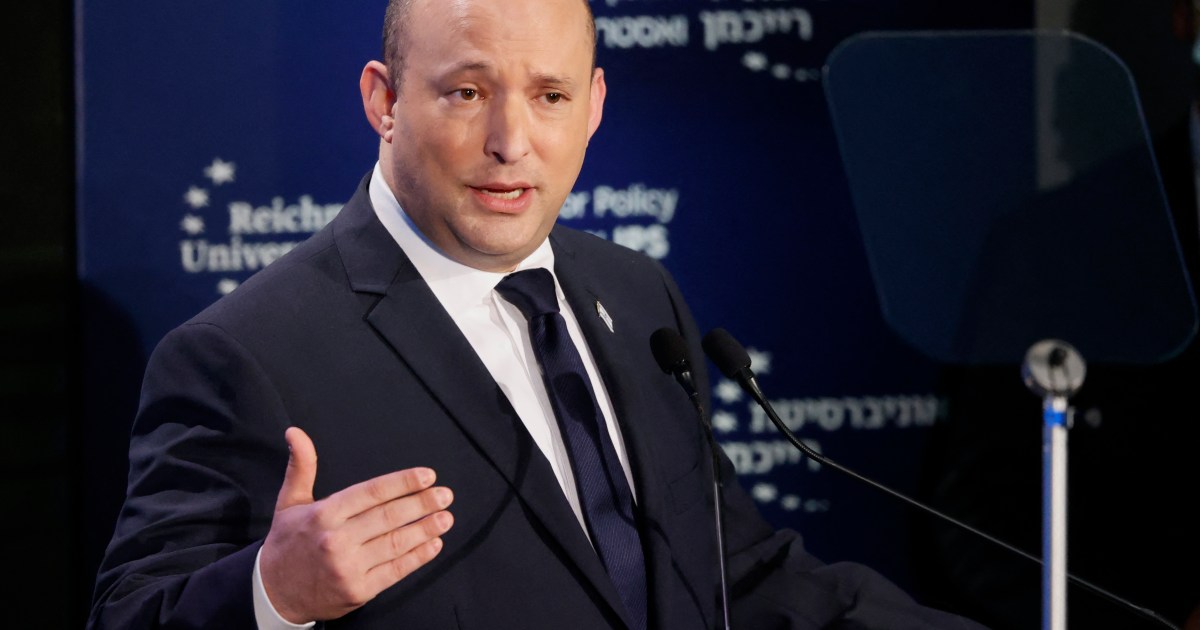 PM Bennett says Iran is at ‘the most advanced stage of its nuclear programme’ while condemning efforts to revive the nuclear deal.

Prime Minister Naftali Bennett has signalled a readiness to step up Israel’s confrontation with Iran, reiterating on Tuesday, his country would not be bound by any new Iranian nuclear deal with world powers.

Indirect negotiations will begin on November 29 on reviving the 2015 accord, which former United States President Donald Trump withdrew from, deeming it insufficient to shut down projects with bomb-making potential – a view shared by the Israelis.

Iran, which denies seeking nuclear arms, has since the US walkout breached the deal with expanded uranium enrichment.

Bennett, who took power in June, described Iran in a speech as being at “the most advanced stage of its nuclear programme”.

While his government has previously said it would be open to a new nuclear deal with tougher restrictions on Iran, Bennett reasserted Israel’s autonomy to take action against its arch foe.

“We face complicated times. It is possible that there will be disputes with the best of our friends,” he told a televised conference hosted by Reichman University.

“In any event, even if there is a return to a deal, Israel is of course not a party to the deal and Israel is not obligated by the deal.”

Bennett voiced frustration with what he described as Israel’s smaller-scale clashes with Iran’s militia allies.

“The Iranians have encircled the State of Israel with missiles while they sit safely in Tehran,” he said.

“To chase the terrorist du jour sent by the [Iranian covert] Quds Force does not pay off any more. We must go for the dispatcher.”

Stopping short of explicitly threatening war, Bennett said cyber-technologies and what he deemed Israel’s advantages as a democracy and international support could be brought to bear.

“Iran is much more vulnerable than is commonly thought,” he said.

Israel also sharpened its rhetoric against Iranian combat drones on Tuesday, disclosing what it said were two bases used to carry out maritime attacks with the remote-controlled planes and offering to cooperate with Arab partners on counter-measures.

Gulf Arab countries share Israeli concerns about such drones, seeing the hand of Iran or its allies in aerial attacks on shipping or on energy facilities in Saudi Arabia. Tehran has often denied such allegations.

“Today I reveal to you two central bases in the area of Chabahar and Qeshm island in south Iran, from which operations in the maritime arena were launched, and where today, too, advanced Shahed attack drones are deployed,” Israeli Defence Minister Benny Gantz told a televised security conference.

Separately, the chief of Israel’s air force proposed working with Arab partners – such as the United Arab Emirates and Bahrain, with which Israel formalised ties last year – against the drone threat.

“It think that this is a great opportunity to create contacts and to build a defence plan for all the countries that have a common interest in protecting themselves,” Major-General Amikam Norkin told the conference, hosted by Reichman University.

“We can help significantly [against drones], whether in terms of intelligence, detection or interception.”