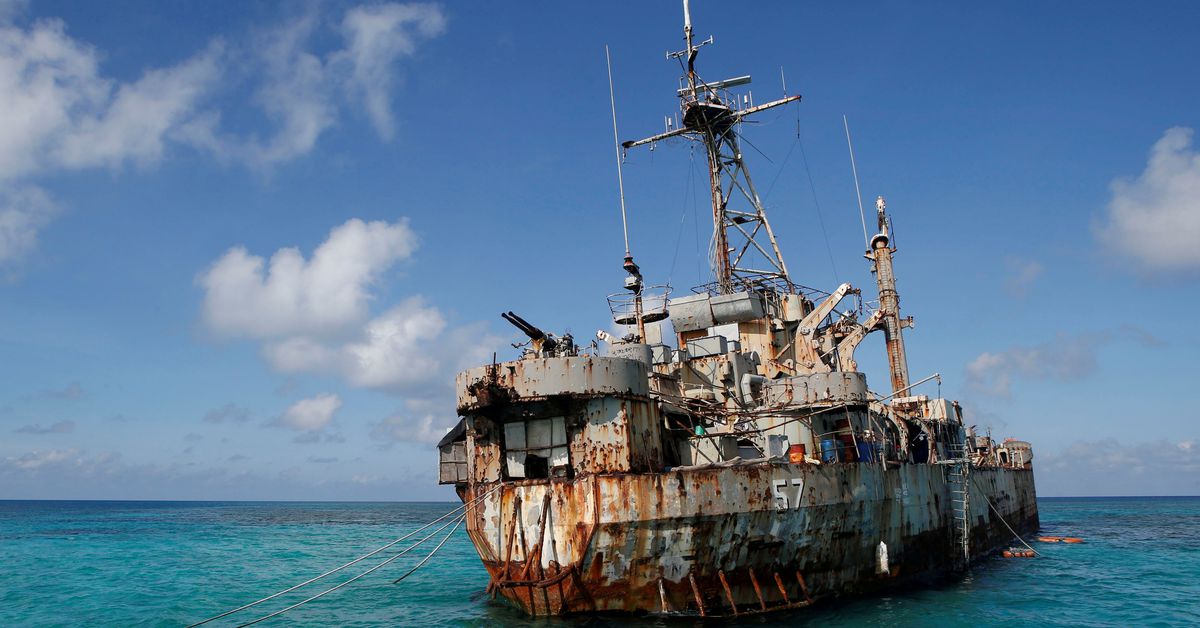 The BRP Sierra Madre, a marooned transport ship which Philippine Marines live on as a military outpost, is pictured in the disputed Second Thomas Shoal, part of the Spratly Islands in the South China Sea March 30, 2014. REUTERS/Erik De Castro/File Photo

MANILA, Nov 25 (Reuters) – The Philippines will not remove a dilapidated navy ship grounded on an atoll in the South China Sea, its defence chief said on Thursday, rejecting a demand by China after it blocked a mission to resupply the vessel’s crew.

Defense Secretary Delfin Lorenzana dismissed China’s assertion on Wednesday that the Philippines had committed to remove the BRP Sierra Madre, which was intentionally grounded at the Second Thomas shoal in 1999 to reinforce Manila’s sovereignty claims in the Spratly archipelago.

“That ship has been there since 1999. If there was commitment it would have been removed a long time ago,” Lorenzana told reporters.

The Second Thomas Shoal, 105 nautical miles (195 km) off Palawan, is the temporary home of a small contingent of military aboard the rusty ship, which is stuck on a reef.

Lorenzana accused China of “trespassing” when its coast guard interrupted a resupply mission for the troops.

China claims the majority of the South China Sea as its own, using a “nine-dash line” on maps that an international arbitration ruling in 2016 said has no legal basis.

The Second Thomas Shoal is within the Philippines’ 200 nautical mile exclusive economic zone, as outlined in the United Nations Convention on the Law of the Sea (UNCLOS), to which China is a signatory.

“We have two documents attesting that we have sovereign rights in our EEZ while they don’t, and their claims have no basis,” Lorenzana said.

“China should abide by its international obligations that it is part of.”

President Rodrigo Duterte on Monday told a summit hosted by Chinese President Xi Jinping that he “abhors” China’s recent actions at the shoal.